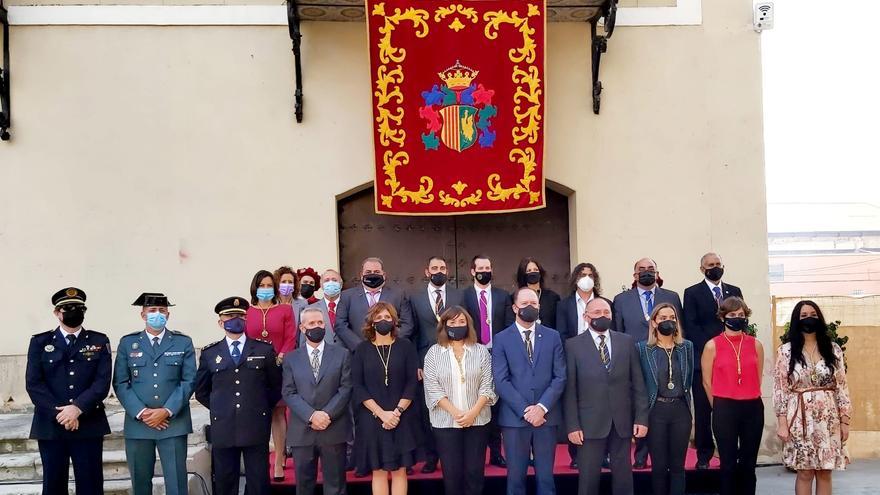 After the raising of the flag from Spain to the sound of the national antheml, the mayor of Orihuela has started the speech by asserting his own concept of “historical memory”. He assured that it corresponded to “talk about identity, roots, history -to do a true exercise of historical memory, he said- of unity, a feeling of belonging, coexistence, equity and even solidarity, tolerance, recognition, of pride, and of respect.As every year, today we celebrate the day of the Valencian Community and in three days we will celebrate the Hispanic Heritage Day, we proudly manifest our Oriolana, Valencian and Spanish identity “.

For Bascuñana at this time Orihuela needs “in a special way to recognize, manifest and defend our identity, our culture and our model of coexistence based on freedom, respect, law and justice, and not in the fashions that we see daily based on the opposite “. In the opinion of the Oriolano mayor” from tolerance and solidarity, but from the firm defense of the essential values ​​of our society, without giving a single step in the achievements achieved over so many years, even centuries of defense and struggles that cost so much effort and blood. Take as an example the Battle of Bonanza, recently commemorated in its fifth centenary ”.

At that time the protest tone has arrived, so common in these interventions of the first mayor on the day of the Community, and in reference to what he calls how the “historical debt that the Valencian Community with Orihuela “. Pulling the lyrics of the Community anthem composed by Maximiliano Thous Orts has assuring that “our region knew how to fight to offer new glories to Spain. From Orihuela, throughout history we have always done it, today we continue to do it and we always will, but we not only contribute to Spain, but also to Valencia “.

In Bascuñana’s opinion “over the centuries we have suffered, even given our lives, in the defense of what today is our community, and today we have to remember it. If other peoples have jurisdiction, we don’t want them, we want justice. We are a proud people accustomed more to giving than to asking, and we are going to continue contributing (…) today we have to ask for the help we need. Because the historical needs, that so-called historical debt of the Community with Orihuela is so great, the damage suffered recently is so great, that by ourselves we will not be able to recover and less to provide the necessary means to progress and face the future as we deserve in justice ”.

Bascuñana has addressed the president of the Generalitat Valenciana, Ximo Puig, vindicating hime the defense of Orihuela and the Vega Baja region. “Today again we want to express to the four winds, that we are proud to belong to our land because our history defines us as we are today, with our language and our idiosyncrasy. This year we remember again that we need water for our fields and orchards, and also for our tourism, that we need a connection fast road with the coast and also through the railway, we urgently need those ipending hydraulic infrastructure, the hospital expansion, etc. That Marshall Plan, that Vega Renhace Plan, must be endowed and made a reality as soon as possible and from the hand of the city councils, you know mine, president, that you have it stretched out and at your disposal. And finally, a thank you to Valencian Council of Culture for their unconditional support so that the Book of Repartimientos (sic) is returned to us by the Generalitat of Catalonia. We respect and want to be respected. We contribute and we want to be valued. We suffer and we need to be supported, helped and defended. President Ximo Puig, president of all Valencians (..) my only request: Our region is this and it is so, we are proud of being the way we are and of our land, we need you to love it, respect it and defend it, as it is ”.

Bascuñana, in his speech, has requested the help of the Generalitat: “Two years ago I began my speech describing what we had suffered just a few days before and thanking the help received from everyone, neighbors and people who from far away practiced the true solidarity, companies, associations, institutions and administrations. In those moments we had experienced both extremes, the best: that exemplary solidarity, and the worst: the tragedy of unbridled nature. Today, two years later, he has recovered a lot, but perhaps the most important thing is still missing, we continue to need help and we continue to wait. I want to thank everyone who in one way or another is working, studying, analyzing, contrasting, debating, etc. to decide what to do to prevent us from suffering another tragedy like that of 2019, but from the gratitude I insist that we need it now. “According to the mayor, the local administration” has done everything in its power and much more that does not correspond to it. “, but” is not enough, the dimension of the effects produced by DANA, and the measures to be carried out to avoid their repetition, is such that it requires the firm and decisive contribution of all administrations without exception, with the will to provide the best solutions that science and technology allow more than those based on current fashions”. This last reference perhaps to the actions that are being proposed by the Confederation, the Generalitat and conservation groups that request interventions with low environmental impact, integrated in the environment and not large infrastructures when dealing with DANA against the Oriolan approach that It involves proposing large infrastructures, as long as they do not affect its urban area.

The Oriolano mayor has had words of gratitude to the media, to the Choir ‘Ginés Pérez de la Parra’ and the Conservatory Band. THe also had a memory for those who died from the pandemic: “Last year 2020, as I said, we could not celebrate this day due to the damn pandemic of the COVID-19, I want to acknowledge the great work done by all and mourn so much suffering for the sick and deceased. I send both to those who have contributed to overcoming this situation and to the victims the greatest embrace of solidarity ”. The act has ended with the official anthem of the Valencian Community and the hoisting of the Real Señera.