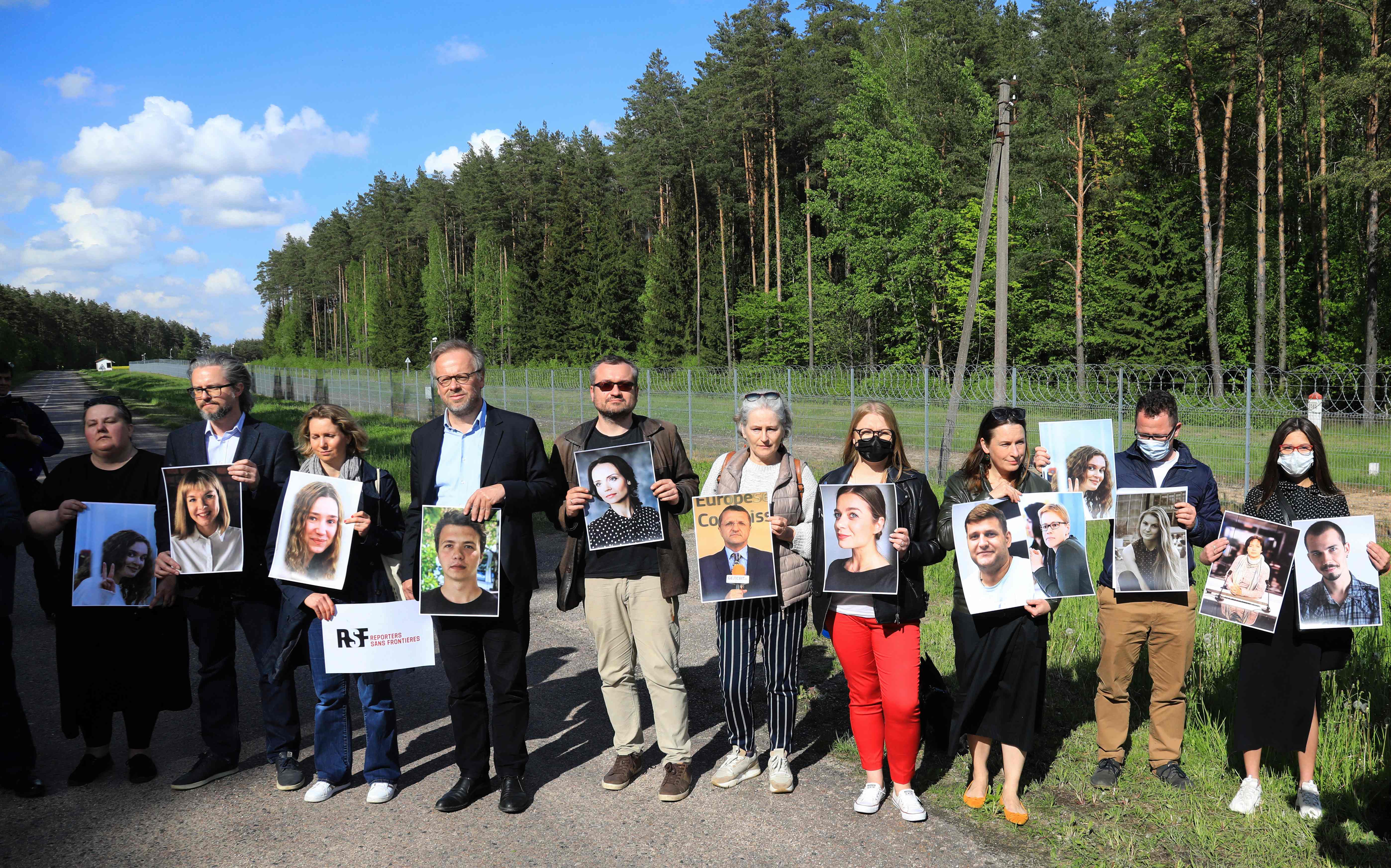 The fear does not seem to go away, until President Aleksandr Lukashenko does, in the midst of a Belarusian opposition forced into exile in neighboring countries, such as Poland and Lithuania. The diversion and forced landing in Minsk of a passenger plane that flew to Vilnius to arrest dissident journalist Roman Protasevich a week ago has made everyone aware, from the opposition leader Svetlana Tijanóvskaya, who has settled in the Lithuanian capital for almost a year. year, even journalists who have also had to flee Belarus for fear of being arrested like so many of their colleagues in recent months, that the “last dictator in Europe” is ready to do anything to stay at the head of a country that has almost three decades ruling with an iron hand. The swift international condemnation of this “kidnapping for terrorist purposes” – as defined by the lawsuit against Lukashenko filed this week by the Reporters Without Borders (RSF) organization in Vilnius – awakens some hope in almost the entire community in exile. that the long-awaited democratic change could be closer than ever. But until this is done, for which everyone agrees that it will be necessary for the West to act this time more forcefully than ever, no one is going to lower their guard. Even less in Vilnius, whose proximity to the Belarusian border, just 30 kilometers away, triggers all the alarms.

“No one can feel safe” after the unprecedented arrest of Protasevich and his girlfriend, law student Sofia Sapega, says Franak Viacorka. This former journalist has served as Tijanóvskaya’s adviser since, in September 2020, he decided to join his team in Vilnius, where several dozen collaborators organize what they hope will be the democratic future of Belarus from a modern office building – today almost empty due to the pandemic – in the business area of ​​the Lithuanian capital. “They can follow us, watch us, and hunt us anywhere. We have to be very careful when catching a flight, meeting people during our travels. At any time they can come with a car with diplomatic plates, put us in the trunk and take us to Minsk, because diplomatic cars are not monitored at the border, ”Viacorka sums up an insecurity that makes everyone who visits Tijanóvskaya’s headquarters must sign a confidentiality agreement committing not to reveal data that allows identifying the exact location of the offices.

This precaution that borders on paranoia, something that Belarusians such as blogger Volha Pavuk, also exiled in Vilnius, attribute to having lived for decades under an ex-Soviet regime that encourages denunciation to divide society and thus control it better, is not exclusive to the persecuted politicians or journalists. “I try never to go down the street alone,” says Dania, a computer scientist from the outskirts of Minsk who arrived in Vilnius with her two children in December after her husband, Anton, a judo teacher whom she has not seen since , was arrested and sentenced to six years in prison for throwing paint at a car during one of the protests against Lukashenko they attended together. Dania, who has applied for the status of a political refugee in Lithuania and prefers not to give her last name, has been going every day, like another twenty Belarusian exiles, to the Western embassies to demand more sanctions against Lukashenko since the arrest of Protasevich and Sapega. Along with her is Alesia Prokharava, who arrived in Vilnius with her clothes just over a week ago. His son Vitaly was arrested in February. He has just reached the age of majority, in jail. “Political prisoner at 17!” Exasperated this woman who was also forced to rush out of her city, Zhlobin, when she learned that “the police were coming” for her.

Hanna Rusinava is a correspondent for Belsat, a Polish opposition-court network targeting Belarus. Two of her colleagues have recently been sentenced to two years in prison in Minsk. Rusinava covers, like every day, this new protest of the growing Belarusian community in Lithuania. In the last nine months, the Lithuanian government has granted more than 16,000 long-term visas to Belarusians, including nearly 3,500 for humanitarian reasons, according to the AP agency. Also Rusinava, who has been in Lithuania for 11 years, has been more concerned since the plane incident. “We no longer feel safe or abroad, we don’t know what else Lukasehnko could think of,” he says. To this is added, he adds, the “fear for the family” that continues in Belarus. A fear of reprisals shared by exiled activists and journalists, and this is not another paranoia: recently, the Belarusian authorities detained several relatives of a journalist from Belsat who had fled to Poland and threatened to put them in prison if she did not return. “My mother and sister are in Belarus and I feel anxious, I don’t know if they can do anything to them,” says blogger Pavuk, who with her husband Andrei runs a YouTube program Rudabelskaya Pakazuha, whose popularity provoked the ire of the regime. Following protests over allegations of fraud in Lukashenko’s August elections last year, Andrei Pavuk was detained for ten days. They have been in Vilnius since September, when after a trip abroad, the blogging couple, who have two young children, decided not to return to their native Oktyabrsky after receiving a subpoena that did not bode well.

Although the situation for journalists in Belarus “has never been easy”, explains Hanna Liubakova, a former Belsat and Radio Free Europe correspondent who also had to leave her country in October, “what has happened since last year I call it a war against journalists, because although Lukashenko never liked us, now he just wants to arrest us or for us to flee. It is a planned attack against freedom of expression, ”he says, recalling that the arrest of Prosatevich, no matter how serious, is the latest in a long chain of attacks against the press that last week also led to the closure of Tut.by, the most popular independent digital newspaper in the country, and the arrest of fifteen of its employees.

Freedom of the press

RSF, which has dropped Belarus five spots – to 158 out of 180 countries – in its 2021 world press freedom rankings, estimates that at least 24 journalists are currently in arbitrary detention in that country. Belarusian opponents and journalists add to the figure to almost fifty if bloggers are also counted.

Still, no one is considering throwing in the towel. “We will not resign, we will continue to tell what happens, we have to teach it because, if we do not do it, who is going to tell it?” Says Rusinava. “It is a challenge, we do not want to be heroes, but there is a feeling of responsibility, the power of information is crucial,” agrees Liubakova. In addition, he notes, “when your friends and colleagues are in prison, you cannot leave.”

The same sentiment guides Tijanóvskaya’s team. “The regime has shown that what it said about its willingness to crush opposition politicians, journalists and human rights activists abroad is real. We are aware that we have a higher level of risk, but this will not affect our work, ”says Valery Kavaleuski, who left his job at the World Bank in Washington to join Tijanóvskaya’s team as representative of Foreign Policy in December. “We will not stop. Just as Roman’s channels continue to work on Telegram, we will continue to work whatever it takes to achieve a change in Belarus ”.

The objective, he says, has not changed: “We want free and fair elections in Belarus as a way out of the crisis.” What has changed, both Kavaleuski and Franak Viacorka acknowledge, is the message, which is now bolder. “Before we were very careful with what we said, but we must admit that we are dealing with a terrorist regime and that it will not stop, that it will continue to threaten and terrorize not only Belarusians, but the entire continent,” Viacorka explains. And that is an opportunity that they cannot miss, stresses Kavaleuski, who these days has accompanied Tijanóvskaya on some of the trips to various Europeans that he has undertaken since the dissident journalist’s arrest. “We feel that there is a momentum and we want to take advantage of it, because now the Europeans are ready to listen.”