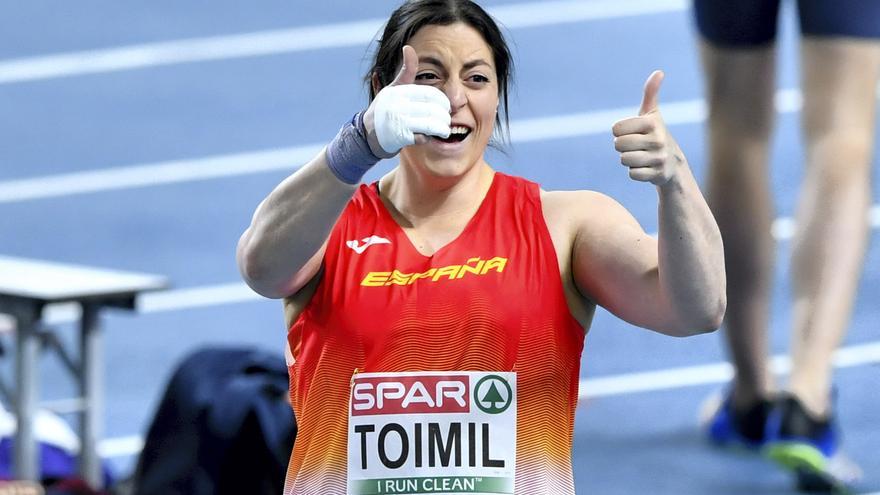 Galician Belén Toimil This Thursday, he majestically debuted the Spanish participation in the European indoor athletics championships by beating the national weight record with a mark of 18.64 meters that has qualified him directly for the final and for the Tokyo 2020 Olympic Games .

Toimil was the spearhead of a great Spanish performance on the opening dayIn addition to her, Jesús Gómez from Burgos and Jesús Fontes from Granada in 1,500 and Lucía Rodríguez in 3,000 from Madrid.

The old Spanish weight record, which had turned 25 on February 25 in the possession of Martina de la Puente with 17.94, was shattered in the first attack by Carlos Burón’s disciple with her newly acquired rotary technique.

🏆The European Athletics Championship starts in Torun and it cannot be done in a better way for the Spanish delegation !! # Torun2021

Martina’s congratulations were immediate on social networks. “Congratulations, Belén Toimil Y Carlos Burón. Thank you for this gift to athletics, “he wrote on Twitter.

Toimil, 26, who had joined the team at the last minute thanks to the play-offs by European ranking, had no need to continue competing. Its mark of 18.64 is the fourth best in Europe this year and 18.40 was requested for go directly to the final.

It is also about best Spanish release ever, including outdoor brands, whose list is headed by the Murcian Úrsula Ruiz with 18.28 meters.

¡BRUTAL @Beautiful on his debut in a Euroindoor!

Toimil had just been proclaimed Spanish champion in Madrid with a launch of 17.81, shortly after achieving 17.86 in Barcelona on February 6, just 8 centimeters from the national record. The athlete from Mugardos (La Coruña), who has already competed in an outdoor World Cup (London 2017), faces in Torun, however, her first indoor Europeans.

In the first series of 1,500 Jesus gomez, a bronze medalist two years ago in Glasgow, started with the second best record of the participants (3: 36.32). The Burgos went back to avoid stumbling but in the second lap he progressed to second place, behind Filip Ingebrigtsen. He changed 300 meters from the end and won with authority: 3: 40.75.

Great start of #Spain Athletics on the 1st day in Toruń

✅1 record for Spain, and minimum for Tokyo
✅4 athletes go to the final
✅3 Personal Brands
✅A competitive attitude of 🔟

There is still a long way to go, it will not be easy, the level is very high

The grenadian Ignacio Fontes, one of the debutants, ran the second heat in the center of the group, advanced by three laps, caught up with the Hungarian Szogi, took the lead at 300 meters and ended up winning with 3: 38.68, the best mark of the first round.

Abderrahman El Khayami, the third Spaniard of 1,500, came out in the fourth knowing that, if he did not reach one of the two direct places of finalist, he needed to beat his personal best by running below 3: 41.07 to enter the repechage for times. With 3 laps remaining, he lost positions and sank on the last lap, finishing 11th with 3: 49.34 in a race dominated by defending champion Marcin Lewandowski from Poland with 3: 39.78.

The Madrilenian Lucia Rodriguez he got into the final of 3,000 with a mark of 8: 56.71 that gave him fourth place (after the disqualification of two rivals for stepping off the track), while Marta García and Blanca Fernández were eliminated.

In the first series, Marta Garcia, Champion of Spain, she occupied the sixth position until entering the last lap, when she was overtaken by two rivals. The Leonese engineer, eighth, made the best mark of her life (9:02 a.m.), but it was not enough to reach the final. The first four and another four passed by times.

Blanca Fernández and Lucía Rodríguez they shared the second race. They took forward positions from the start and entered the cut of six but, while Rodríguez held on until he lowered his personal best by almost 8 seconds, Fernández yielded in the last thousand and finished eleventh with a time of 9: 11.06.