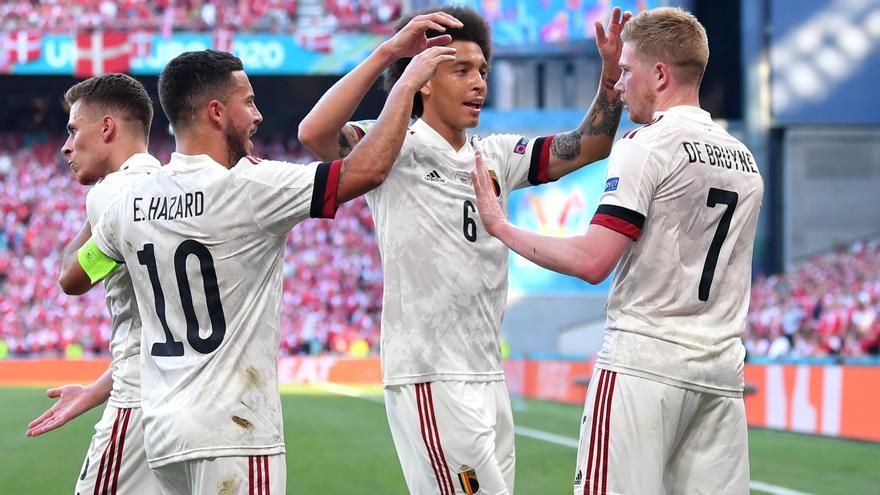 Two plays of Kevin de Bruyne, which debuted in the Eurocup, were enough for Belgium to defeat (1-2) a moving Denmark, which remade itself from the drama lived five days ago by the Eriksen crash and brushed the stain.

Belgium was more effective and reversed a bad first half to come back, achieve their second victory and close the pass to the second round. Denmark, who deserved the victory this Thursday but has not yet added, can only beat Russia and hope that Finland does not score against the Belgians.

The game started with surprises from the changing rooms. Kasper Hjulmand opted to change the system and play with three centrals, putting the very young Damsgaard as Eriksen and with Braithwaite and Poulsen leading the way.

In Belgium there was speculation with the ownership of Witsel and Eden Hazard, but in the end Roberto Martínez kept almost the same eleven that thrashed Russia, with the forced loss of Castagne, operated for six fractures in the face by a fortuitous blow, and the change of Boyata. Denayer and Meunier took their places.

There were many doubts about the mood of the Danish players before the game. But the one who seemed most affected by the atmosphere was strangely Belgium, who did not give a right in the opening section, with infrequent errors in the exit of the ball, unable at times to overcome the oppressive Danish pressure.

Denmark was a gale. He ate Belgium in the first minutes, in which it entered everywhere. In a gross mistake of Denayer, Højbjerg recovered, passed to Poulsen, and this one defined crossed. Not even two minutes had passed.

Maehle, a dagger from the left, had the second, also Wass in a header. Braithwaite and Poulsen drove the Belgians crazy with their continuous unchecking to space, while the very young Damsgaard, whom Hjulmand trained in the Danish Nordsjælland, did not weigh the responsibility.

The Sampdoria player was one of the best of his team in a great first half. Sure in the touch, well in the distribution, he brushed the goal in individual play with a shot that touched the post.

By then Belgium had balanced the game a bit. At least he had more of the ball, but barring a header from Mertens at the start, there was no news from him in the Danish area. Kjær nullified a desperate Lukaku, to which balls did not arrive in conditions.

Martinez took Mertens off the field at half-time and brought De Bruyne in, who was returning to the pitch three weeks after sustaining a double fracture to his face in the Champions League final.

The best player in the Premier League this year went on to play a false nine, with Lukaku and Carrasco on the wings.

Denmark was still scary, although less so, like a deflected shot by Delaney or a great play by Damsgaard, dribbling several Belgian players on the edge of the area.

But Belgium doesn’t need much to score. On his first approach, Lukaku threw power and carried the ball in front of Vestergaard, rebounding included. Kjær, imposing until then, slipped and left open a highway that De Bruyne took advantage of the opportunity to give Torghan Hazard the goal almost to an empty goal.

Belgium smelled blood. Witsel and Eden Hazard went out onto the field. Denmark got doubts and went on to play with Braithwaite as the only clear point and Damsgaard making more of a hook.

Y De Bruyne appeared shortly after to culminate with a whiplash from outside the area a great Belgian combination, just past Eden Hazard, which left some details.

Denmark already played it desperately, with the resource of the giant Cornelius and later putting the extreme Skov Olsen by a central. Braithwaite, tireless throughout the game, threw a left foot after several breaks, which forced Courtois to pull out a great hand and divert to corner.

Belgium threatened to close the match in each against. De Bruyne had it again.

Already with little strength and without too many ideas, Denmark pulled the heroic, but Braithwaite’s header went to the crosshead. And a shot from Jensen, narrowly high.

Against Finland, Belgium will be able to continue fine-tuning its set-up for the crosses. The Danes, who seem recovered from the loss of their star, who is still convalescing in a hospital, have one more night to dream, in Parken, against Russia.

Incidents: Match of the second day of group B of the European Championship played at the Parken in Copenhagen before 25,000 spectators. Belgian players dropped to their knees before kick-off as a signal against racism, while their rivals applauded the gesture.