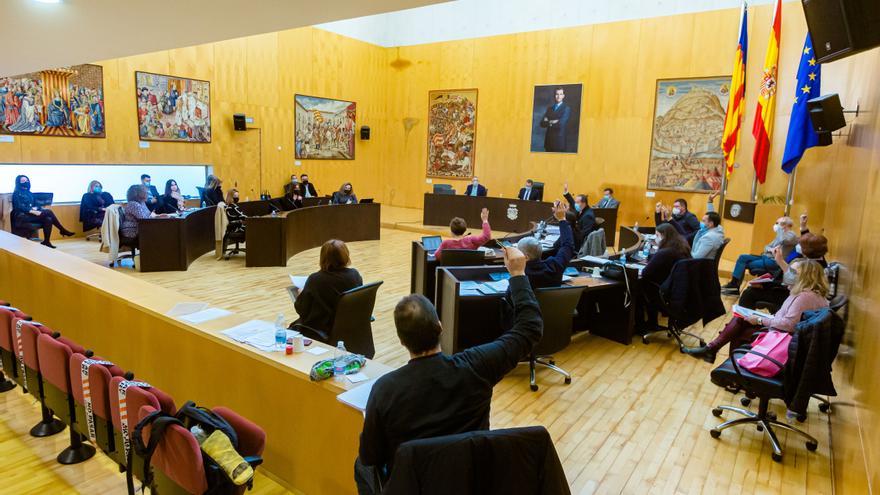 The plenary session of the Benidorm City Council has approved this Wednesday, with the sole vote of the local government, the PP, the municipal budget for the year 2021, which reaches 115,470,629.53 euros in the expenses section and 116,632,811.50 euros in the income section, throwing a surplus of just over 1.1 million.

The councilor for the Treasury, Aída García Mayor, explained that these accounts arise in a “situation conditioned by the pandemic ” and they guide the City Council’s action to contribute to “overcoming the crisis”, helping “the resident population, the families of Benidorm” and collaborating “in the reactivation of the local economy”.

García Mayor highlighted that 2021 “is the first budget to be drawn up after the early cancellation of the Adjustment Plan“, And that it” once again raises the ceiling of social spending in the history of the municipality, exceeding 25 million euros, reserving more than 6.2 million for direct aid to families and the productive fabric “to which” the rest of the resources for expenses and social attention are added, such as scholarships or benefits of Social Welfare and Employment and other areas, up to 25 million euros in policies and social resources ”.

However, the mayor has remarked that “social spending items, especially aid, are expandable if the Government of Spain authorizes the City Councils to use the remaining Treasury for this purpose.”

In addition, the budget includes “a increase in investments, which stand at 24.2 million euros”. Of these, 15,093,325 euros will be provided directly by the City Council, while the remaining 9,498,408.10 euros come from contributions from other public administrations and from the development agents of the El Murtal and Industrial partial plans and linked to the developments of these soils.

The head of the Treasury has clarified that “the increase in investments” is marked by “the momentum of projects that have subsidies from the various administrations, both European, national, regional and provincial ”to initiate the actions included in the EDUSI or those financed by the Institute for Energy Diversification and Saving. In total “more than 7.5 million euros”.

Likewise, García Mayor has reported that the municipal contribution will be paid through bank loans, an amount that will be reduced by the same amount obtained from the remainder of the Treasury once the 2020 budget is settled -in March-, and that it is expected that amounts to several million euros.

With regard to the Participatory Budget, the item allocated to the neighborhood proposals reaches in 2021 “a record of investment, with 605,000 euros”, above the 5% that marks the local regulation, and that “will go to the proposals transferred by the neighbors”, explained the mayor.

Prior to the budget debate, the amendments raised by the two opposition groups. Unanimously, an amendment to Cs has been approved to increase the amount allocated to Civil Protection by 10,000 euros; as well as another from the same group to increase by 30,000 euros the resources allocated to awareness activities and detection of gender violence in educational centers.

Regarding the rest of the opposition amendments, four from the PSOE and another twelve from Cs, García Mayor explained that “almost all of the amendments proposed to withdraw resources from municipal investments included in the EDUSI to inject those funds into Chapter 2”. However, “the government of Spain still does not allow us to finance expenses of chapters 2 or 4, even if they are aid, neither with our savings, the remainder, nor with bank loans, only investments in financially sustainable works, which is exactly how it goes to pay for the part of those EDUSI projects included in the Annex of Investments that corresponds to the City Council ”. Consequently, “technically and with the Law in hand, the amendments presented by the opposition cannot be approved.”

In addition, the mayor has referred to the fact that “the calendars of the projects to be executed by the EDUSI are agreed with the State and non-compliance – not finishing them on time due to lack of funds – would mean losing the European subsidy”, which for the next three years amounts to 10 million.

Among the 45 investments included in the annex to the budget, 15 correspond to multi-year projects and which, consequently, will start this year and will be completed in subsequent years. Among them are the three projects linked to EDUSI: the adaptation of different neighborhoods such as Alfredo Corral and the upper part of l’Aigüera and Els Tolls -2.1 million-; the remodeling and conversion of the Plaza de Toros into a hotel for associations, civic and social center -2.5 million in 2021-; the construction of the shelter in the Parque de la Séquia Mare -1.2 million- and other actions on public roads -3.3 million-. Also on a multi-annual basis are the renewable energy and sustainability projects subsidized by the IDAE –more than 4.3 million-.

In addition, with 100% municipal resources, the expansion of the cemetery -1.2 million this year- will begin, and the tramway of Benidorm with the elimination of level crossings -750,000 euros-. The budget also includes 2.4 million for access to the industrial estate.

Among the projects that will be fully executed in 2021, the creation of the Aula del Mar on the site where the house of José Martínez Alejos was located, on the beachfront of Levante, stands out, which will be carried out within the Tourism Sustainability Plan and is valued in 660,592.99 euros; the equipment of the Cultural Center -920,000 euros-, the improvement of l’Hort de Colón -105,000 euros-.

Criticisms of the opposition

The debate on the municipal budget has been plagued with criticism from the opposition towards the local government, which both the PSOE and Cs have accused of a lack of dialogue, lack of will to reach consensus, and have reproached that, in the opinion of both parties , has allocated “a lot of money to works and little to social aid.”

The socialist spokesman, Rubén Martínez, has lamented that “despite the harsh circumstances we are experiencing, and despite the innumerable offers made to agree on budgets, we have found a castled PP who has not wanted to listen to anyone and that he has not even deigned to negotiate the minimum. I thought they would be up to the task, but I was wrong “, after which he has also criticized that not a single of the amendments proposed by his group was accepted, which they planned to raise above 10 million aid to families and companies due to covid-19.

Meanwhile, the spokesman for Ciudadanos, Juan Balastegui, has also regretted that the local government handed them the draft budget on December 23 “in the afternoon, when we had Christmas Eve, Christmas and the weekend in the middle of” and that only There have been two business days to be able to study the accounts in depth and consult doubts with the technicians. “We would have liked them to have taken the opposition more into account,” said Balastegui, also stating that this budget “is not a budget in accordance with the situation generated by the pandemic.”