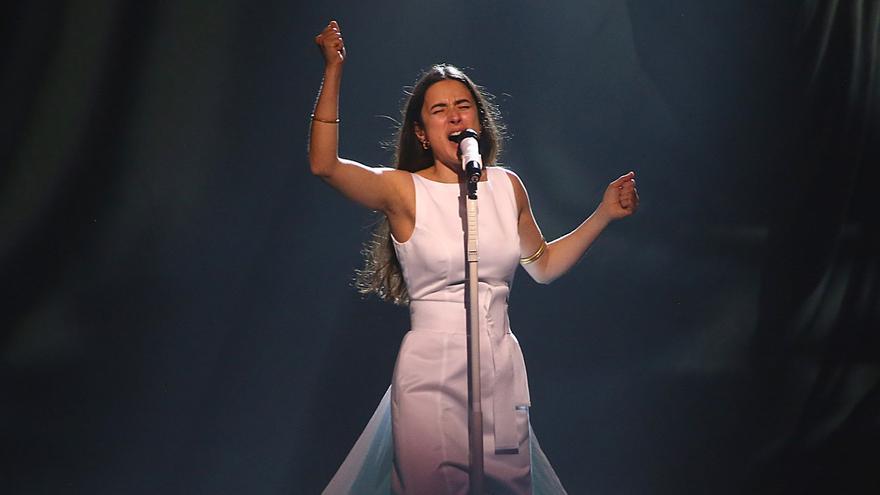 Chanel, Tanxugueiras, Blanca Paloma and Varry Brava are closer to obtaining the coveted passport to Turin, to the Eurovision Song Contest 2022. This was decided by the professional jury and the viewers after a gala presented by Alaska, Máximo Huerta and Inés Hernand who, without Without a doubt, it returns to the city of skyscrapers, with the Benidorm Fest, in the focus of musical competitions, in the Eurofan universe. In the first semifinal the candidacies of Azúcar Moreno and Unique fell by the wayside, while the two Alicante proposals triumphed. It will be today when the other four themes that will compete on Saturday in the grand final are selected.

Red leather, sequins and great disco balls to honor a cross-generational icon. Varry Brava from Alicante were the first to go on stage at the Palau D’Esports L’Illa to interpret the proposal with which they aspire to get the ticket to Italy, the song Raffaella. Inspired by Italian disco music, by the inexhaustible energy of the eternal Carrá, the group from Orihuela managed, from the first chorus, to start the applause of an audience thirsty for a show, eager for the show that Benidorm Fest promised. And the truth is that the trio formed by Aarón Sáez, Óscar Ferrer and Vicente Illescas did not disappoint, far from it. They managed to transfer to the audience one of those open-air festivals that are sorely missed in years of a pandemic.

Blanca Paloma did not go unnoticed with her Secreto de agua, a theme that combines tradition and contemporaneity. The powerful voice of the singer of El Altet, the elegance of a sober but magnetic performance, silenced the audience. He did not need too many elements in his staging. A simple white dress and a striking game of fabrics that went beyond the limits of the stage, in which a dance of lights was projected that evoked a calm sea. Before her came the turn of the veterans, of the Salazar sisters, who at Eurovision 1990 obtained a remarkable fifth place with their iconic Bandido. Because Azúcar Moreno, which three decades ago were presented to Europe as the Sugar Brown, arrived determined to represent the homeland for the second time, as Raphael and Conchita Bautista did in their day, this time with all the Posturing. Their revamped verbeneo, how could it be otherwise, pushed the audience to start clapping, to enjoy the native flamenco with which they opted to Spanishize on stage, but, finally, they were left out of the race.

Blanca Paloma and Varry Brava, to the final

As in any Eurovision-inspired gala, the touch of pyrotechnics could not be missing, which on this occasion accompanied the staging of the night’s boy band, the guys from Unique. With their song “Best”, of triumphalist inspiration, they ran around the stage with eye-catching somersaults and choreographies that gave way to one of the favorites in all the pools. The Galician folk of Tanxugueiras with their song Terra was the fifth performance of a night in which, for the first time, co-official languages ​​were heard as a proposal to represent the cultural diversity of Spain in the largest televised musical show in the world. The one to which Joan Manuel Serrat could not go in 1968 to interpret La, la, la because he was prevented from singing a song in Catalan that, finally, would give Spain its first gold in Eurovision, with Massiel as interpreter. This time, the trio of Galician singers did represent the national folklore and in style, with a proposal that has phrases in all the official languages ​​of the State and in Asturian, through a show in which there was no lack of dancers with the torso discovered, in skirts and dancing muiñeiras. Disruptive, to say the least, and much applauded was his time on the Benidorm Fest stage with a very powerful message that advocates eliminating borders and celebrating the diversity that represents Spain and also Europe. An impeccable performance full of strength with a unique style.

And it was Chanel and her carefree SloMo that closed the gala with an explosive song, a groundbreaking dance hit inspired by urban rhythms, the one that knew how to combine an energetic choreography with a voice that does not go unnoticed. So much so that she finished first in the ranking. Salvador Sobral, winner of Eurovision 2017 and Marlon put the finishing touch to the evening as guest artists.