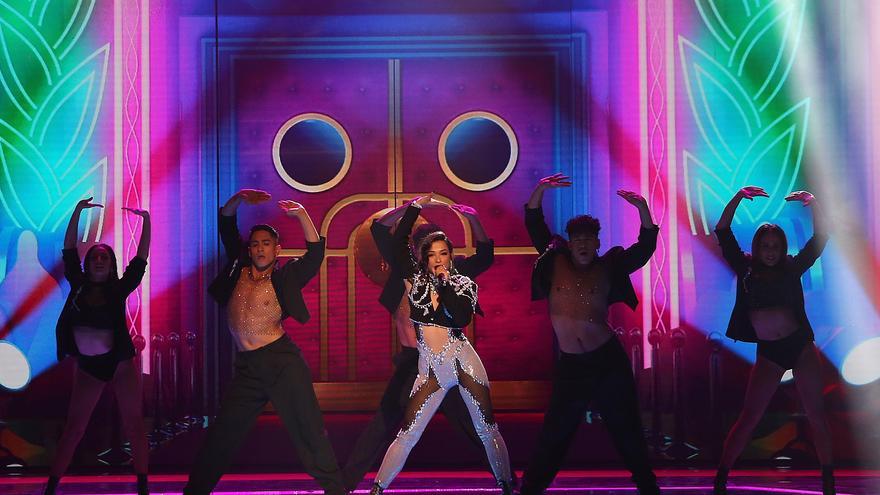 Chanel Terrero (Havana, 1991) will represent Spain in Eurovision 2022 after winning the Benidorm Fest, the contest organized by RTVE to choose a candidate.

Until last Wednesday, the day of the first semifinal, the young Cuban —actress, singer and dancer with an extensive curriculum on television, cinema and theater in our country— was a true unknown to the public. The song she performs, SloMo, was first posted on YouTube in late December and had barely hit 100,000 views by the time the festival started. SloMo is the first and only song of the artist and that of the Benidorm Fest his first performance.

That a singer with no experience in the music industry has won first place in the contest (thanks, in large part, to the votes of the jury) cannot be explained without the business machinery what is behind

Terrero is the bet of BMG, a record label belonging to the German conglomerate Bertelsmann, also owner of the Penguin Random House publishing house, which together with Planeta leads the book market in Spain. Only she and the already consolidated Azúcar Moreno (BMG) and Rayden (Warner Music) have the support of a major label.

Tanxugueiras and Rigoberta Bandini, the two favorites of the publicThey do not have such a trick. Bandini is not associated with any label and the Galician band released their first album independently. He then signed with Calaverita Records, a small firm from Madrid founded in 2018. In addition, both Terra What Ow mom, their songs, are composed by them. Aída Tarrío, Olaia Maneiro and Sabela Maneiro sign their own proposal while Rigoberta Bandini (the stage name of Paula Ribó) shares the authorship with her partner, the comedian Esteban Navarro, who participates in the performance.

Chanel, according to the words of one of the authors of her song, was sought out to interpret SloMo.

“I had the subject for a while and we were looking for someone who could defend it in the most powerful way, more genuine and with more sass [actitud], as they would say in English”, explained Leroy Sánchez, the composer, in a recent interview on Radio 5. “I had the opportunity to see Chanel, to see what she did, and I said: ‘It’s her’. This song is hers and it’s going to be incredible. We met and it was all super incredible. We are still working on the project.”

Leroy Sánchez is not new to RTVE. Born in Álava 31 years ago, he triumphed while still a teenager by uploading his songs to YouTube. At the age of 20, he moved to the United States, first to Miami and then to Los Angeles, where he currently resides. Sánchez composed the song that Spain took last year to Eurovision: I’m going to stay, by Blas Cantó, which ranked 24th out of 27. He is also the author of Make you say, the song that Sara Deop performed at the Benidorm festival, with a style and staging very similar to that of Chanel.

for the choreography of SloMo —very elaborate and one of the main strengths of the theme—, Chanel’s candidacy counted on the work of Kyle Hanagami, a choreographer from Los Angeles who has created dances for Jeniffer Lopez, Ariana Grande and Britney Spears. “I saw her on Instagram. She hadn’t even released any songs, she didn’t have a huge fan base, but she had talent and passion so I contacted her to see if I could help her make her dreams come true,” Hanagami explained. Instagram. “This is the product of his dream.”

Although RTVE’s budget for the organization and broadcast of the Benidorm Fest includes some concepts that cover the costs of the participants —in addition to accommodation and meals, there are items for the rental of equipment and instruments and technical means, according to unveiled Newtral through a request for transparency—, the bulk of the expense is on your account.

“A part is assumed by the artists,” explains Juanma Fernández, founder of the medium specialized in television Blouse. “And in the most elaborate staging it shows. I have spoken with people like Javiera Mena or Xeinn and recognize that they have palmed pasta”. As this newspaper has been able to learn, the dresses of Rigoberta Bandini and her companions came entirely from her pocket.

Costumes, dance corps, choreographers… A good performance requires money. Chanel was, in fact, the only one to wear a suit in the semifinal and a different one in the final: in both cases, jumpsuits with transparencies and rhinestones designed by the famous drag queen Carmen Farala.

“It depends on the team of each artist. There are record labels that have invested what they have seen fit,” adds Luis Mesa, a journalist specializing in Eurovision. “From now on, RTVE is in charge of all this. In fact, Chanel’s dresses are from Farala and in the press conference after the final they asked her if she was going to take them to Eurovision. The head of RTVE quickly said that it would have to be discussed.

Also Read  Guns, ammunition ... even a ship: how Oath Keepers planned a gun coup | attack on the united states capitol

Joseph Manuel Silva He is a journalist, lawyer and a good connoisseur of the music sector. For years he worked with the international artist Álvaro Soler and reflected everything he learned about the business in a book. In addition, he was a director of Televisión Española between 2007 and 2012 and presided over the public entity in 2012, when the presidency was rotating.

“At that time, after the years of Operación Triunfo, we received a proposal to open the Eurovision selection. It was the year of Rodolfo Chikilicuatre. That got out of hand“, he relates. “It was a bet by Buenafuente presented as a joke from another chain. We had a candidate, La Casa Azul, with a song, Revolución Sexual, very good. But the candidacy was open and Chikilicuatre won. A lesson came out of that: never fully open to the public, because something like that can sneak in.”

Since then, he continues, RTVE has tried to find the right system to select good candidates. When Silva —already out of the public company but still linked to music— learned that the Benidorm Fest was being held, he reviewed the rules and intuited that, due to how the voting system was set up, it was very possible that TVE had its “official candidate”.

The mechanics was that 50% of the vote was decided by a jury made up of three people from RTVE and two international experts, 25% a demographic jury of 350 people (of which there has been hardly any information) and the remaining 25%, the public’s televote.

“People have to understand that this is big business for authors and record companies. When the song is played on television or radio, it generates money in royalties,” he says.

In previous editions of Eurovision, RTVE imposed on artists to keep 50% of the editorial rights generated, as revealed by Bluper. This year, however, the network has given up on making money back from the chosen song and has allowed 100% of the rights to go to the authors. In the case of Chanel, this money will go to songwriters and producers, since she is the interpreter.

Why has the jury supported his candidacy above the rest if he is not going to make money with his song? “I think the correct word is synergies,” says Silva. “It’s probably the product of a pact. RTVE is interested in someone with a team behind. But they are agreements that go further. The record companies have representation, booking and RTVE works with them. I am sure that, as things have gone, in high places they would have wanted Rigoberta or Taxungueiras to win but that RTVE had it very armored from a commercial point of view”.

Also Read  CCOO and UGT, on pensions: "The government's ability to complicate the negotiation has no limits"

The journalist emphasizes that the best interpretation of the final was “without a doubt, Chanel’s. Staging, second costumes, dancers, professionalism… That’s when I investigated what was behind it and I understood everything. She participates in very different conditions to the rest,” he says. “A project like this is not presented if you do not know that you have a 99% chance of winning. It is not a tongo, nor a scam. it’s business“.

Those who earn real money in Eurovision are the authors of the songs, in copyright. That’s why neither Rigo nor the Galician women, authors of their songs, have gone. It goes like this And I know very well how it works. The important thing is not to win but to generate rights for the authors.

The founder of Bluper, who has spent the whole week in Benidorm covering the festival, explains that the name of Chanel began to be heard on the first day.

“There was talk in the gossip that he was going to win. It was the only candidacy with a major record company, which had left money on composers and choreographers,” he says. “I think he can give a very good show and that he will get a great place in Eurovision. But there is no authenticity: it is a product that has been created”.

RTVE has not published the breakdown of the votes of the jury or the public, but aware of the controversy that is being generated around the winner has issued a crisis statement to open “a participatory dialogue” that improves the process in future editions.

“The reaction of the public does not do justice to the project that exists. The artists have been exposed to a very demanding experience and, after all this week, the reaction leaves a bad taste in the mouth,” concludes the Eurovision expert Luis Mesa. “As soon as the winner is revealed, we return to the usual toxicity. And what is sought is that this progress over time.