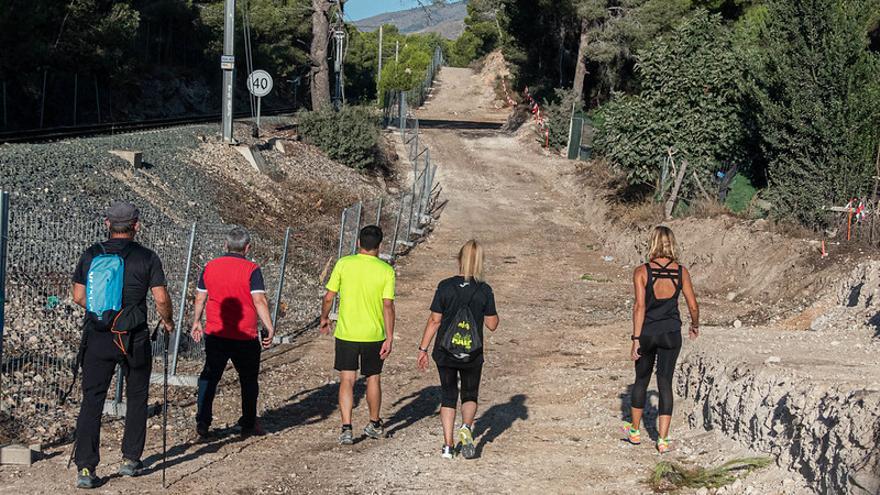 New trails, recreational and games areas and the recovery of the old train track in addition to promoting biodiversity. This is the project that the Benidorm City Council will carry out in the area of ​​El Moralet and for which the tender has already started. This action is included in the Sustainable and Inclusive Urban Development Strategy (EDUSI) and it will reach a green area of ​​just over 102 hectares.

Comprehensive action in this very extensive green area, as explained by Mayor Toni Pérez, which extends from Beniardá Avenue and the vicinity of the Guillermo Amor Sports City to La Cala, is valued at about 910,000 euros. An amount that will be financed in part with municipal resources and in part with European funds, since the City Council has received a grant of 10 million from the EU for Edusi.

The project proposes to improve the Existing roads, in many cases open by the passage of people or animals that travel this area daily. These roads will be grouped into paths (for pedestrian traffic), cycle-paths (for pedestrians and bicycles) and vehicular cycle-paths (wider than the previous ones to also allow the passage of emergency vehicles), which will have license plate lighting solar and signage. In addition, in collaboration with the Benidorm Athletics Club and the Mountain Section (BTT) of the Benidorm Cycling Club have been delimited three main tours, each with a degree of difficulty.

The action also foresees the construction of three recreational areas next to the wooded area closest to the Vía Parque, in the vicinity of the access road to Moralet from the Ciudad Deportiva and after the dissuasive car park on Avenida Beniardá. These areas will have picnic areas, a play area and bio-health and garbage collection. In addition, in the last two, landscaped areas with palm trees and aromatic plants will be adapted.

In addition to tree pruning, it is planned enrich the area with native vegetation and promote biodiversity by creating refuges for birds. On the ethnological level, the project includes the reconstruction of the dry stone terrace walls, a type of construction declared a World Heritage Site by UNESCO.

Pérez stressed that “this Moralet project promotes and consolidates the great green belt of Benidorm, in parallel to the urban fabric of the city and that is added – and even in some cases connects – to the rest of the great green infrastructures of the city: Foietes Park, l’Aigüera Park and Séquia Mare Park. Once the project has been tendered and awarded, the execution period for the set of actions is six months. The City Council’s forecast is to be able to start work this year.

“This is one of the most emblematic projects of the EDUSI, because it involves putting in value and at the disposal of the citizens” the main natural green area contiguous to the urban fabric through a network of trails and cycle-paths, recovering the old route of the ‘train’ as a greenway and “generating spaces for leisure and recreation, while promoting biodiversity and rescuing ethnological elements of heritage value,” according to the mayor.

Pérez indicated that “we are talking about an area of ​​high landscape and environmental interest of more than one million square meters, which with this action we transform Benidorm’s green lung into accessible, fully passable, signposted and with environmental services to explore its full potential” , has stressed. “We are convinced that as soon as this project is developed, El Moralet will become a great pole of attraction for lovers of running, mountain biking and for those who enjoy walking through nature, as well as a space for leisure and recreation. relaxation ”, he added.

At the moment the City Council already has in place, in different phases of processing, four other projects framed within the EDUSI. Both those to improve accessibility in Colonia Madrid and Els Tolls are in full tender. In the process of adjudication is the project for the rehabilitation of the bullring and construction of an annex building; While work is already under way on the execution project for the youth hostel and interpretation center in the Parque de la Séquia Mare.