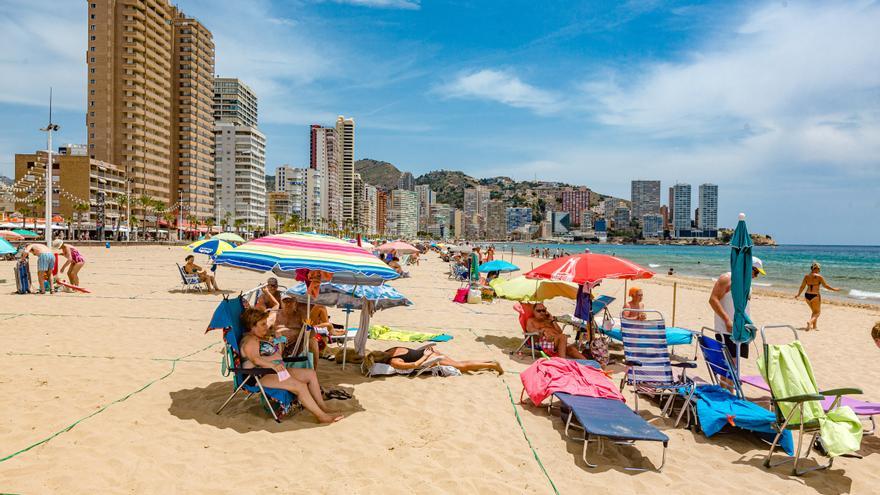 The proposal that the mayor Toni Pérez will raise to plenary session establishes the placement of a maximum of 3,500 hammocks on the three beaches of the municipality, compared to the 6,315 included in the contract award of the comprehensive beach service, managed by the RA Benidorm company. Therefore, The quantity but also the number of sectors in which this furniture will be placed is reduced, so that there is less occupation, after the complaints that this issue generated last summer, the first of the pandemic.

Municipal sources have explained that this limitation will extend until June 2022, which in turn will also entail a reduction in the exploitation fee that the merchant has to pay annually to the Consistory for the benefits obtained from the exploitation.

The local government of Benidorm has convened this Wednesday a meeting of spokespersons in which this matter has been addressed, as well as other measures included in the proposal to update the services to be provided on the beaches. Among them, the modulation of cleaning, rescue, lifeguard, accessible beaches and coordination of resources, which were cut at the beginning of the year due to mobility restrictions and the lack of users, but which now they will be fully recovered for the high season, when the number of bathers is expected to skyrocket once all the limitations imposed by the coronavirus have been lifted.

In this sense, Toni Pérez stressed that “from minute one of the pandemic we are working on the beaches and in May 2020 we developed a system that we have implemented since June 2020, with the reopening of the beaches to the public, and that obtaining highly satisfactory results, being modular and scalable, adapting at all times to the circumstances and needs of each situation ”.

Also Read  Only 5% of sexual offenders are convicted in Spain

Likewise, the first mayor recalled that “at all times the beaches of Benidorm have maintained the controls and planning, applying the covid measures and protocols”, among them the division of spaces, the control of capacity or the implementation of a schedule that foresees the nocturnal closure of the sandy areas. At the same time, he noted, “Benidorm’s beaches have all the certifications, endorsed with the Blue and Qualitur flags, and specific security, emergency and contingency plans ”.

The motion that will be approved in plenary session foresees that services such as cleaning, first aid or accessible beaches, which were already increased at the beginning of June, will work from now on “one hundred percent” until September 30, when They will review the conditions of the contract again. Regarding the limitations on the number of hammocks, they will be kept at a maximum of 3,500 for one year, until June 30, 2022.

Suspension of the service at the request of the company

The tourist capital of the Costa Blanca, which under normal conditions maintains its sandy areas in full activity during 365 days a year, agreed to the provisional suspension of the hammock service last January at the request of the concessionaire company for the integral management of the beaches, the commercial RA Benidorm, managed by the businessman Ramón Roman, who presented a request to the City Council in which he stated that the worsening situation in tourist markets caused by the health crisis, then immersed in the third wave, it had flowed into a “zero influx of users” to the furniture rental service on the beaches, For this reason, it requested to stop providing the service initially until February 28, 2021 and bill only the services that were actually provided for cleaning and first aid, but adapting them in any case “to the current reality of use of the beaches.”

In addition to allowing the company to temporarily stop placing sunbeds and umbrellas on the beaches on a daily basis, the City Council decided then not pay the fee for the exploitation of hammocks and umbrellas between October 15, 2020 and February 28, 2021, a measure that has also been extended to date.

The proposal that will be approved next Monday foresees to review the conditions next September and readapt the services depending on the circumstances in which the health crisis and tourist demand are at that time.