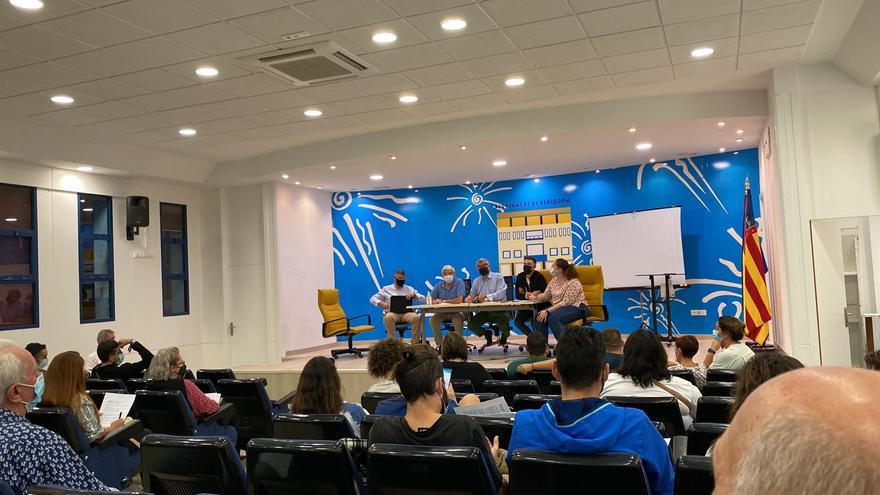 This is the main novelty that representatives of these three institutions have already transferred to the city’s peñistas, to whom this Wednesday, as this newspaper has already advanced, the Consistory confirmed in a meeting that it would not authorize the opening of festive venues as it is incompatible with the health regulations issued to deal with the covid-19 pandemic.

The Councilor for Festivities, Jesús Carrobles, explained that the final program of the Festivities “will comply with all the necessary sanitary measures and the vast majority of the events organized by the Comissió de Festes may be held.” Now, as this newspaper explained days ago, the situation derived from the pandemic, its evolution and the regulations in force of the Generalitat Valenciana, It will force changes in many of the events, both in terms of location and route, and capacity will also be controlled “Following the health regulations for popular celebrations set by the Generalitat” have specified the councilor for Fiestas, Jesús Carrobles, and the president of the Commission, Batiste Rostoll.

The mayor has advanced that “around 80% of the acts will be held” and always “in accordance with the regulations, avoiding crowds, maintaining a safe distance and the use of a mask.”

For this reason, Private security personnel and Local Police will control the adjacent streets and the accesses to some of the neuralgic points, such as the Plaza de la Iglesia, which will not be allowed access to anyone outside the authorities and the revelers themselves who have to participate in the events. Likewise, it will be private personnel who request and control access to the events in the Julio Iglesias, to which no one can enter who does not carry the vaccination certificate.

This is the program

On Saturday, November 13, the aerial bombardment will take place, with controlled access to the area of ​​the Church of San Jaime. In the same way that has been done with the celebration of the Fallas in Valencia, entry will be allowed only to residents in the area and those who participate in the events.

An hour later, at the end of the Band Entry, the Benidorm anthem will be performed in the Julio Iglesias auditorium, whose interior will only be accessible with a Covid certificate.

The staging of the Finding of the Mare de Déu del Sofratge will have a new location and will move to Levante beach, at the height of Bilbao street. What is sought, Carrobles said, is “to have more space and guarantee health security.”

The Offering will also experience modifications in its tour. The rally will take place on Avenida Europa, near the Cimbel hotel, and from there it will run along Avenida del Mediterráneo, Plaza de la Hispanidad, Calle Gambo, Martínez Alejos and Alameda. Access to the Church will be restricted with a special device. In addition, the entities and festive groups participating in the Offering will be summoned at different times to have a staggered departure.

The Councilor for Festivities has indicated in this regard that “all people who wish to participate may participate as long as they wear a mask on the route and keep the safety distance of one and a half meters.”

At one o’clock in the morning a sound, lighting and pyrotechnics show in which the current sanitary measures for outdoor activities will be kept.

The day of Sunday, 14 It will start with an aerial bombardment at 8.30. The mass in honor of the Mare de Déu del Sofratge, at 11.30, will be held in the Plaza de SSMM Los Reyes de España with a maximum capacity of 500 people seated in chairs. Those who follow the standing ceremony will have to do so while maintaining a safe distance.

The mascletá from 2 pm it will take place on Avenida Jaime I and attendees must wear a mask and keep a safety distance. The same conditions will apply for the mascletás on Monday and Tuesday.

As to the procession, its route will also vary and the start time, which will be at 7:00 p.m. The itinerary will run from the Plaza de Sant Jaume, will join Calle Mayor, and will continue through Carmela Martínez, Plaza del Torrejó – a point from which the public can join – Avenida Virgen del Sufragio, Avenida de Alcoy, Calle Valencia, Plaza de Hispanidad, Gambo Street, Martínez Alejos, Plaza de la Cruz and Alameda Street. Access to the church will also be restricted to avoid crowds.

At midnight, the Cuéntame orchestra will perform in the Julio Iglesias auditorium and it will be mandatory to show the Covid certificate to access, as well as for all the events held in this place, which will have a capacity of 3,000 people.

Monday 15 It begins with a new aerial bombardment and, as the previous day, the mass in honor of Saint James, at 11.30, will be celebrated in the Plaza de SSMM Los Reyes de España in the open air until the capacity is reached and with the same conditions than the day before.

The procession will begin at 7:00 p.m. and the route also changes, which will start in the Plaza de Sant Jaume, continue on the Calle Mayor and continue through Carmela Martínez, Plaza del Torrejó, Avenida Virgen del Sufragio, Martínez Alejos, Plaza de la Cruz. and Alameda street. As on Sunday, the incorporation to the procession will have to be done in the Plaza del Torrejó.

At midnight, a musical group will offer a concert in the Julio Iglesias auditorium for which it will be necessary to carry the Covid certificate to access it.

On Tuesday 16, as in previous days, it will begin with the aerial bombardment at 8.30. The Requiem mass will be celebrated at 10.30 am in the Church of San Jaime and Santa Ana, with access restricted to the capacity of the church and with the obligation to remain with a mask.

At 5:00 p.m. the Children’s Show will take place in the Julio Iglesias auditorium and, as during all festivities, access will be through a Covid certificate.

Regarding the Wednesday 17, Last day of celebrations, in the morning the Festa de les Festes will be held in the Plaza del Ayuntamiento. In the afternoon, the Parade of Floats will begin at 7:00 p.m. and its The route will be based on the number of floats that confirm their participation, which will be free for festive entities and groups. Candy toss will not be allowed and the participants must do it with a mask.

Finally, the Fireworks Castle will be launched from Elche Park, as confirmed by the mayor of Fiestas himself. Sanitary security measures will be the same as in outdoor events.

Jesús Carrobles has explained about the festival program that “the usual popular festivals or correfocs will not be held”, which are the acts that are suppressed, but has clarified that “Yes there will be a fair of mechanical attractions and ‘porrat'”. The fair will be located in its usual location in the Fairgrounds and will be officially opened on Friday the 12th by the Queens and Ladies. To access it, you will have to wear a mask and keep a safe distance inside. “Each mechanical attraction will apply the corresponding Covid protocol” has qualified the mayor.

As for the ‘porrat’, it will also be located in its usual place on Emilio Ortuño street and, like the fair, it will start operating on Friday 12 and will be open until Sunday, November 21.

With regard to the supporters’ clubs, the City Council will act in accordance with current regulations applicable to type B party venues (premises with temporary authorization for parties in which they take place, in addition to management and administration functions, activities that involve the meeting or concentration of partygoers, family members and guests and are not open to public attendance). In view of the current situation, the president of the Associació de Penyes Verge del Sofratge, Adrián Romero, has indicated that “with these regulations it is not feasible to request authorization to open the clubs”. Both the Association and the Department “we go hand in hand in complying with current Public Health regulations” has added Jesús Carrobles.