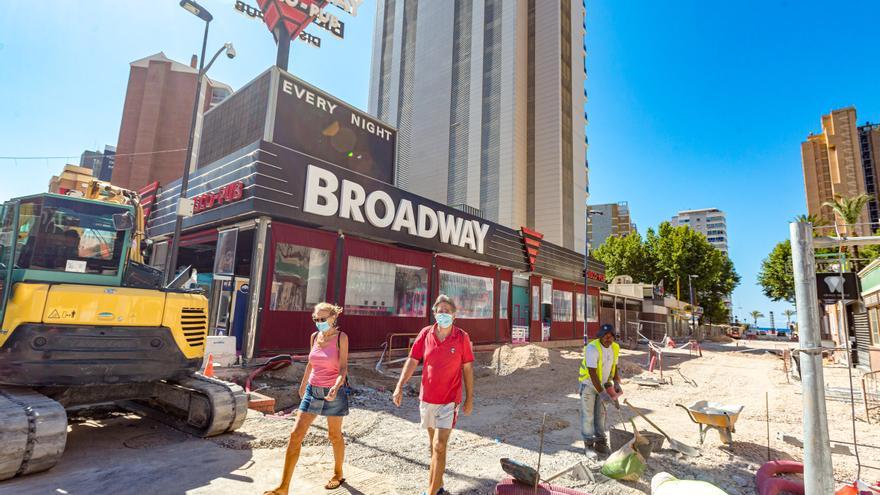 The mayor pointed out that “we do not interrupt any work in progress”, since its completion is urgent and for this a planning of actions is established always looking for the balance, between the public interest in that the works in execution are finished in the foreseen term, and the fulfillment of the objective of achieving optimal services for residents and visitors, and the desired well-being of all. Thus, he justified this measure adopted by the Government Team, attending to the proposals of the technical teams, in which “Benidorm is not yet one hundred percent; and it is better not to paralyze performances for two months now and have the city ready by 2022 ”.

González de Zárate pointed out the response that Spanish tourism is offering to the Benidorm destination and pointed out that with the current perspectives “andhe winter will be better this year and these works in September-October would entail more difficulty ”, trusting in the possibilities of the return of British tourists.

And in this regard, he highlighted the actions carried out in the Rincón de Loix, which will continue as the British market still poses restrictions and praised “the effort of the hotels that are being renovated in that area”, a question for which he pointed out “we have to continue and finish the works.”

In the hotels section, he exemplified with the works of the Hotel Selomar “that it is better to execute them now that there is less incidence in school traffic in the area and access now for heavy vehicles ”. In the actions in the Old Town, González de Zárate pointed out that “we develop the streets in a single platform, burying pipes, and in little more than a week they will be able to finish.

However, “no new works will be started and we will develop those that are underway.” Still, he recalled that “there is an ordinance in force that they are to comply with, so we will study in each case the possible complaints that are presented looking for the best solution “. The objective is, he concluded, “to finish as soon as possible the actions in Ponent, Spanish Armada, roundabouts, crossings, third lane of Europe and Salt de l’Aigua”, connecting with the second part of the operation that includes a planning of road asphalting between June 28 and July 12 ”.

This calendar, said the councilor, “may even be speeded up” but it is scheduled to “develop the improvement of the school grounds of Salt de l’Aigua” with the paving of the roads, “now that there are no schoolchildren” the week from June 28 to July 2, taking place from July 4 to 8 asphalting the third lane of Avenida de Europa “And finish the exit road” next to the Severo Ochoa-Otto de Habsburg roundabout, “· which will be carried out at night to disturb the least”, ending on July 12 the Kennedy and Paris area with Stockholm “which are key works for us ”, therefore, he specified,“ we will gain in mobility and improve traffic throughout the city ”.

Continuity of execution of works

In the Informative Commission of Internal Regime, the decree of continuity of execution of municipal and supra-municipal works in summer 2021. The decree includes the urbanization works UA1 of the Poniente Urban Land, of the PP2 / 1 of Benidorm and of Colombia Street; the lowering of platforms for the dual train of the TRAM d’Alacant network, the works to improve the paving in school areas and other roads, the redevelopment of Avda. Mediterráneo (Phase I), pedestrianization and renovation of Drinking Water Infrastructures and Sanitation in Avda. De Roma and Severo Ochoa. from Zamora street to Toledo street, and from Mallorca, Jaén, Almería and Atocha streets.

It also includes the repair of sidewalks and public roads 2020 together with the contract for the maintenance of the signage in the Municipal District of Benidorm, the improvement of the paving in school areas and other roads, the improvement of road safety and accessibility 2020 as well as actions and works of public service distribution companies (electricity, natural gas, fiber optics, Internet, etc.), works of Municipal Concessionaires, municipal maintenance works in buildings and roads, improvement works in schools and municipal execution orders and emergency works. The works of the Structural Strengthening and Consolidation Project of the Selomar Hotel have been included.