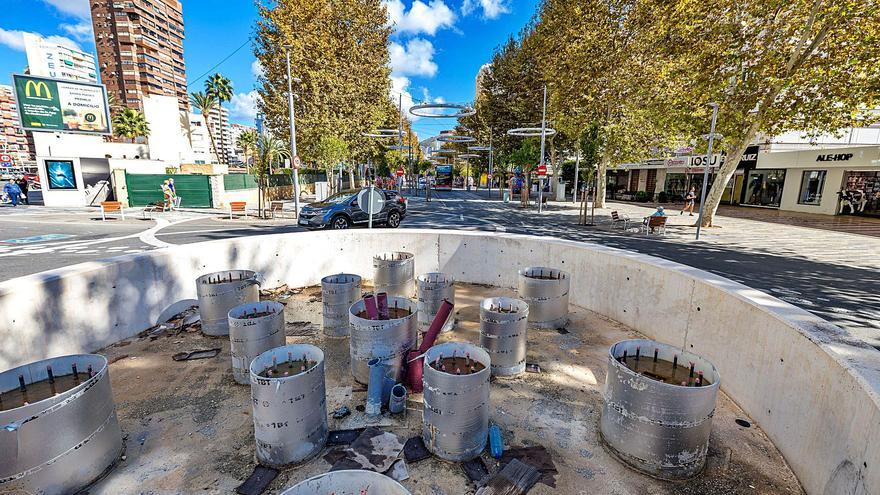 The matter was debated this Monday in the October plenary session within the proposal presented by the local government to grant the company an extension in the execution period of the comprehensive renovation work on Avenida del Mediterráneo. A deadline that is extended until February 28, 2022, more than two years after the start date of the works, November 2018. As this newspaper published, the extension was proposed by the company to be able to “finish” some issues. Among them, the placement of the tecnohito, a singular element 22 meters high; that is to say, a tower as a led screen at the confluence of the avenue, the Triangular square and the Esperanto street. Although it is true that the work of this main road is practically 90% finished and open to the passage for more than a year, although with some work to finish. In fact, the company points out that the confinement and restrictions affected the pace of the works. A circumstance that already caused the calendar to undergo modifications for this year and now it has had to be changed again.

Both PSOE and Cs have voted against the proposal to extend the term that went ahead with the 13 votes of the PP government. In the debate, the Councilor for Works, José Ramón González de Zárate admitted that “there are things that are missing, it is true” and indicated that in the technical reports “these delays are justified”, motivated “by the health crisis, which has caused delays important worldwide in the supply of iron and electrical components, which are the main materials of the tecnohito ». Thus he added that “the delays in both the public lighting and the ornamental fountain” have already been solved “and that” only the techno milestone and some cabling are needed by the telecommunications companies, as has also been corroborated by the optional management of the construction site and the municipal Engineering department ». Regarding the possible sanction to the company for this delay of more than two years, he pointed out that “these are circumstances that can occur, but what we cannot do is punish and damage the companies because it is a problem outside of them,” something that the technicians also allege in their reports.

But the opposition was not convinced by this argument. First, because the execution period for the work on the avenue was 11 months, that is, the end of 2019, before the pandemic. “The work does not have to be extended now due to the pandemic, because it should have been finished before,” said the PSOE spokesman, Rubén Martínez. In addition, he indicated that these works “have had vicissitudes and controversial issues such as the modified contract that was approved” and that the initial budget of 9.5 million euros was increased by 2.1 million more. “They have skipped the execution period by 350%,” he pointed out. It was also suggested that this circumstance and that of not sanctioning the company could “create a precedent.”

The Cs spokesman, Juan Balastegui, explained that “all the errors in the reports are recognized; therefore, it would have to have a sanction “because” it is important to do it with companies that do not comply “. If not, “what message are we offering: I give less time, I have more points and then I’m late and nothing happens.” However, he argued that “the company could have reserved the materials in advance, including the technohito” since it began in 2018. Balastegui went further: “They have very much assumed the extensions, before only the contracts and concessions and now the plays”.

The Councilor for Works defended that residents and tourists “have been enjoying the new avenue for a year, which is being very well received and has led us to be a national and international benchmark.”

In this sense, both opposition parties spoke out: “Luckily the road is open, it would be missing more after merchants and neighbors suffered works in summer and Easter,” Martínez said. “It is a work that has turned out very well and is liked in general,” concluded Balastegui.

Tax on the IBI and vehicle taxes for 2022

The plenary session unanimously approved the modification of the Real Estate Tax (IBI) that will lower the tax rate by 0.12 points, to 0.670. The proposal received an amendment from the PSOE to reduce it from 0.670 to 0.500, but the PP government “knocked down” this motion. The councilor for the Treasury, Aida García Mayor, justified the decision with a contrary report from the Treasury that “does not consider it prudent or recommend” the proposal. The Socialist spokesman, Rubén Martínez, said that the PP rejected his proposal with the “we wanted to lower the receipt by more than 25% and that it represents an average reduction of 100 euros, to finally approve an average reduction of 6 euros.” The plenary session approved the reduction of the Tax on Mechanical Traction Vehicles (IVTM) and “freezing” the rate of tables and chairs for 2022.

Extension of the parks and gardens contract

The plenary session approved this Monday the extension of the maintenance contract for the parks and gardens of Benidorm. According to the Councilor for Public Space, José Ramón González de Zárate, the specifications reflected the possibility of extending the contract annually, to the satisfaction of the parties. “The contract, in addition, is updated with the new green areas that we are going to have,” according to the mayor, who also added that the safety of the company’s workers is “guaranteed” with this extension.