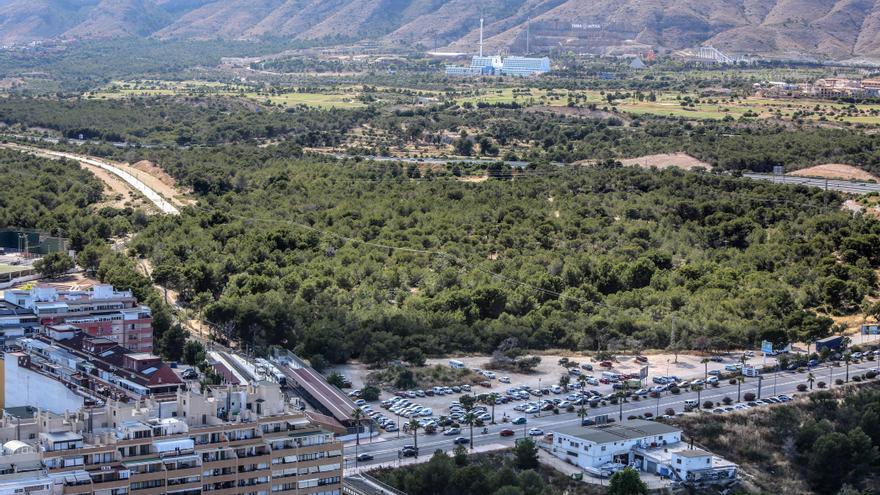 Three million euros more for the expropriation of 332,894 square meters at El Moralet in Benidorm. That is the amount that the City Council will have to pay to the company Incobe SL, owner of the land and owned by the Alicante businessman Enrique Ortiz, after a ruling by the Superior Court of Justice of the Valencian Community (TSJCV) that agrees with the company that appealed the amount of the first expropriation. However, there is still an appeal in the Supreme Court.

The car, to which this newspaper has had access, andpartially upholds the contentious-administrative appeal filed by the company against the resolution of July 23, 2018 of the Alicante Provincial Expropriation Jury in which another appeal for reconsideration against an order of April of that year was dismissed. The Valencian court has set in its sentence a new value to the surface that was already expropriated in El Moralet and It raises it to 8,611,221.91 euros to which it adds 5% of the value of the condition, which amounts to 9,041,783.01 euros.

It should be remembered that the Benidorm City Council has already paid 5.9 million euros for this expropriation of more than 300,000 meters of land, for which now, according to the ruling, it will have to pay about 3 million euros more for that same operation to the company in which Ortiz participates.

However, municipal sources explained that the Possibility of filing an appeal for Cassation before the Supreme Court. To do this, “an external report has been requested” to weigh this possibility and see the consequences it could have.

The history of the expropriation of El Moralet goes back a long way. In 2011, Incobe asked to start the procedures to force the City Council to acquire this plot of 332,000 meters of undeveloped land as it has not been developed. At that time, heThe company claimed 47 million euros, but the council (governed at that time by PSOE and CdL) assessed the land at 73,000, which started a legal battle, which culminated in an expropriation price established by the Superior Court of Justice of the Community (TSJCV) of 5.9 million, an amount that was later ratified by the Supreme Court.

In November 2017, the PP government tobonó the main stud, but not the default interest generated since the file was opened in 2012. Those interests were valued at that time at 1.08 million. But a new setback happened: a bureaucratic error in the Intervention area caused them to pay 40 euros less than what had been stipulated, and that file had to be restarted. The consequences of this could be a new administrative dispute on the part of the company, something that has happened and that has finally changed the final price of the expropriation from 5.9 million to 9 million euros.