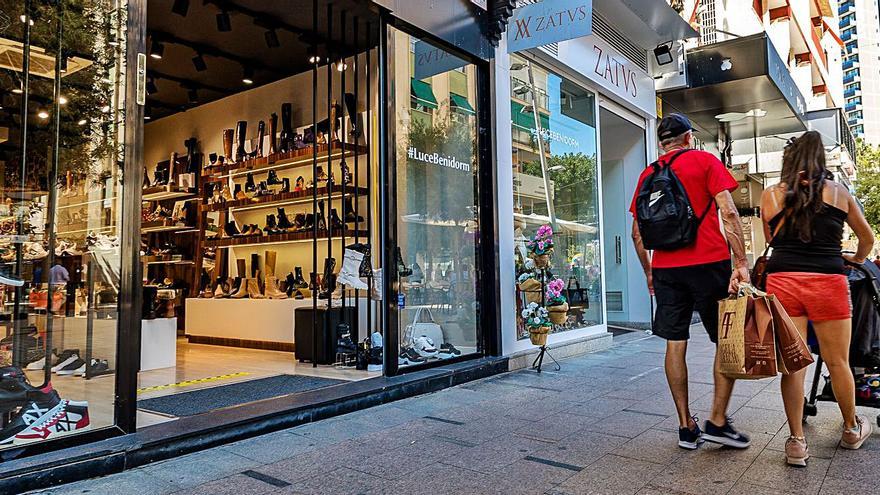 The most commercial streets of Benidorm have recovered some businesses that closed due to the pandemic. DAVID REVENGA

The health crisis caused businesses in the tourist capital to draw the blind and face a difficult situation. The lack of tourism and the reduction in the purchasing power of families have kept shoppers away from the stores, who, once the restrictions have ended, are back to local commerce.

The most commercial streets of Benidorm have recovered some businesses that closed due to the pandemic. David Revenga

“The sector has not recovered yet. Not because there are no people right now, but because the shopping trend has changed ”, explains the president of the Benidorm Merchants Association (Aico), Raúl Parra. The pandemic triggered sales “online” that “now is going down little by little.” Thus, at this time, “those who have had the worst time are the textile businesses” that works a lot with tourists.

All of this is reflected in sales that are still below the figures they reached in 2019. On average, the commercial sector is 10% below the data of two years ago. But the situation is different depending on the type of product: “there are some stores that are 40-50% less,” said Parra. And, among the most affected, textiles and the home. And to all this there is another issue: the rise in electricity or gasoline that makes “purchasing power lower and less is spent in commerce.”

In the pandemic, many were forced to close their businesses. The trade association indicates that “about 200 will have left the activity definitively” since March 2020. And, according to municipal data, 183 establishments have requested opening licenses from that moment until October 1. And there are those that closed for a few months but have reopened. “Now 95% of the businesses are open” without counting those in the English area, in the Rincón de Loix, said Parra. Because still many have not been able to open their doors again due to the lack of a full recovery in British tourism.

The recovery has begun, according to sources in the sector, but not as fast as that of the hospitality industry: “trade is not going at the same speed. Bars or cafes is a more direct consumption. As soon as there has been a movement of tourists, it has recovered ». And the head of the entity points out that “the trend is for Benidorm to close shops and change them to hospitality.” In fact, he predicts that “out of 1,500 shops, about 100 will disappear” for this reason. “Shops have to reinvent themselves in some way,” added Parra. And that happens through modernization: “we are working on projects for online stores or others.”

However, in the last year, the aids have followed one another on the part of the administrations. Three direct commercial campaigns have been organized by the City Council: “Benidorm Waits for You”, with an amount of 1.4 million euros; the Christmas window dressing contest, with 700,000 euros; and the current one of «LuceBenidorm», with 1.4 million. “From the local administration we have supported the sector with these campaigns,” said the Councilor for Commerce, Lorenzo Martínez, who added that “now we are working hand in hand for more specific campaigns to give more visibility” and that they could arrive at Christmas. This is precisely what the sector demands: a direct initiative in the street that allows attracting buyers taking advantage of the Major Patron Festivities and the Christmas period. “The aid is very positive, but we need campaigns to boost sales,” he concluded.