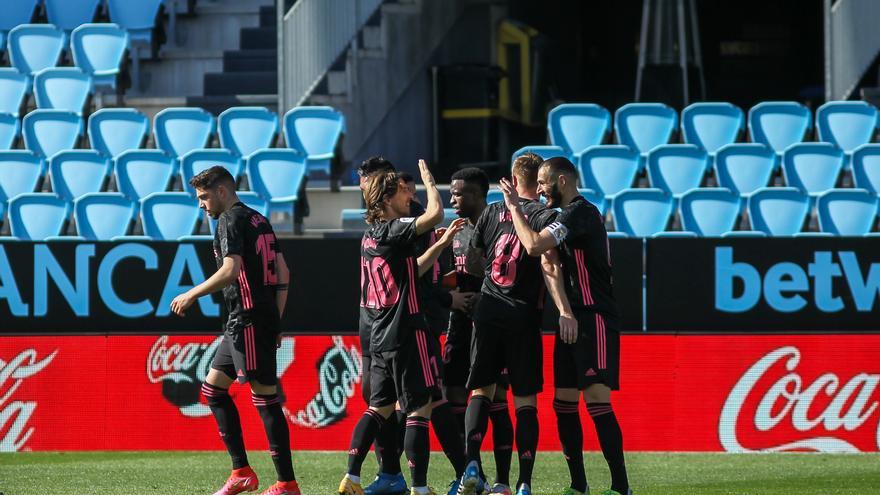 Two goals from Karim Benzema in which he took refuge throughout the second part, they led to the triumph of Real Madrid in Balaídos to prolong the persecution of the leadership of Atlético Madrid.

The white set showed both faces, which keep faith in your league options. A brilliant first half, where he cemented the victory and another gray, clinging to the scoreboard and his advantage to pocket the three points and close the gap. Zinedine Zidane’s team completed their fantastic week. To qualify for the Champions League quarter-finals he added valuable loot in Vigo, fertile ground for his interests.

Real Madrid found a good staging in Balaídos, a friendly scene in recent years, where he usually scores, with a return to the traditional system. To the taste of Zinedine Zidane. The French coach left aside the three centrals with whom he managed the last games. He recovered Casemiro, with whom he did not have on Wednesday, and opted for the Uruguayan Fede Valverde as a companion to Karim Benzema and Vinicius.

The white team burst in active and ambitious. Effortless in the pressure, encouraged by the European qualification and eager in the attempt not to fall from the race for the lead. Real Madrid stalked the rival area although without disturbing Iván Villar. Celta had not yet entered the game. Between Toni Kroos and Benzema they manufactured the white goals of the first half. The first in the 20th minute when the German found the French among the centrals. Benzema did not forgive who beat the goal from Vigo.

The second came ten later as a result of pressure. Kroos stole the ball at the edge of Celta’s area and found the French striker again, who also did not miss. Maximum efficiency at Real Madrid. Far from falling into discouragement, Celta awakened. He advanced his lines. Denis Suárez made contact with the ball and the Peruvian Renato Tapia, who noticed discomfort, multiplied in the center of the field.

This helped Eduardo Coudet’s team to connect again to the party. Five into the interval a Kroos foul, apparently inconsequential, meant a set piece that Denis executed towards Santi Mina, who headed out of reach of Thiboaut Courtois. The Galician striker revealed the white rear.

The party was reborn. Celta accelerated, grew in intensity while Real Madrid lost control and authority in the game. Courtois avoided the tie at game time with a shot by Iago Aspas that thwarted the Belgian. A declaration of intent.

Real Madrid stuck to its gray, cautious and conservative version. With spaces, he was only under the protection of Vinicius, who accelerated on several occasions but who was just as imprecise as always in the definition. Benzema wasted an error by Iván Villar in starting the ball. He was able to sentence there.

Iago Aspas, who has not yet scored so far in 2021, could tie eight minutes from the end on a half-moon free-kick. His shot hit a stick with Courtois beaten. In the middle of Vigo harassment, Real Madrid closed the game with a new goal, in the last action, when Marco Asensio finished off a counterattack from Benzema, the man of the match.

Incidents: Match of the twenty-eighth day of LaLiga Santander played at the Balaídos stadium.