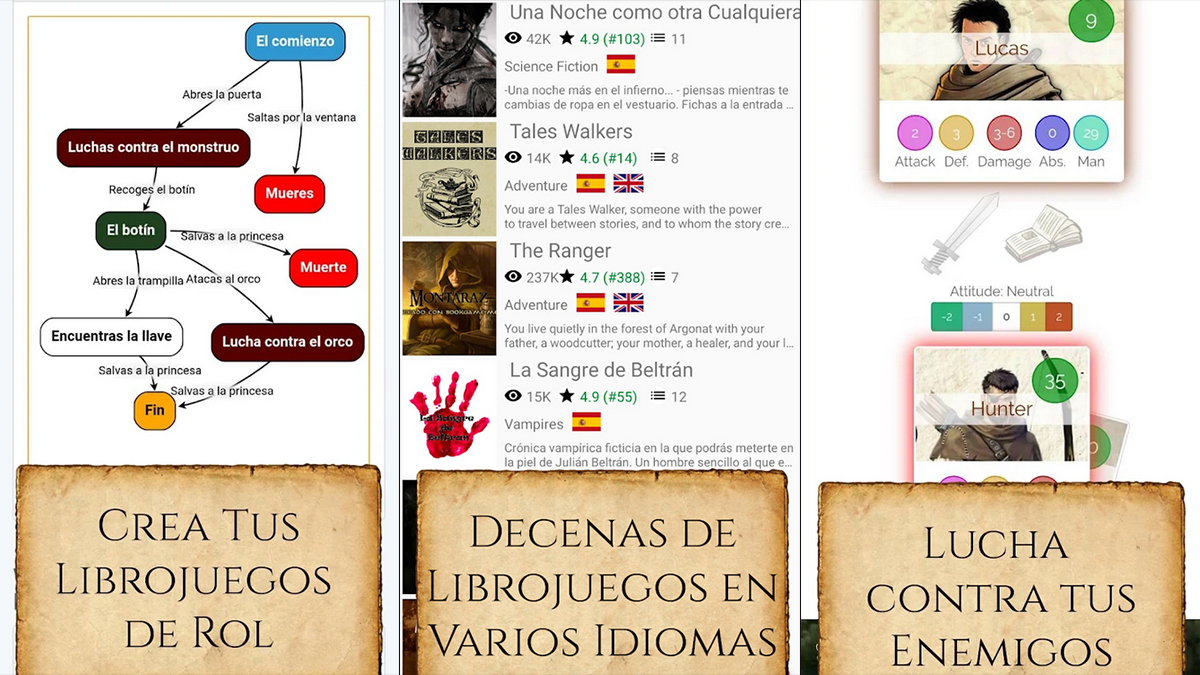 The Aragonese computer programmer Lucas Muley (35 years old) discovered a few years ago Amber’s fate (Ecnaris Games), an interactive digital novel ―in the style of the popular collection Choose your own adventure-, where the reader is making decisions that influence the plot. In a few hours he devoured history, set precisely in the discovery of a cure for a strange epidemic. “I enjoyed it a lot, but it fell short and I thought it was a shame that perhaps due to not having adequate support, many potential interactive novels remained undeveloped,” says Muley by phone. That reading was the germ to create Book Game, a platform that offers the technological structure so that anyone can write their own interactive fiction, and share it with other users. After four years, Book Game has more than 300 written stories and a community of more than 100,000 users.

Both the paper version (called the gamebook) and the interactive fiction (in digital format) are experiencing a resurgence in recent years, showing great potential to reach not only children and adolescents, but also adults, as explained by Jacobo Feijoo, co-founder of the Spanish Association of Gamebooks and Interactive Fiction (Dédalo).

Feijoo, an expert in gamification and transmedia narratives, recalls that the collection Choose your own adventure ―Created in the late 1970s on paper― continues to be one of the best-selling literature for young people (after myths like Harry Potter or Nightmares). “Meanwhile, interactive fiction has had another chronology, but it has managed to pick up the glove of this format very well, which combines reading and playing,” he adds.

“The most advanced in age will remember the conversational adventures and later the graphic adventures that were played on the computer back in the eighties and nineties,” says Feijoó. The Spanish company Aventuras AD was one of the greatest creators of this technological product, which ended up being relegated from the market by video games. In Spain, it was not until a decade ago that he recovered again. “Publishers such as Dark Game, Suseya, Saco de Huesos, or Pluma y Píxel have dedicated efforts to revive this digital format, which continues to have a large audience willing to immerse themselves in these adventures again,” he explains.

It has not only been an initiative of the publishers. Freelance authors who have used mobile applications to write their own interactive fiction have also grown. This is the case of Bruno Piqué, a 34-year-old Argentine living in Madrid, who turned the Spanish capital into an apocalyptic scene dominated by zombies. Madrid Zombie, As this digital literary saga that began its journey in 2017 is called, it allows the user to walk the streets of the city or visit emblematic places such as the Prado Museum while fleeing from the undead and making decisions to avoid being eaten. As Piqué himself explains, the idea arose from the desire to develop his facets as a writer and computer programmer. That first installment would be followed by a second one, Madrid Zombie 2, and another Madrid horror story, Trapped in the Retreat. The three interactive fictions have exceeded 200,000 downloads on the Play Store, Google’s application store.

Lucas Muley has also turned to mobile applications. Your application Gamebook Store collects digital fictions written by users of the platform web for example, Any nightby Baldren, which accumulates 50,000 completed readings. “This format can be a gateway to reading for many people, especially if you like fantasy and role-playing games. In this case, there is 95% reading and 5% playing, contrary to what happens with video games ”, explains Muley.

According to the last report on reading habits, prepared by the Federation of Publishers Guilds of Spain, the percentage of non-readers stands at 36%, while occasional readers – those who read once a month or once a quarter – represent 11.3%.

Interactive fiction is also a teaching tool, as Jacobo Feijóo explains. “For children and adolescents, so hungry for digital formats,” he adds. The co-founder of Dédalo highlights the collections of the Huelva publishing house Octopus Red that provides a wide catalog of digital books for schools. “Stories that address the current social issues on bullying, diversity, environmental awareness …”, he adds.

Feijóo has recently published a manual on transmedia narratives and has adapted this format to professional training for adults that has already been used by large companies such as BBVA. “Following the same pattern of choice, the student ends up demonstrating a series of abilities that result in a specific professional profile,” explains Feijoo. “It seemed that it had disappeared, but interactive fiction was still latent and with a little oxygen it has once again demonstrated the tremendous potential it has,” he concludes.