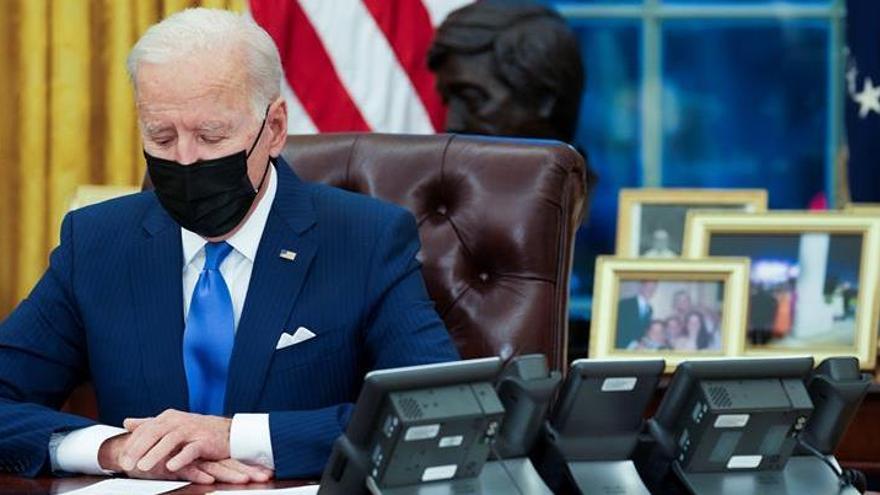 The president of USA, Joe Biden, advanced this Tuesday in his intention to dismantle the legacy of his predecessor, Donald Trump, by announcing a set of orders directed at reunite separated families, restore the asylum system and address with its regional partners the causes of immigration.

Biden signed the measures hours after the Senate confirmed Cuban-American Alejandro Mayorkas as the First Hispanic and Immigrant to Assume the Office of Secretary of Homeland Security from the country.

“I am not making a new law, I am eliminating bad policies,” he said. Biden during a brief act in the Oval Office, in which he took the opportunity to congratulate Mayorkas on his confirmation in office and put him at the forefront of his Government’s effort to obtain approval in Congress of his ambitious immigration law.

Biden indicated that with these orders he seeks to “strengthen the immigration system” based on the executive actions he announced on his first day in the White House.

On his first day, the Democratic leader suspended the construction of the border wall with Mexico, lifted the veto on the arrival of migrants from countries with a Muslim majority and shielded the DACA program, which protects 650,000 undocumented young people brought by their parents to the country from deportation. country, known as “dreamers.”

The president assured that he is addressing many of the executive orders promulgated by his predecessor and that he considered were “counterproductive” for security and immigration.

In the first place, the ruler signed an order that creates a working group whose objective will be reunify minors who were separated from their parents after crossing the border under the Trump administration.

“We will work to undo the moral and national shame of the previous Administration that literally, not figuratively, ripped children from their families, mothers and fathers at the border, with no plan, none at all, to reunify children still in custody and their parents, “Biden stressed

The group will work with representatives of affected families and allies in the countries of the continent to find the parents of the minors who are still in government custody.

The separation of thousands of immigrant families who crossed the border with Mexico without documents was one of the most controversial decisions of the Trump Administration, which used the so-called “zero tolerance” policy announced in April 2018, although This practice started as a pilot program in July 2017.

A June 2018 ruling halted the application of that policy and it was subsequently estimated that around “2,551 separated children were covered by the court order.”

A group of attorneys appointed by a federal court for reunifications admitted that could not locate the parents of 545 children separated from their families between 2017 and 2018.

Another decision addresses the causes of migration and for this a regional framework is created. The initiative proposes working with civil society, international organizations and the Governments of North and Central America, especially El Salvador, Guatemala and Honduras, to address migration.

The strategy also aims to strengthen asylum systems and resettlement capacity in Central American countries, as well as restore and strengthen the asylum system in the United States.

In addition, it orders the Department of Homeland Security (DHS) to review the Migrant Protection Protocols (MPP) program, also known as “Remain in Mexico”, by which more than 60,000 asylum seekers were returned to that country to wait for your process.

Biden had already ordered suspension of new enrollments in that program.

Finally, the third executive order seeks check “top to bottom” all recent measures approved by the Trump administration that have “established barriers “to the immigration legal system, especially the rule known as “public charge”, designed to penalize immigrants for the use of public benefits.

According to Biden, this order “restores faith in the immigration system” and strengthens the inclusion of new Americans.

An immigrant, the right hand

To implement his immigration strategy, Biden will count on Mayorkas, a former prosecutor and former official who is experienced in immigration matters, in charge of the Department of Homeland Security (DHS), the agency in charge of protecting the country, safeguarding borders and enforcing the laws. migratory.

Mayorkas, 61, who came to the country in 1960, will effectively be Biden’s executing hand.

“I look forward to his leadership and work with Congress on many issues, including the immigration bill, which I believe has great support in both houses,” said the president, referring to the new official.

The nomination of Mayorkas, who served as DHS undersecretary between 2013 and 2016 and was also director of US Citizenship and Immigration Services, received the nod from the Upper House with a 56-43 vote.

Unlike his cabinet colleagues, who achieved greater support in the Senate, Mayorkas’s closed vote seemed like a long-term advance that he will have to take to carry out Biden’s promise to turn the United States into a country again. of immigrants.

After knowing the announcements, the vice president of defense of the bipartisan organization FWD.us, Alida García, thanked that the Biden Administration continues to “take measures to reverse the devastating policies of the previous Administration on the southern border that led to the separation of thousands of families and blocked tens of thousands of people fleeing violence and persecution “of the right to asylum.

For her part, Shelby Gonzales, director of immigration policy at the Center on Budget and Policy Priorities, stressed that these actions “represent an important step to ensure that the United States once again welcomes people who want to build a life in this country.” .