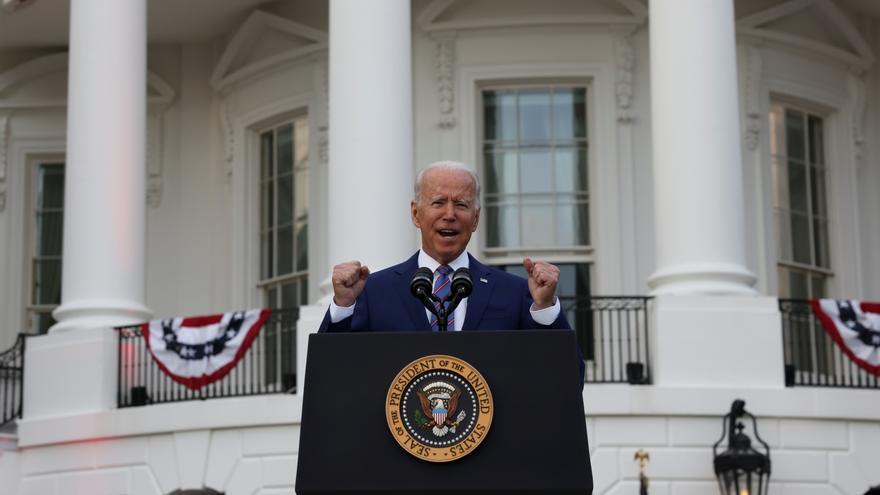 USA turned his celebration of Independence Day on a date for the reunion after months of restrictions due to the coronavirus pandemic, which has claimed more than 600,000 lives.

Americans, for weeks now without the obligation to carry face mask In case they have been fully vaccinated, except in some closed spaces, they were launched into parks and public places, while the numbers of travelers almost returned to the levels of 2019.

The Administration of the Democrat has considered this date a propitious occasion for the reunion in family and the “Day of the Independence and the independence of the covid-19”.

“We see each other again. Businesses are opening and hiring again.”highlighted the president who organized his first massive activity at the White House on July 4.

The south garden of the presidential residence welcomed some 1,000 people, mostly essential workers, the military and their families, to enjoy a barbecue, one of the most ingrained customs among Americans to celebrate their Independence.

The activity, which included a concert, took place while in the surroundings of the White House thousands of people waited for the fireworks show that traditionally closes this day. “We are emerging from the darkness of a year of pandemic and isolation,” added Biden, who recalled that 2020 was “a year of pain, fear and heartbreaking loss.

But amid the festive mood, Biden warned that the battle against COVID-19 is not over.

“We have a lot of work to do”, considered the US leader, who insisted that the virus “has not been defeated.”

He recalled that “powerful” variants such as the delta, initially detected in India, have emerged, so invited Americans to get immunized, stating that “the best defense against these variants is to get vaccinated”

Just this Sunday, the main epidemiologist of the Government, Anthony Fauci, He called on the population to leave the “differences” and get vaccinated to avoid “preventable” deaths.

Speaking to NBC News, Fauci regretted that about 99.2% of the people who died in recent weeks from the virus were not vaccinated.

The goal of 70% of vaccinated is not reached

Biden had proposed as a goal that by this date 70% of adults had at least one dose of the vaccine, but admitted weeks ago that it would not be achieved, due in large part to the low levels of inoculation among the youngest.

Only 20 of the country’s 50 states and the District of Columbia – where the city of Washington is – achieved the president’s goal, according to figures from The New York Times.

According to the Centers for Disease Control and Prevention (CDC), 67.1% of the population over 18 years of age (about 173.1 million) have received at least one injection, while 58.2% are already fully immunized.

“If you haven’t been vaccinated, do it now”

In the case of the general population, 54.9% (182.4 million) have received a dose and 47.4% have already completed their vaccination. “If you have not been vaccinated, do it now,” the president asked his compatriots, and noted: “we do not want to go back to where we were a year ago.”

“Today, although the virus has not been defeated, we know: no longer controls our lives, no longer paralyzes our nation and it is in our power to ensure that it never does again, “stressed Biden.

This day, he called on his compatriots to remember who they are. “We are the United States and there is nothing we cannot do if we do it together,” he said, closing his speech with a “happy 4th of July.”