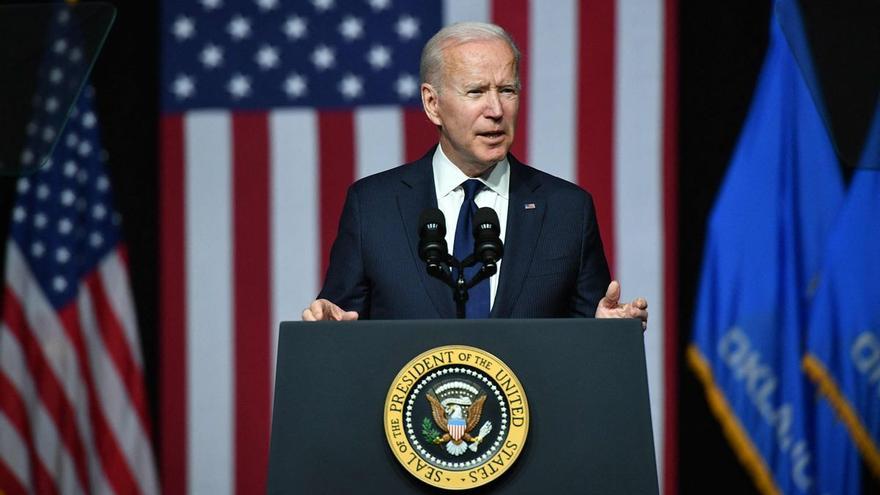 For decades the racial massacre perpetrated between May 31 and June 1, 1921 in the Greenwood’s black neighborhood in Tulsa (Oklahoma) had no space in textbooks or history books or in many official US documents. Omission and concealment did not eliminate that dramatic episode, in which a violent mob of white supremacists assisted by the authorities, murdered at least 100 to 300 black men, women and children and looted, bombed and reduced to ashes a thriving community that became known as the Wall Street negro.

This year, on the centenary of that act of terror, and at a time when the awareness of racial injustice In the United States, it has been in the political and social foreground for a year after the murder of George Floyd, the country and its current president, Joe Biden, face Tulsa, its tragedy and the wounds left that have not yet healed. Also to common problems that today100 years later, they continue to whip the black community from all over the US.

This Tuesday, the same day that excavations were restarted looking for mass graves, Biden has starred in a historic visit to the city, the first of a president to commemorate the tragedy. The president has visited the Greenwood Cultural Center, has met privately with three survivors aged 107, 106 and 101 and has paid tribute to the victims.

Biden has spared no words to denounce the events of a century ago, to also denounce that they have been silenced, to theshine light and report the actions of that violent mob of white supremacists, that you have defined as “an act of hatred and domestic terrorism” and it has connected to racist actions of the present, from the Charlottesville rally to the assault on the Capitol. Already the day before, in a national declaration of a remembrance day, he urged “the American people to reflect on the deep roots of racial terror“In the US and this Tuesday he recalled that” the US cannot be rebuilt better without dealing with the systemic racism and the disparities that have plagued our nation for too long. ”

“The darkness can hide a lot but it does not erase anything,” he said. “Some injustices are so heinous, so horrible, so painful that they cannot be buried. Only with the truth may come the healing, the Justice and the repair. (…) Must find the courage to change the things we know we can change“he said in Tulsa.

What Biden has done is take advantage of this symbolic journey to emphasize the commitment of his presidency with making central in his agenda the fight for justice and racial equality, not just in Tulsa. And in his speech he announced specific steps that your Administration is giving or wants to give to try to help reduce the gap, a abyss actually what’s next separating black from white communities in all the country.

According to a recent Human Rights Watch report, for example, blacks in North Tulsa suffer 34% of the poverty compared to 13% of the white population in the south of the city. His unemployment doubles that of whites while median income stays in half and their Life expectancy (70 years) is 11 less than that of whites. At the national level, according to data from the Center for Progress, mean wealth of whites in the US in 2019 It was from $ 189,100, while that of blacks stayed in $ 24,100.

The central focuses of the initiatives presented by Biden are on making it easier for minorities to increase their ownership on two issues that the Administration considers “two key creators of wealth”: housing and small businesses. He has urged the Department of Housing and Urban Development, for example, to publish two new rules that should align federal practices with the Fair Housing Act by now “rethink established practices that help perpetuate inequalities”, Including ending with unfair appraisals O discrimination.

Biden has also promised to raise the percentage of federal contracts that are signed with “disadvantaged” businesses (which are currently 10% of those sealed by the government). According to the Administration, this will translate into $ 100 billion that will go to these businesses in the next five years.

Other proposed steps are elements that are included in his mammoth $ 1.7 trillion infrastructure plan. And although this proposal must be negotiated with the Republicans, which by no means guarantees the survival of games, there are, for example, the project to allocate 10 billion dollars to a revitalization fund that would support civil projects of infrastructures in minority communities and another endowment of 15,000 million to finance or give advice to projects of transport to remove barriers to connectivity that now negatively affect those communities.

A new tax incentive that attracts private investment to the construction or rehabilitation of housing for low and middle income people o allocate $ 31 billion to small business programs that make it easier for minority entrepreneurs and entrepreneurs to now unequal access to capital.

Biden, whose electoral victory was fundamentally supported by the black community, has also dedicated part of his speech to vindicate and defend the necessary protection of voting rights, which are under assault in many Republican states with initiatives that punish mostly the votes of poor and minorities. What has been absent from your ads, drawing criticism from groups such as the National Association for the Advancement of Colored People (NAACP), is an announcement about the potential cancellation of student debt, a critical problem in the US that disproportionately weighs down the black population.

The national approach to tackling the fight against systemic racism It is essential, but doing it from Tulsa and on such an important date as this centennial has redoubled its meaning. So has the fact that Biden’s trip came almost a year after he offered a controversial (and frustrated) rally in the same city by his predecessor at the White House, Donald Trump, a president who more than “dog whistle” (the a term used in the United States for veiled racist messages) threw bile and stirred up racial hatred with the megaphone of the presidency.

Biden has also met privately with Lessie Benningfield Randle, Viola Fletcher and Hughes Van Ellis, who were girls and babies in Tulsa when the terror destroyed Greenwood a century ago. The three testified two weeks ago in Congress, before a Congressional committee studying the unresolved question of reparations (a subject subject to deep debate on which Biden has not spoken on Tuesday and in which, for now, only has said to be “open to study”). “Our country can forget this history, but I cannot, and I will not. Neither did other survivors. Not our descendants, “Fletcher said then, while Randle snapped at the congressmen:” It seems that justice in America is always slow, or not possible, for black people. And it makes us feel like we’re crazy just asking that errors are corrected”.