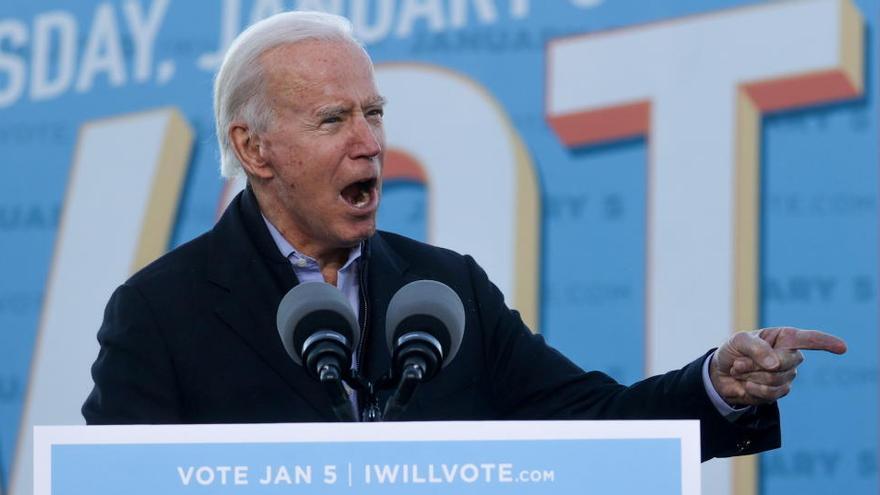 The American state of Georgia celebrate this Tuesday the second round of the country’s Senate elections, a vital choice for the president-elect, Joe Biden, because if the Democrats win both seats at stake it will have the majority of the Upper House, which will allow you to implement your presidential agenda more easily.

The southern state has already held an electoral process to elect your two senators in the November 3 elections, where, in addition to electing a president, voters chose 34 members of the Senate.

Republican Senators David Perdue and Kelly Loeffler are defending their seats, as in November, to the same Democratic hopefuls: documentary filmmaker and ex-congressman Jon Scoff and Reverend Raphael Warnock. Neither managed to exceed the threshold of 50 percent of the vote on November 3.

If the Democrats win both seats, they would tie 50 senators with the Republicans so the casting vote that allows breaking ties for the future president of the Senate, Kamala Harris, it would give the Democrats effective control of the Senate, as they already do with the House of Representatives.

Both Biden and the still president of the United States, Donald Trump, have called rallies this Monday in Georgia to give a last push to their respective candidates.

In the case of Trump, the trip to the city of Dalton – in the northwest, a key location for Republican participation – is especially important to stoke the Republican vote and that the electoral base of the party go to the polls, after repeated assertions about an alleged “fraud” committed in the November elections in the state, which could hold back voters.

Losing control of the US upper house would be a major blow to Republicans, who have tried to make the second round a kind of plebiscite on Trump’s legacy and his ability to put a stop to the future Biden Administration.

Loeffler and Perdue have entrusted their future to the New York tycoon, despite the fact that Trump has questioned the fate of the economic stimulus package due to the pandemic that both have supported and has constantly questioned the legitimacy of the elections in the southern state, which has also been a reason for division among the republican ranks.

In fact, the last time the president visited Georgia to support his candidates he invested much of the time in denouncing the “theft” of the presidential elections, which has led him to initiate a legal battle to try to derail Biden’s victory.

For their part, Biden and Harris have each already made a trip to Georgia, while the former president Barack Obama held a virtual rally in favor of Scoff and Warnock. Democrats, arriving at Election Day after a smooth campaign, think Trump’s rhetoric will ultimately help his candidates.

Various polls collected by ‘The Hill’ show a tight race between Perdue and Scoff and Loeffler and Warnock, who have worked hard to point out what the second round of elections means to increase participation.

Georgia, a traditionally conservative state, became a ‘key’ territory for the results of the November 3 elections. Trump lost it by less than 13,000 votes, being the first time that the voters of the state opted for a Democratic candidate in almost 30 years.

On the eve of the elections, the eye is on the southern state also by Trump’s call to Georgia Secretary of State Brad Raffensperger, which was made public on Sunday. In it, the president would have pressured the senior official to “find” enough votes to turn the electoral result around.

“It is not possible that Georgia lost. It is not possible. We won by hundreds of thousands of votes,” Trump says in the recording. “People in Georgia are angry. People in the countryside are angry and there is nothing wrong with saying, how to say … you have recalculated,” he adds. “Good, Mr. President. The resource you have, the data you have, are wrong,” Raffensperger responds.

In addition, almost 90,000 voters who did not participate in the November elections have already cast their votes for this second round, according to the data analysis consultancy TargetSmart, of Democratic affiliation, collects ‘The Hill’. Also, about 75,000 people registered to vote in the weeks after Biden won Georgia.

Early voting usually benefits Democrats, since it is a more used option among minorities and their political base, while Republicans prefer to vote in person on Election Day due, among other reasons, to Trump’s campaigns against voting by mail.

The election result is expected to be delayed by several days or even weeks, as reported by the Bloomberg news agency, which has already happened with the recount of the November 3 elections in Georgia.

The US press did not project Biden’s victory in Georgia until ten days after the elections. In addition, the state electoral authorities took another week to certify the results, and they re-certify them two more times, the last on December 7.

Thus, and with the anticipation that this second round will be close, partisan control of the Senate will be up in the air probably until February. “There is almost no chance of it being known on election night,” summarized Kennesaw University political scientist Kerwin Swint.

A senior official who has preferred to remain anonymous told Bloomberg that Georgia authorities expect the counties that make up the state to have counted the votes cast in advance Before Election Day so that only the votes cast have to be counted. Before 7:00 p.m. (local time), the time at which the polling stations close.