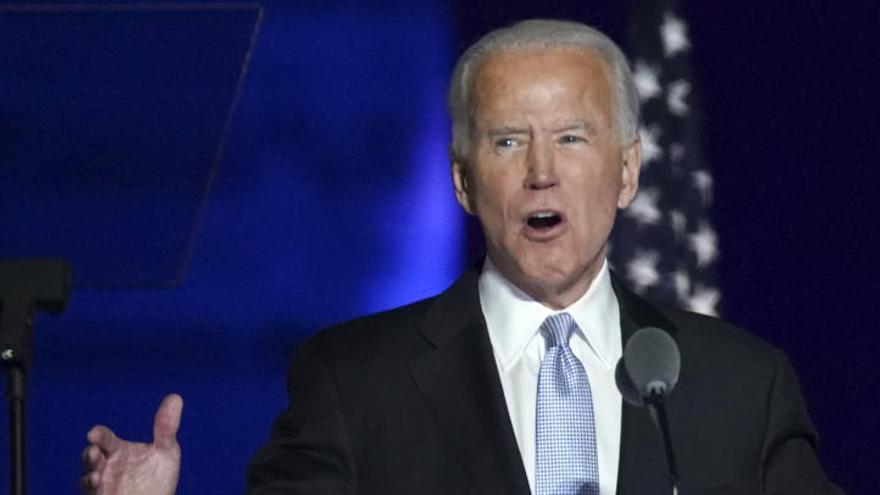 It is unusual for the winner of an election in the United States to address the nation before the loser admits defeat. But these are not normal times either. Hours after his victory over Donald Trump, which arrives five days after the elections, Joe Biden vowed to leave demonization behind that has marked the policy of recent years to unite the country and restore hope for the future. “This is a time to heal wounds“said the new president-elect from his adoptive state of Delaware. Hundreds of thousands of people were celebrating the change of cycle in the streets of the country at that time, an explosion of joy that has served to dissipate, even momentarily, the tension of the last times.

There were no grievances or reckoning in Biden’s speech, which at 77 he embodies peace and the search for consensus that much of the country yearns for after the scorched earth policy of Trumpist populism. The democrat he reached out to his political rivals, who have not lost hope of litigating the outcome of these elections in court. “For all of you who voted for President Trump, I understand that you are disappointed,” he told them. “But let’s give ourselves a chance now. Time to leave harsh rhetoric behind, to lower the temperature, to see each other and listen to each other again. “It will not be easy. The Republican continues to claim that the elections have been stolen from him, contrary to what the independent observers or the local authorities at the forefront of his administration maintain.

Trump has neither conceded his defeat nor toned down his rhetoric. His followers fist each other yesterday in front of the Michigan and California parliaments, a sign of the wounds left by a president who has not known or lost with dignity. “Let this grim era of demonization in America begin to end here and now“His successor exclaimed last night. Biden adds 279 electoral votes, seven more than necessary to conquer the White House, after Nevada and his home state of Pennsylvania leaned in his favor to end the agonizing uncertainty of the recount.

This ending completes one of the most epic political comebacks in recent times, only comparable to that of Bill Clinton in 1992. That of a man forged in the corridors of the establishment in the capital, who has managed to transform his personal tragedies into a bottomless well of empathy towards the adversity of others.

Biden embraces the most virtuous version of the American character. He only had to promise a return to normalcy to give credibility to his candidacy. “You have chosen hope and unity, decency and science and yes, also the truth. You have marked the beginning of a new day in America, “he said. Kamala Harris last night before giving way. The former attorney general of California is one of the emblems of the new generation of the party, politically moderate like him, but revolutionary because of the accumulation of identities it carries. She will be the first woman to reach the vice presidency, the first African American, the first daughter of immigrants and the first of Asian descent.

Both face a terrifying context, with an uncontrolled pandemic, the worst recession in the last 90 years and a host of racial and socioeconomic grievances that have turned the world’s richest country into a powder keg not unlike the failed states. Without this pandemic, it is highly questionable whether Trump would have lost reelection.

And even if Biden gave himself a “mandate for action” on the eve of Covid, the economy, climate change or systemic racism, Democrats have fallen far short of their best expectations. In these elections they have eaten the main dish on the menu, but they will come out without desserts or wine. While they will retain control of the House of Representatives, their lead has waned. Y in the Senate they can only aspire to a tie to 50 seats, which would give the vice president the right to break it.

To get there they will have to win the two pending seats in a second round to be held in early January. Even if they succeed, it will be difficult for them to legislate as they please because several of their senators are very conservative. They have also failed to seize any of the Republican-controlled state parliaments, which rule most of the nation’s states.

Biden is an old Capitol fox, where he spent 36 years before becoming vice president of Barack Obama in 2008. His career has been marked by the search for consensus, something that he achieved by generally tilting towards conservative positions, but the Republican Party is not the one of yesteryear. The blockade and fanaticism are his motto and it is highly questionable that his elected officials will move away from the great leader in the short term, a Trump who has not lost votes in these elections and maintains a blind devotion among the Republican bases.

To further complicate Biden’s mission, he launched his campaign by posing as a “transitional candidate” is the left of the Democratic Party. A left that is fed up with ‘business as usual’ and he has the enthusiasm of the new generations on his part. This left wants to attack the structural problems of the country head-on, from an improper sanitation of an industrialized country, to the extreme precariousness of work, the abandonment of vast regions punished by globalization or the greater inequalities of the Western world.

All these factors served as a breeding ground for a billionaire traveling by helicopter and limousine to become the hero of the workers. That was the great master play of the best trilero the world has seen in a long time, a Trump who will continue to cast his furious shadow over the country for a long time.