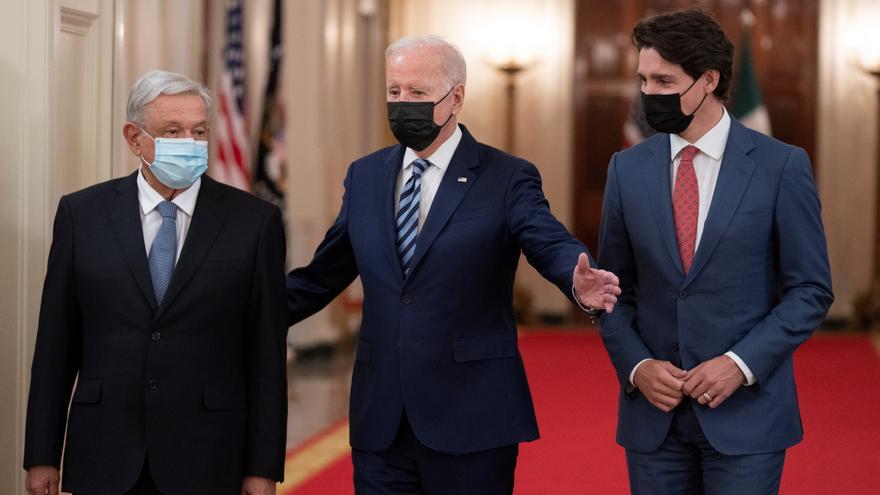 The president of Mexico, Andrés Manuel López Obrador, has urged his American counterpart, Joe Biden, and the Prime Minister of Canada, on Thursday, Justin Trudeau, to push for a North American production plan to “replace imports” from Asia.

This has been claimed in the framework of the trilateral meeting that have maintained the leaders in the IX North America Summit which took place this Thursday in Washington and which has left the first joint photographs of the leaders.

López Obrador recalled the “Right decision” of the countries with the free trade agreement between the United States, Canada and Mexico, known as TMEC, to point to the need for “economic integration” as the “best instrument” to face competition “derived from the growth of other regions of the world.”

The Mexican president has directly referred to “the productive and commercial expansion of China”, which dominates the world market above the three North American countries as a whole, a “gap that dates back only 30 years.”

“If the trend of the last decade continues, in another 30 years, By 2051, China would have control of 42 percent of the world market and we would (…) be left with 12 percent, which, in addition to being an unacceptable disproportion in the economic field, would keep alive the temptation to bet on solving that disparity with the use of force, which would endanger us all, “the president warned in this regard.

The “most convenient” thing to do is “strengthen” the economies of Mexico, the United States and Canada, has urged, to stress that North America has “many advantages” for this, including the “workforce”, “technological development”, “natural resources” or the possibility of “saving on transport” due to the proximity of the territories, in addition to the “sufficient demand” in national markets.

“It is a paradox that there is so much circulating in North America and the Pacific ports are saturated with goods from AsiaAdd in the inflationary impact that this entails, “the Mexican president pointed out, which has led him to question:” Why can’t we produce what we consume in North America? ”

In this way, he has advocated for “jointly plan” the development of the three countries and “promote a productive investment program in North America for import substitution.”

“Very precise objectives must be defined jointly and myths and prejudices aside”, he has deepened, to underline that, in this context, “stop rejecting migrants when to grow workforce is needed which is not really sufficient, neither in the United States nor in Canada. ”

“Why not study the demand for labor and open the migratory flow in an orderly fashion?” “valuable instrument to consolidate production processes” and that North America develop “like no other region in the world” for the benefit of its peoples and nations.

Recognizes the US for its “commitment” to migration

On the other hand, López Obrador has expressed in the meeting for his “appreciation” to Biden for his “clear commitment” and “unequivocal” to “improve the situation of migrants”, a position that, in his opinion, “no president in the history of the United States has expressed.”

The Mexican president has specifically pointed to the proposal of “regularize the migratory situation of eleven million of people who live and work honestly in this great nation. ”

“I want you to have the support of Congress and legislators, both the Democratic Party and the Republican Party. We Mexicans will be attentive and, in due course, we will speak with respect and frankness, and also we will know how to reciprocate with gratitude and friendship “, he has told the tenant of the White House.

Also Read  Shiffrin loses the podium, but increases the overall leadership of the World Cup in Slovenia | Ski

For his part, Biden thanked the leaders for attending the summit, which had not been held since 2016, and remarked his ambition to “carry out a recovery, an economic rebound and also managing the challenges of migration “in the region.

“As leaders, we share great potential that we can harness with the talents of our populations. And today, that is what we can do with a partnership, as well as demonstrate that democracy can deliver results in the second half of the 21st century “, has added.

Along these lines, he has advocated for the resilience, protection of workers and improvement of cybersecurity, as well as support for SMEs to “flourish in the northern hemisphere”, as a way to boost the region after the pandemic.

Trudeau, for its part, has insisted on the “very strong bonds of friendship” of the three countries with their “vision, values ​​and principles” looking to the future.

“Our highest priority, of course, is end COVID-19 and focus on economic recovery, strengthen supply chains and integrate the economy of the northern bloc to support jobs and the middle class in our three countries, and this will be supported by an agreement that can support workers’ rights “, has asserted.

The summit has hosted separate meetings between the leaders on Thursday, to conclude with the trilateral meeting on issues of integration, migration, health and economic recovery.

The appointment, known as Summit of the “Three Friends”, not held since 2016, when former US President Donald Trump unilaterally decided to suspend these meetings under protectionist arguments against free trade.