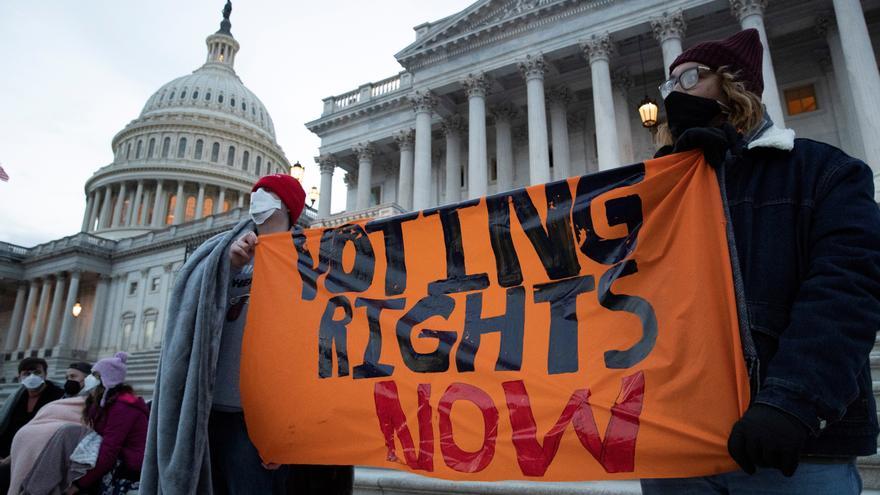 The last attempt by US President Joe Biden to protect the right to vote foundered this Wednesday in the Senate due to the unanimous blocking of the Republican opposition and divisions within his own party.

First, the Republicans refused to consider the great electoral reform of Biden using a maneuver called filibustering and that allows to prevent the debate of any measure if a minimum of 60 votes is not gathered. Hours later, the leader of the Democrats in the Senate, Chuck Schumer, proposed a change in the rules of that chamber to reduce the power of filibustering and get the measure debated. However, as predicted, failed to muster the support it needed from its ranks. Democratic Senators Kyrsten Sinema of Arizona and Joe Manchin of West Virginia joined the Republicans in voting against changing the rules of the game. The Republican blockade and the internal differences between the Democrats are a setback for Biden, who celebrates one year in power this Thursday.

The bill that the Democrats wanted to pass in the Senate would have guaranteed the right to early voting and voting by mail, in addition to establishing that the election day is a national holiday, which could increase participation since the US always holds the elections on a working Tuesday in November. It would also allow the Justice Department to monitor any changes to election laws in states that have a history of discriminating against racial minorities.

Eight hours in line to vote

The African-American senator from Georgia, Raphael Warnock, whose position could be in danger due to the voting restrictions approved in his state, gave an emotional speech in the chamber and considered that today has a “moral” aspect for the United States and warned that will go down in the history books. He recounted how a woman named Verona told him she had to wait in line for eight hours in the rain to vote in the November 2020 election, and explained how some college students they decided not to go to the polls because they did not want to miss classes. “Those are the consequences of the laws that are being passed in Georgia and across the nation,” said Warnock, who was a pastor at an Atlanta church where civil rights leader Martin Luther King, assassinated in 1968, preached. de King, along with other civil rights leaders, have been pressing the Senate in recent days to end voting restrictions that harm minorities and the population with fewer resources, who already go to the polls in lower proportions.

Also Read  The American dream, in a Korean key

Biden, for his part, said in a message on Twitter that he was “deeply disappointed” by the failure of his major electoral reform. “I’m deeply disappointed that the Senate has not defended our democracy. I am disappointed, but not discouraged, “said the president. However, he promised that he will continue promoting changes that allow protecting the right to vote in the United States and once again positioned himself in favor of a modification of the Senate rules to reduce the power of filibusterism, something he had resisted asking for until a few days ago.

US Vice President Kamala Harris, who serves as Senate President, attended the vote in a sign of the importance the Administration attaches to the issue. In statements to the press, she promised that neither she nor the president “will throw in the towel” and assured that protecting the right to vote is “fundamental” for American democracy.

The current battle over the right to vote comes about because In the United States, there is no central electoral system and each state sets its own rules. electoral. During the pandemic, many territories relaxed the requirements to vote by mail or in advance, which caused a record participation in the 2020 elections and fueled conspiracy theories by the then president, Donald Trump (2017-2021), and his followers about an alleged massive fraud at the polls, dismissed by the courts for lack of evidence. In reaction, Republicans have passed 33 laws in 19 states over the past year that limit the vote. Some of these laws make it more difficult to vote by mail, shorten the deadlines for going to the polls in advance and even penalize giving water or food to those who wait long hours in line to exercise their right.