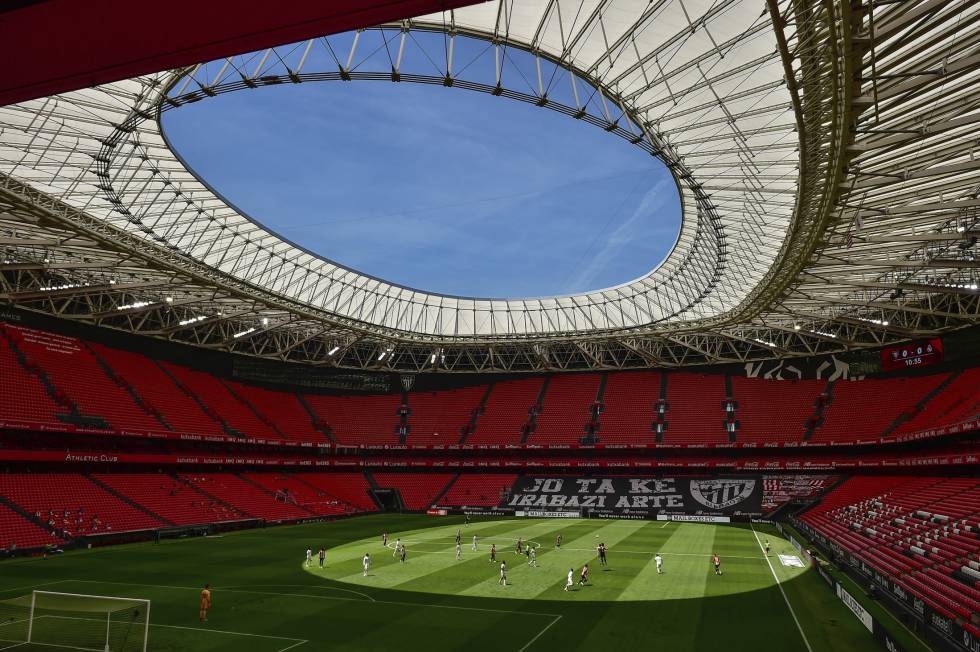 The Bilbao City Council has proposed to UEFA that the Eurocopa matches to be held in San Mamés, if the European body maintains the format and venues, be open to the public. According to the report that the Bilbao consistory has reached a consensus with the Spanish Football Federation, there would be around 13,000 spectators who could attend the scheduled matches in San Mamés, which has a capacity of 53,289, that is, the municipal authorities foresee 25% of the capacity. This Wednesday was the deadline imposed by UEFA to provide the necessary documentation on the presence of spectators in the fields of the continental competition, which is held from June 11 to July 11.

It is the regional governments that can allow or veto the presence of the public in the stadiums, so the Bilbao City Council has worked in coordination with the Department of Health of the Basque Government and the RFEF to establish the criteria to apply in this case, and refers to the reports of the Basque health service, Osakidetza. The council ensures that the proposal to UEFA arrives after several weeks of work in coordination with the RFEF, which will send UEFA the documentation agreed between the parties. The mayor of Bilbao, Juan María Aburto, has also sent a letter to UEFA CEO, Martin Callen, in which he expresses his gratitude for the facilities he has provided and his willingness to resolve the matter.

UEFA announced in March that it could reduce the number of venues depending on whether or not there was an audience in the stands. From the European body they warned that if people were not allowed access to the stadiums, the cities would be excluded. The final decision, after the proposals received to date, will be made on April 19. The venues initially planned for the celebration of this European Championship are, in addition to Bilbao, these other eleven cities: Saint Petersburg, Baku, Dublin, London, Glasgow, Rome, Copenhagen, Munich, Budapest, Bucharest and Amsterdam.

The power to admit the public in the Spanish fields is exclusively autonomous. The absence of spectators in the First and Second Division stadiums is due to specific agreements between the Higher Sports Council and the Professional Football League, which extends to all its clubs. The final of the Copa del Rey was held without an audience despite a threat from the Federation to admit a percentage of the capacity at La Cartuja. In that case, the government considered it inappropriate. However, there was no prohibition of any kind. The Minister of Health, Carolina Darías, only made one recommendation: “In this sporting event, although it represents a lower percentage of the capacity, we are talking about more than 10,000 people. They will understand that given the situation that we find ourselves epidemiologically, it is not possible. This minister is going to work trying to seek consensus intensely so that this attendance of the public does not take place. It’s not the moment”. Finally, the RFEF resigned.

However, in other categories, the presence of the public has depended on the will of the autonomous governments. Already last October, the Extremadura derby between Badajoz and Mérido gathered 7,000 spectators at El Vivero. Racing has also brought 4,000 followers to El Sardinero. In the Basque Country the presence of the public in Second B, Third or lower categories is not allowed, although now a gap is opened with the proposal to UEFA for the European Championship, which has already received the message from the Italian authorities that the Olympic of Rome will host public in the continental competition.

Also other cities, such as Copenhagen and Saint Petersburg sent the message to UEFA. In the Danish capital, 12,000 spectators are expected in its stadium, 30% of its capacity, while in the Gazprom Arena in the Russian city the last four Zenit matches have already been played with an audience (22,000 spectators) and 50% will be authorized occupation during the Eurocup. Munich municipal authorities have also submitted their updated plans to UEFA for the German headquarters, according to AP.

On the other hand, according to Irish Times, UEFA would have demanded at least 25% of the capacity of the Dublin Arena, before a first option presented by the Irish authorities of 10%. Some English media speak that Wembley would host 45,000 spectators, half its capacity. Two other cities, Glasgow and Baku, seem to have cleared obstacles to host the Euro as well.