The “Bilbao Employment Plan 2020-2021” will create more than 1,000 new jobs to cope with the economic crisis generated by COVID-19. The plan, financed by the Basque Government and the council, is “the most important job offer generated in the Villa”, as highlighted by the Vice-Lehendakari and Minister of Labor and Employment of the Executive, Idoia Mendia, and the First Deputy Mayor of the City Council from Bilbao, Amaia Arregi.

The plan, which was presented today by both in the capital of Biscay, involves the hiring of almost a hundred more people than with previous programs, and will include those who lost their jobs after the declaration of a state of alarm for the coronavirus .

In total, an investment of 10.9 million euros will be made, of which the Basque Government contributes 8.9 million and the Bilbao City Council another two million, which represents an increase of more than 600,000 euros compared to the year previous.

The program includes two plans: the Ordinary Employment Plan and the Youth Employment Plan. Both are aimed at unemployed people registered in Lanbide and registered in Bilbao, beneficiaries of the RGI, under 35 years of age, long-term unemployed, people at risk of exclusion and, furthermore, as a novelty in the current pandemic context, those who have lost his job after the declaration of the state of alarm.

The Ordinary Employment Plan will boost 962 new posts of work in companies based in Bilbao, 264 more than in the previous plan, with an investment of almost 8.8 million euros. This time we want to encourage job creation in private businessesTherefore, it is estimated that 701 of the jobs will be generated in these companies, 61 more jobs than with the 2019-2020 program.

As a novelty, the hiring of people who have lost their jobs as a result of COVID-19 will be encouraged. In addition, companies that incorporate in their templates women, may benefit from a 10% increase in aid. 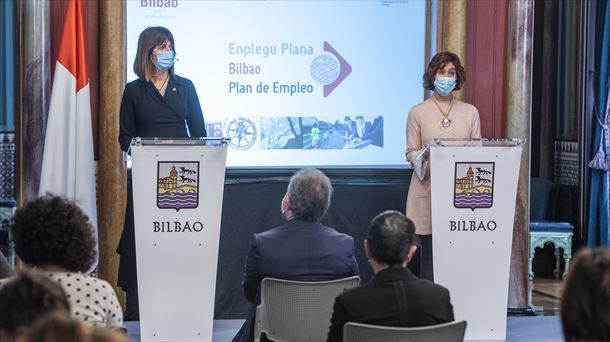 Mendia and Arregi, during the presentation of the plan. Photo: Bilbao City Council

Another 311 people will be hired by the City Council, through its municipal company Bilbao Ekintza, for municipal areas and entities.

As for the new Youth Employment Plan, endowed with a budget of 2.2 million euros and which will promote the hiring of 50 people under 30 years old with a medium or higher degree, for a period of 12 months full-time, by the City Council and municipal entities.

To these plans are added some “Singular Training and Employment Projects” that will be carried out in collaboration with Lanbide and Third Sector entities to promote the employability of low-skilled groups or in insertion processes in five Bilbao neighborhoods.

Vice President Idoia Mendia stressed that the Basque Government will invest 148 million euros in the next four years in local employment plans, which will favor the hiring of 15,650 people. In addition, it is planned to create “27,000 youth employment opportunities”, with a budget of 162 million euros, through training and empowerment programs.

Mendia has highlighted that the local employment plans are an “example of co-governance” and an “unequivocal commitment to intervene from the closest in a country strategy”.