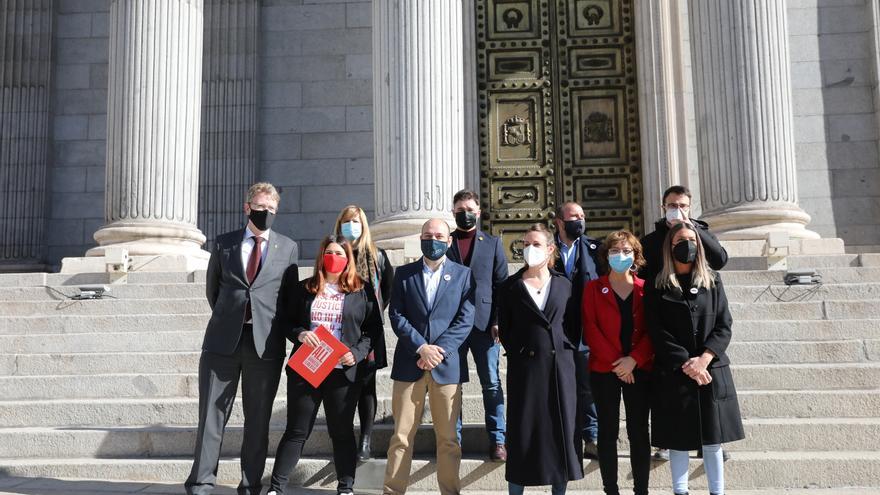 The golden rain that in the form of billions will fall softly on the Catalan independence movement so that it does not get angry and leave Moisés in diapers in Moncloa, does not end with the El Prat airport. The route plan designed bilaterally from Government to Government, as corresponds to two sovereign nations, it contains other favors for the very deficient Catalan infrastructures and for its impoverished economy. Thus, according to La Vanguardia, the Gerona aerodrome will be half an hour from Barcelona thanks to a new AVE line, as required by the Generalitat (do not get angry, the connections from Alicante airport with the city itself, with Elche, Benidorm, Torrevieja or Murcia are still efficient, fast and modern). And there is more. The AVE will also arrive at Reus airport. That is to say, my friends, that while the two of you take five hours to go from Alicante to Barcelona on the witch’s train, an Extremaduran takes a lifetime to get to Madrid by train (Leave no one behind, Agenda 2030, Ministry of Social Rights).

Perhaps it is now understood why @sanchezcastejon He removed the dancer Miguel Iceta from the Catalan nightclub, banishing him to a party room more in line with his academic and sports qualifications: Minister of Culture and Sports. Iceta began – yes, he began – the careers of Chemical Sciences and Economic Sciences and, tired of so much career, he immediately abandoned them to dedicate himself to something less tiring: politics. And I say what I said because the winner of the millionaire European lottery is none other than the faithful Salvador Illa, that saving minister (perhaps they remember him from when the pandemic) who being in charge of Health in the middle of Covid, the slogan of his ministry read: “If you are healthy, you do not need a mask” (Illa). Well now what we are sick of millions, And to show that in Catalonia Illa won the elections, already without a mask, and that the one who really commands there, the determining party, is the PSC of Illa, Salvador will be in charge of saving the separatists from poverty in which they have plunged Catalonia, giving them the billions they need to continue with their ultra-nationalist, unsupportive and supremacist dystopia. If not, see the solidarity of claiming the exclusive control of the MIR tests (access to the medical specialty until now the same for all of Spain) by the Catalan independence movement, defiantly breaking the cohesion of the public health system, the principle of equality among the Spanish. A shame, a provocation that deserves the response of the Spanish medical community.

The problem of the millions that go to Catalonia continues to be who manages them and how. You see to what extent the embezzlement of public funds by Catalan secessionist politicians. You see with what cynicism, arrogance, arrogance and mockery; with what challenging tone does the Catalan Government intend, through the Catalan Institute of Finance, to endorse the leaders of the process the bonds before the Court of Accounts. And now, when Barcelona star Leo Messi leaves the club because the club, ruined (as Catalonia is), cannot pay the electricity bill, everyone looks at the Aladino de la Moncloa lamp (the Pardo light is no longer there ) Let’s see if you can give them a hand for being more than a club. Because the Catalan independentistas, with whom Barça feels so close, deserve that the rest of Spain continue to pay them their waste, their delusions, since the separatist virus became a pandemic.

While millions of Spaniards gather Easter candles to illuminate their poor lives because they have no money to pay the most expensive electricity bill in history, despite being under the protection of the most progressive government in history (for all, its Minister of Consumption Alberto Garzón, who must consume little sleep to think that Spaniards have to decide whether to turn off the refrigerator or leave it open at night empty of gender they can’t buy either); while Extremadura still longing not for an AVE, but for a train, even if it is made of coal, to be able to travel; while people from Alicante and Murcia suffer the humiliation of cutting off the water to irrigate the fields that Miguel Hernández used to sing; while Basques and Navarrese continue to enjoy fiscal privileges thanks to the unsupportive “quota” that no one wants to talk about; while the self-employed and the hospitality industry – burned with taxes – light a candle to the devil to maintain the energy of their refrigerators and industrial chambers all day, or that their products rot; While all that darkness hangs over a large part of Spain, billions fly to Catalonia and independence is shining brighter than ever. The rest of Spaniards pay the bill. To see more … even in the dark.