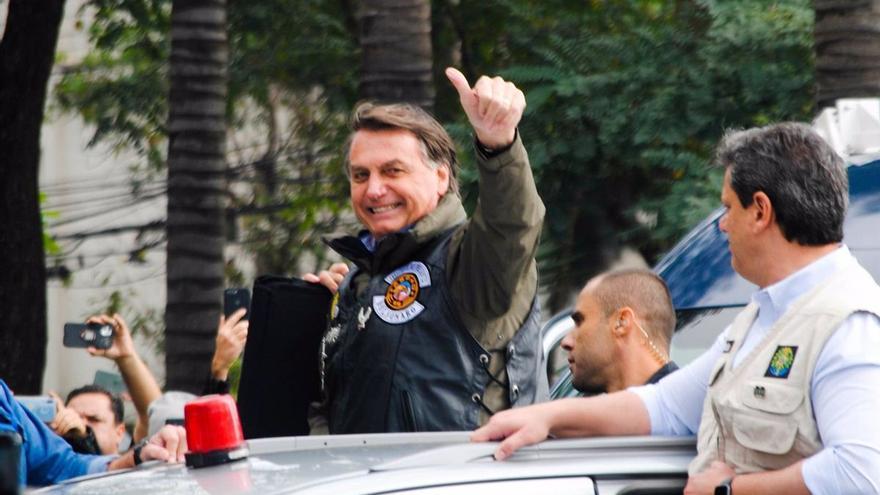 Under the protection of thousands of ultra-rightists that sheltered him in the Plaza de los Tres Poderes, Jair Bolsonaro launched this Tuesday in Brasilia an unequivocal political threat to the Congress and the Supreme Court Federal (STF). “This photo is of you, it is a statement, an ultimatum“The retired captain chose September 7, Independence Day, to make a show of force at a time when the decline in his popularity is sharpening and the chances of remaining in power beyond 2022 are waning. For Bolsonaro , their dreams of perpetuity encounter two increasingly insurmountable obstacles: On the one hand, Parliament, where their responsibility in the fight against pandemic that killed more than 540,000 people and the government’s attempt to replace the electronic ballot box with the ballot has been halted under the warning that next year’s elections may be suspended. On the other, the STF, which is investigating the president for spreading false news about the guarantees of the electoral system. “Either the holder of this Power of Attorney adjusts or that Power can suffer what we do not want“said Bolsonaro, referring to the head of the Supreme Court, Minister Luiz Fux.” We do not want ruptures, we do not want to fight with any Power, but we cannot allow a person to steal our democracy. ”

After listening to Bolsonaro, STF Minister Alexandre de Moraes stressed that on Independence Day it is strengthened with “absolute respect for democracy.” The president of the Superior Electoral Court, Luís Roberto Barroso, another of Bolsonaro’s targets of anger, assured that there is no possibility of “return to the past” dictatorial. The same did the president of the Senate, Rodrigo Pacheco. A survey by the consulting firm Datafolha shows that the 75% of Brazilians consider that the democratic regime is the most appropriate, while 10% maintain that the dictatorship is acceptable on some occasions. “It is clear to everyone that rampage caused by Bolsonaro stems from his inability to govern and from the prospect of being sent home by Brazilians in free and fair elections, as all those held in the country have been, “said the São Paulo newspaper. sheet in his editorial this Tuesday.

Bolsonaro’s fall from grace has other reasons: the Brazilian economy is giving off auspicious signals, exacerbated by the energy crisis. Business sectors that supported the arrival of the extreme right to the Government have begun to distance themselves. But the president is convinced that he will reverse the horizon of misfortune. “From today a new story begins to be written. I ask God for more than wisdom, strength and courage to decide well. “Bolsonarism has also mobilized in Rio de Janeiro. Another demonstration is expected in São Paulo, with the presence of the retired captain. The opposition has also decided to act presence in the megalopolis to repudiate coup threats.

According to Miriam Leitão, columnist for the Rio de Janeiro daily Or BalloonSectors of the political center, including the former mayor of São Paulo, Gilberto Kassab, no longer rule out supporting an impeachment against Bolsonaro. “What leads the leader of a centrist party to launch such a statement at a time when the president fills the streets with followers? It is that in the act that Bolsonaro has called, he will seem strong, but it’s actually more isolated“.

The offensive of the head of state has another explanation in the figure of Luiz Inacio Lula da Silva. The man who ruled Brazil between 2003 and 2010 appears in polls as the clear winner of next year’s elections. Lula did not miss the opportunity to speak on Tuesday. “Instead of adding, it stimulates division, hatred and violence“he said through a video.