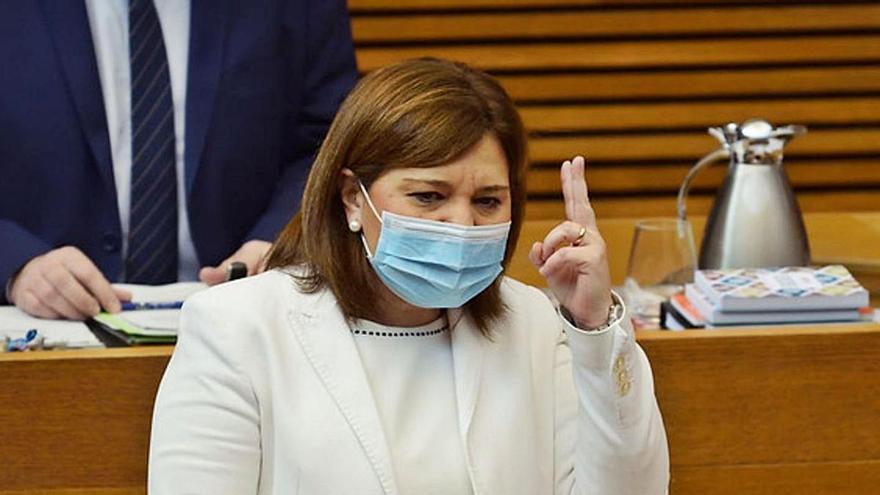 Yesterday was probably not an easy day for the former mayor of La Vall d’Uixò. Arguably not easy. It was the first time I had attended a control session at Ximo Puig After his withdrawal from the race to retain the party presidency. The pressure exerted from the headquarters of Pablo Casado and Teodoro García Egea took effect and Bonig, publicly, admitted his defeat last Monday; the last stumbling block to roll out the red carpet for Carlos Mazón in order to erect him as the new king of the PPCV. Probably, the commitment of the party apparatus to enthrone the president of the Diputación has not been what has hurt Bonig the most. The silences of her closest collaborators, who have not come out to defend their leadership in the face of the next regional party congress, is what has really saddened her, they admit from their closest circle. It is true that in her speeches, the Castellón received the unanimous applause of her peers on the bench yesterday, but it is just as true that the still leader is fully aware that chess movements have started for some time in her group to try to find fit into the new directive. In fact, the until now general secretary, Eva Ortiz, appealed yesterday to the integration of the current PPCV team into the next executive.

That is a process, that of the renewal of the party apparatus, which gives the starting signal today with the convocation of the board of directors that will give way to the celebration of the regional congress, originally scheduled for the end of June or the beginning of July. . Different sources of the popular brand agreed yesterday that the still president of the PPCV is being especially hermetic about what her future will be. Nobody seems to know what it will announce today, that is, if it will give any clues about the direction it will take from now on. In different sectors of the gaviota training it was speculated that some institution based in Madrid could be given an outlet.

While no one doubts that Genoa would be negotiating with Bonig a way out to alleviate the humiliation that, ultimately, has led him to renounce his intention to revalidate the presidency of the party after having announced it from the rooftops on countless occasions, yesterday, the spokesperson in the Cortes remained firm in the role of leader, of head of the opposition. She took advantage of what could be her last minutes as a trustee to review the management of the Botànic and make a comparison with that of the Madrid Executive. “Yes, there is a difference between the models: freedom or communism, ruin or prosperity,” he snapped at the socialist, to which the president of the Generalitat replied: “Freedom yes, but without anger.”

In his speech, Bonig did not clear any doubts about the paths that his political career will follow, if he wants to continue it, after six years in the very first line in the Community. However, he did not want to waste a second in the inspection of the Botànic, or what is the same, in the defense of the strategic lines that have marked his speech before the Government of Puig and also of Sánchez.

«You do not serve as president, you are not a moderate man, you are a not very serious man who guarantees a lot of imposition and little freedom. During these six years of government he has attacked and persecuted educational and linguistic freedom, to choose an educational center, a doctor, freedom of information, justice, business, freedom to invest, the right to private property. You already know: communism or freedom ”, stressed Bonig. Among other issues, he took the opportunity to reproach Puig for his “thunderous silence” on the change in the financing model, criticized that the Community is the fourth with the highest tax burden compared to Madrid, “which is the last”, and questioned the policies of the left in health, social or crisis management matters derived from the covid. Policies that, for his part, the president was refuting with the botanical argument, without attacking Bonig at any time for his delicate political situation but fighting, yes, Hurricane Ayuso.

At the meeting, the members of the organizing committee will be appointed, and the still president of the PPCV closes

The board of directors of the Popular Party (PPCV) meets this afternoon to convene the next regional congress, to be held between June or July, and in which the new leadership will be elected. It will be a congress of acclaim, several sources agree. The body responsible for convening ordinary congresses meets today, three days after the president of the PPCV for the last six years, Isabel Bonig, has communicated to the national leadership of the party that she will not stand for re-election in that conclave. The party statutes establish that a minimum period of 45 days must pass from the call to the holding of the congress, although the general coordinator of the PPCV, Eva Ortiz, has already announced that it will take place in July. The meeting of the PPCV board of directors will take place from six o’clock in the afternoon at the party headquarters and will be held electronically, and on the agenda is the convening of the regional conclave, with the setting of the date and the appointment of the members that will form part of the organization committee of the congress. Likewise, the still president of the PPCV and trustee of the PP in the Valencian Cortes, Isabel Bonig, is expected to close the meeting, according to party sources.