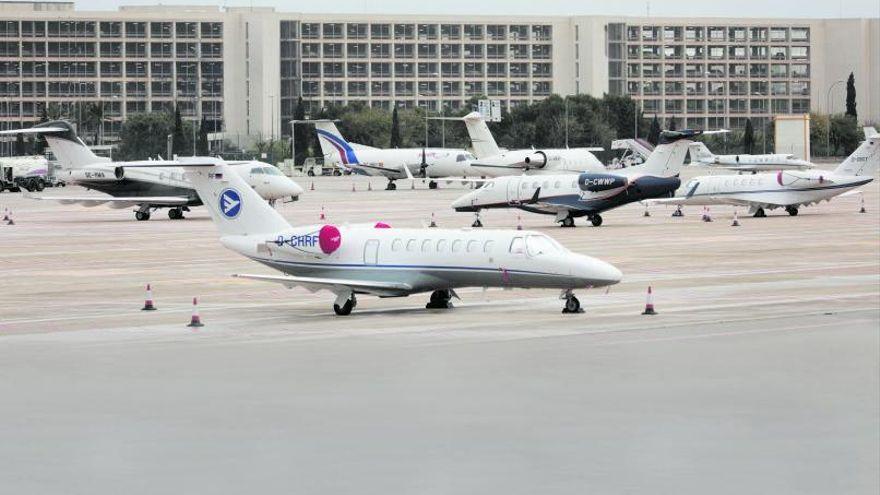 Despite the pandemic, executive aviation continues to enjoy good health in the Balearic Islands, or precisely to her is due the boom in private jet arrivals, mainly, to the airports of Mallorca and Ibiza. This Easter 2021 there has also been an explosion of private flights: the archipelago has registered an average of 43 daily landings —24 per day in the case of Son Sant Joan—, especially flights from Germany, other autonomous communities and Switzerland.

With the holidays already underway, and coinciding with the favorable epidemiological situation in the Balearic Islands, between Sunday March 28 and Easter Monday April 5, a period of nine days, 387 private planes arrived at the three Balearic airports, according to information provided by Europair, a company specialized in hiring and managing charter flights.

Of the total 387 jets, a little more than half, 220 planes, landed in Son Sant Joan. 134 aircraft landed at the Ibiza airport and 33 at the Maó airport. They came from Germany, Switzerland, Austria, France, Italy and from other aerodromes in perimeter Spain.

This air broker, founded in 1994, has analyzed the arrivals of executive aircraft according to the country of origin of the aircraft. For Gerardo Manzano, its CEO, the large volume of private jets that continually land in the Balearic Islands, in the midst of a pandemic and at Easter – with European countries and the Spanish authorities advising against traveling – responds to two main reasons: the drop in air connections and frequencies in commercial aviation due to the health crisis, and the security offered by flying in a private aircraft with a select group.

Last year, the archipelago was the community that led executive aviation operations in Spain, with Son Sant Joan as the first airport, Manzano adds.

On average, two or three passengers can reach the airports of Palma, Eivissa or Maó on one of these devices. They have their own terminal, without having to meet crowds or queues to pass the health controls imposed by the covid-19.

Aena ensures the privacy of its VIP travelers to the maximum, so much so that it does not even provide this newspaper with the forecast of landings and take-offs of private flights, on the grounds that they are the same, “private”, and that they are subject to change until the last moment. The only information that the manager of Spanish airports provides on demand is the movements (without distinguishing take-offs and landings) of executive aviation and the number of passengers, by month in arrears.. No data on where they come from.

For this reason, the X-ray produced by Europair goes beyond which countries the jets that arrive every day at the Balearic airports have been traveling from this Easter.

In view of the archipelago, the main source market for tourists is the leader: 115 private flights have come from Germany in the nine days analyzed: 87 to Mallorca, 25 to Eivissa and 3 to Menorca. Also last December, on the occasion of Christmas, Europair noted an increase in private flight operations originating from German airports.

This Easter from other CCAA there were 90 landings. From Switzerland, 56 jets. They are followed by France, with 28 arrivals, Italy with 20 and Austria with 10 landings.

These flights, like those of commercial aviation, have grown at Easter fueled by the demand of travelers in search of vacations. And in all cases, leaving behind their places of residence for a few days with figures of coronavirus infections much higher than those of the archipelago.

The case of Switzerland is striking, which at that time quadrupled the incidence of covid in Mallorca. The government of the transalpine country, like that of Chancellor Angela Merkel, advised against traveling, but before Easter Spain left its areas of high risk of contagion and the quarantine was eliminated upon return. From Swiss airports, 30 flights arrived in Mallorca, 24 to Ibiza and 2 to Menorca.

In the case of the largest pitiüsa, the landings from Italy and France also stand out.

Air traffic controllers have not missed the influx of private flights. Last Thursday, saying goodbye to Holy Week, they managed 50 movements between landings and take-offs at Palma airport, on Friday, another 40, according to Aena data provided by the Union of Air Traffic Controllers (USCA). It is “An atrocity”, they consider, taking into account the low numbers of flights that move after a year of crisis. A reality that they already confirmed last year, with the July record: Son Sant Joan touched 2,000 private flights, 21% more than in 2019, when the covid was neither there nor expected.