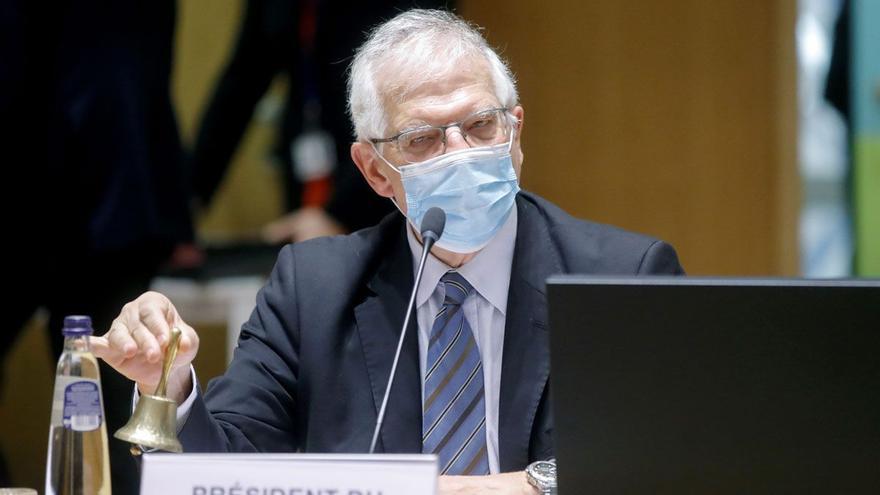 The European Union For the time being, it will not follow in the footsteps of the United States and the United Kingdom in withdrawing diplomatic personnel from its embassy in Ukraine. Despite the increase in tensions, due to the accumulation of 100,000 Russian soldiers on the border, the head of European diplomacy, Josep Borrell, has ruled out this possibility for now and has urged do not dramatize. “We are not going to do the same because we don’t have any specific reason. I don’t think we should dramatize while the negotiations continue and are continuing. I don’t think we have to leave Ukraine and leave”, said the High Representative for the EU’s foreign and security policy upon arrival at the meeting of EU foreign ministers.

This is the second meeting in ten days in which they will discuss the tense and complicated situation between Russia, Ukraine and security in Europe and in which the US Secretary of State, Antony Blink, from whom they are awaiting a summary of the contacts he had last Friday with the Russian foreign minister, Serguei Lavrov, in Geneva. “Secretary of State Blinken will explain to us the reasons for the announcement,” Borrell explained about the withdrawal of diplomats from the country, a measure that the British embassy in Kiev has also decided to adopt. “There is no decision in this regard, unless Secretary Blinken gives us information that justifies this movement,” Borrell insisted to questions from journalists.

According to Borrell, the meeting should also serve to further strengthen coordination with the United States and continue preparations to adopt new sanctions against Russia in the event of aggression against Ukraine. “We want to act under strong coordination with our allies, U.S, Canada Y United Kingdom. For the moment, we continue to prepare a powerful package of sanctions, but today we will not approve anything concrete because it is a process that is underway. But everything will be ready when necessary”, he explained without detailing what type of sanctions they prepare.

The Danish Foreign Minister, Jeppe Kofod has made it clear that if Moscow attacks Ukraine, the EU will impose “political and economic sanctions never seen before”, he said upon arrival at the appointment. “Russia should know, (President Vladimir) Putin should know that the price of using provocation and military force to change the borders in Europe will be very, very high. We are prepared to adopt the most severe sanctions, more severe than those of 2014”, he warned about the economic punishment imposed in July 2014 after the annexation of the Crimean peninsula. Your Lithuanian colleague Gabriel Landsbergis For his part, he has defended the need to continue arming the Ukrainian Army because “we are convinced that a war is a real possibility,” he added.

Faced with the harshness of some delegations, other ministers have chosen to emphasize dialogue, the importance of diplomatic channels and the need to avoid an escalation of tensions. This is the case of Spain. “This is the time for the 4 Ds: Diplomacy, détente, de-escalation, and deterrence. This is what is important at the moment, that it be diplomacy that is at the forefront”, Minister José Manuel Albares claimed. Along the same lines, his Luxembourgish colleague, Jean Asselbon, has warned that the important thing at the moment is to avoid a war. “It is the role of foreign ministers. The doctor is here to prevent the patient from dying and we are here to prevent a war”, he said.

For his part, the Irish Minister Simon Coveney has once again urged Russia to reduce tension and has asked the Twenty-seven to close ranks and send a message of unity. “If Russia decides to invade Ukraine militarily, there will be severe consequences in terms of sanctions and restrictions. which will continue quickly and will be the most extensive in the EU in many decades”, he claimed. Precisely Dublin, as announced, has received a notification from the Kremlin announcing naval exercises 240 km from the Irish west coast. “These are international waters and we have no power to prevent it but I have made it clear to the Russian ambassador in Ireland that they are not welcome. This is not the time to increase military activity in the context of what is happening in Ukraine,” he explained.