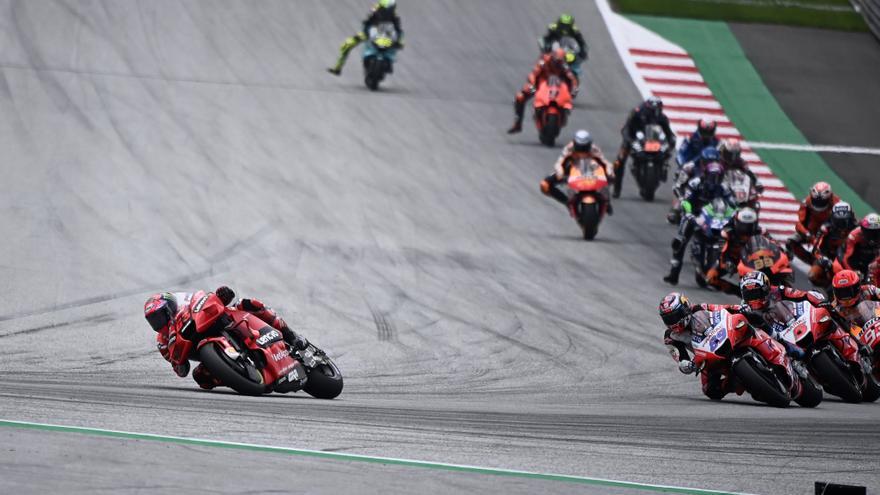 The South African Brad Binder (KTM RC 16) took a chance when it started to rain at the end of the Austrian Grand Prix of MotoGP at the Red Bull circuit in Spielberg and managed to impose his strategy of not changing bikes until the lowering of the checkered flag, though not without agonizing suffering.

Binder chose not to go into his workshop to change the motorcycle for the one with rain tires, while all his rivals did, Fabio Quartararo, Francesco ‘Pecco’ Bagnaia, Marc Márquez and Jorge Martín and he was right in his decision, as he managed to finish the race first by managing to stay on top of his bike in front of the 86,366 spectators who filled a good part of the Austrian track.

In a real ice rink. With dry tires in a real pool 💦💦💦 What a beautiful race and podium for @88jorgemartin! 👏👏#AustrianGP 🇦🇹 #MotoGP 🏁 pic.twitter.com/9ibXdNiYgW

The first blow of effect in the MotoGP race occurred with all the pilots in position in the starting formation, when it started to rain on the Austrian track and the nerves seized almost all the teams, mechanics, engineers and pilots included, knowing that depending on the correctness of the decision they made, this would be their performance in the 28 laps to which the test was scheduled .

But it was just a few drops of water and although some teams brought other types of tires in hand, practically all the pilots came out with the material initially planned since the test was declared dry.

Ever so slightly different to his first!!! 🤯#AustrianGP 🇦🇹 pic.twitter.com/4TH1Rh6l81

Even before the first lap was completed, Race Direction already showed the white flag throughout the circuit, which authorized the riders to change bikes whenever they wanted, which is known as a race between flags, in which the strategy and intensity of the rain were going to become real protagonists Of the test.

Martín barely lasted one lap in the lead, being overtaken by Bagnaia, Zarco and Márquez after making a mistake in turn four, while the world leader, Fabio Quartararo, lost a place in favor of Australian Jack Miller (Ducati Desmosedici GP21) , with whom he entered into a nice fight It was joined by the current MotoGP world champion, the Spanish Joan Mir (Suzuki GSX RR), then seventh. The first victim of the race was the Italian Enea Bastianini (Ducati Desmosedici GP20), who lost the left half of his motorcycle’s fairing and was forced to abandon it.

The winner of last weekend, Jorge Martín, recovered positions after the scare and on the fourth lap he was second again, although on the way to that position he had the occasional whiplash from his motorcycle and had to fight with Marc Márquez for the position for several laps, although shortly afterwards Fabio Quartararo was the one who got into that position. fight and surpassed that of Ducati.

One of the great gambles in #MotoGP history!!! 👏

Bagnaia stayed in front, in the sixth lap with Quartararo second and Márquez in third position, lightning warning of the storm and the rain falling at some points on the track, but two laps later the Frenchman assumed for the first time the “leading role” by unseating the Italian, who on the finish line regained his position and Quartararo starred in his first ad for exceeding the limits of the circuit.

The differences in the head were minimal, nobody gave their arm to twist and only the rain, starting to fall with greater intensity, could give a radical turn to the development of events, at that time starring Bagnaia, Quartararo, Márquez, Martín, Zarco and Miller ahead of a group of up to ten drivers. Joan Mir, up to that point somewhat bland, managed to overtake Jack Miller to try to catch up with the group in front, in which he had more or less Johann Zarco within reach, and Jorge Martín received his first notice for exceeding the limits of the route on three occasions.

But after the middle of the race, on the sixteenth lap, Bagnaia, Quartararo and Márquez had clearly left their rivals, with a Jorge Martín sailing solo in fourth place and Zarco defending himself from Joan Mir’s attacks, although he did not last long in that situation as he crashed into turn nine of the eighteenth turn. Two laps later Fabio Quartararo slipped into turn three and went long, which left the clear path to Marc Márquez to get second, behind Bagnaia and literally glued to him.

The last laps were going to be frantic for the three leading riders, who at no time were going to give up their efforts to fight for victory. Seven laps from the end and at the exit of turn three, the Repsol Honda rider made a spectacular attempt, but on the next straight ‘Pecco’ Bagnaia gave him back the overtaking speed. Everything returned to its starting point, but again the rain appeared on stage.

Australian Jack Miller and Spaniard Alex Rins (Suzuki GSX RR) were the first to enter workshops to change bikes, in a clear risky move, while both Jorge Martín and Joan Mir once again hit the leading trio and also the South African Brad Binder (KTM RC 16), with Marc Márquez as the new leader.

Three laps from the end, the leading quintet entered the workshop street, except for Binder, who chose not to change motorcycles and took the lead ahead of Spanish Aleix Espargaró (Aprilia RS-GP) and Italian Valentino Rossi (Yamaha YZR). M 1), with Márquez returning to the race tenth at the head of that group that had been the leader.

He bolted! The surreal change of motorbike from @88jorgemartin in full madness 💦💦#AustrianGP 🇦🇹 #MotoGP 🏁 pic.twitter.com/pJ2LD37uy7

Two laps from the end the Repsol Honda rider crashed into turn one and all his effort was in vain, although he returned to finish 15th, while Brad Binder was still in the lead, followed nine seconds behind by Aleix Espargaró, and Iker Lecuona (KTM RC 16), who overtook Valentino Rossi.

😱😱 It goes to the ground @marcmarquez93! Even though it was on rain tires. What a pity! #AustrianGP 🇦🇹 #MotoGP 🏁 pic.twitter.com/oz2yl23KYj

The rain played a decisive trick and Brad Binder knew how to take advantage of it to win, while from behind, with water tires Bagnaia and Martín recovered a lot of ground on the final lap to finish on the podium Austrian, with Joan Mir in fourth position, Luca Marini (Ducati Desmosedici GP21) fifth, ahead of Iker Lecuona, Fabio Quartararo, Valentino Rossi, Alex Márquez (Honda RC 213 V) and Aleix Espargaró. Alex Rins (Suzuki GSX RR) finished fourteenth, with Marc Márquez fifteenth and Pol Espargaró (Repsol Honda RC 213 V) sixteenth.