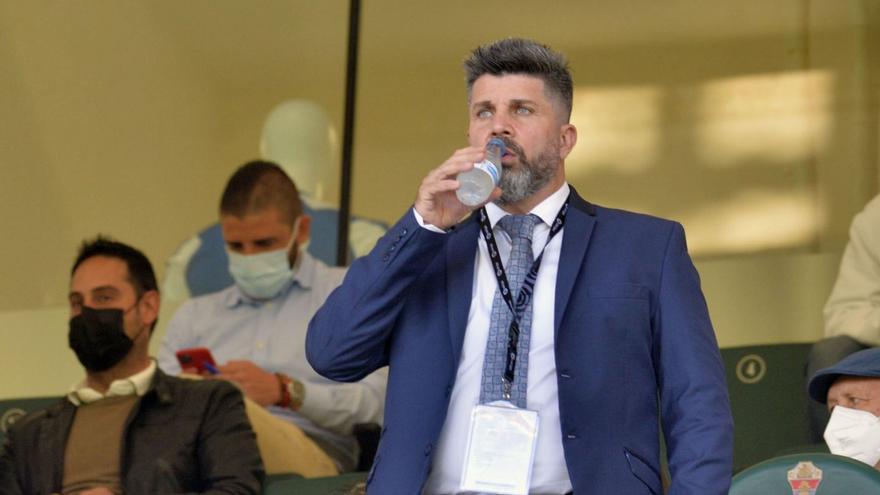 Christian Bragarnik was there all day yesterday for casting, but at the close of this edition he still did not have the white smoke to announce the new Elche coach to replace Fran Escribá.

The owner of the club from Elche is finding himself immersed in a difficult exit crossroads, because he cannot find the desired coach to take over the team.

Furthermore, the Argentine investor has encountered an added difficulty. With Hernán “Valdanito” Crespo, who is a coach of his portfolio, there are doubts that he can train in Spain and could have the same problem that happened with Jorge Almirón to legalize his file. The UEFA Jira Panel, which is the body that decides the validity of non-EU technicians, requires that they have worked for five seasons in the highest categories in different countries. Hernán Crespo was in Italy at Parma, but as technical director of the lower categories; and in Modena, who plays in Serie B. The Argentine coach has only served two seasons in Argentina, at Banfield and Defensa y Justicia; and another in Brazil, in Sao Paulo. Therefore, UEFA could prevent the Royal Spanish Football Federation (RFEF) from processing its license.

The other Argentine route is Eduardo “El Toto” Berizzo, who has ended his relationship with the Paraguayan national team and has experience in Spain after spending time with Celta, Sevilla and Athletic Club de Bilbao. However, Berizzo is not convinced of taking the Elche project and prefers to wait for a team to start the next season.

The dance of names of Argentine technicians who are related to the franjiverde entity is wide and has among other protagonists Mauricio Pellegrino, Gustavo Poyet or Antonio “El Truco” Mohamed. In principle, it seems very complicated for any of them to land in Elche.

Also Read  The Chavista Prosecutor's Office intensifies its attacks on journalism and attacks the reporter who uncovered the businesses of Alex Saab, an alleged figurehead of Maduro | International

On the Spanish road, which is the preferred route, due to his knowledge of LaLiga, a multitude of names have also appeared. Paco Jémez, José Luis Mendilibar and Javi Gracia, who were on Bragarnik’s extensive list, have lost strength over the hours and have not even had conversations with the owner of the club from Elche.

In the last hours the name of Pablo Machín has appeared, who is currently training at Al-Raed FC in Saudi Arabia. Bragarnik is seduced by the option of the former coach of Girona, Sevilla and Alavés, but the problem is the succulent contract he has, which he would have to resign to come to Elche. Sources close to the Soria coach point out, however, that they are studying the possibility.

Other alternatives that appear in the book of the largest shareholder of the Elche club are Francisco Rodríguez and Sergio González. They like their youth and experience in teams at the bottom of the classification, who know what it is to suffer to maintain the category. They are two coaches who have a chance to reach Elche and who have won options.

Francisco is also in the orbit of Granada, which on Friday could do without Rober Moreno and that of the Almeria coach is a very pleasant possibility.

Bragarnik is finding more problems than expected to sign a coach that fits his tastes and Elche’s profile. The owner of the club from Elche is an expert negotiator and usually remains calm at all times. But time is also tightening and he does not have a second coach to take over the team on a provisional basis. The tanden René-Nino, who is in the subsidiary, would be the only option for the next match against Osasuna. Therefore, he hopes that throughout today he can launch the white smoke and announce the name of the new coach.

The new coach will have three games in seven days

The new tenant of the Martínez Valero bench will have a very busy start, with three games in just seven days. Elche will play this coming Monday, October 29 (9 pm), in El Sadar, against Osasuna. On Tuesday, December 2, he will travel to the Basque Country again, to face Leoia, in the first round, a single match, of the Copa del Rey. The clash was set for nine at night, but the Biscayan club announced yesterday that it was advancing one hour and it will be played at eight in the afternoon.

And to end the week, on Sunday, December 5, at four-fifteen in the afternoon, the Elche team will receive Cádiz at Martínez Valero, a direct rival in the fight for permanence, which they are obliged to win if not wants to seriously complicate its classification.

Therefore, the new coach of Elche will have a beginning of maximum demand in which the franjiverde team is going to play a good part of its future this season both in the League and in the Copa del Rey, in which they will be eliminated it would be a failure.