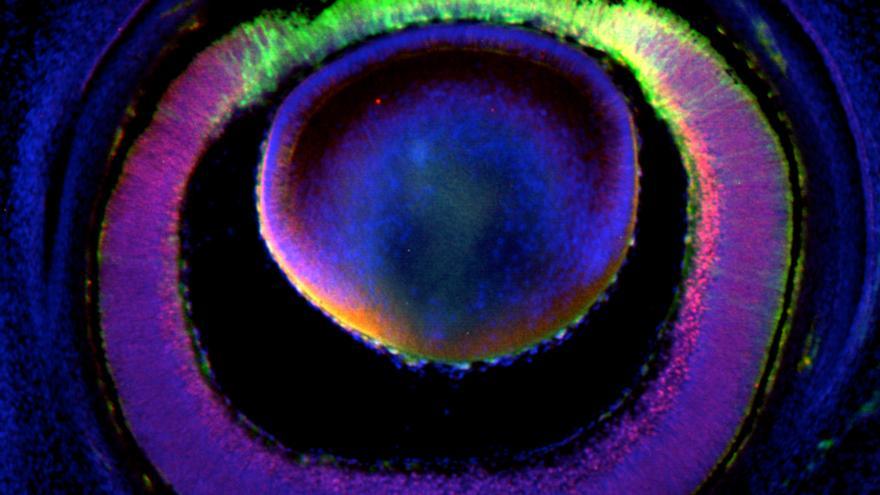 The brain is an extraordinarily complex organ. Making its research patent to society and the importance of this organ in human behavior is the philosophy of the Brain Week, an event organized by the Institute of Neurosciences, a mixed center of the Miguel Hernández University (UMH) of Elche and the Higher Council for Scientific Research (CSIC), to be held from March 15 to 21.

The programming of this edition has been adapted to a hybrid format, that combines the presence with the virtual, and its contents have been reinvented. In this edition, the schedule of activities brings together art and neuroscience.

Through the Brain Week, the general public will be able to know the operation of the Central Nervous System, as well as the origin of Universe and life. Among the scheduled activities, the Institute of Neurosciences UMH-CSIC has organized the exposition “Origins: colors and textures from the Big Bang to the Brain”, by the professor of Biochemistry and Molecular Biology at the UMH Luis Miguel Gutierrez.

This sample is open to the public until March 21 at the Fish Market of Alicante and invites visitors to a pictorial journey that goes from the creation of the Universe to the formation of the human brain. According to Luis Miguel Gutiérrez, “art can make science permeable to people in the humanities.”

Likewise, the UMH professor and plastic artist adds that “at the end of it all, this project is art, but from the perspective of a person who is a scientist and university professor and, with this exhibition, I make visitors feel all the love I have for science and art».

The exhibition «Origins: colors and textures from the Big Bang to the Brain» contrasts the contemporary artistic vision of the UMH researcher Gutiérrez on the Natural History with microscopy images, coming from the research groups of the Institute of Neurosciences, and astrophotographs, taken by astronomers from the Astroingeo group of the University of Alicante. This project is the evolution of a series of exhibitions that began in a “lighter” way, with fewer paintings and that, during the apprenticeship, the UMH researcher Gutiérrez decided to create something more complex than the sample that he exhibited at the National Museum of Natural Sciences in Madrid for 3 months and received 75,000 visits.

This evolution has made the artist go from narrating natural history from the big bang to the brain, but as it has progressed, it has become more complex. Professor Gutiérrez has introduced objects like the first life forms in the form of stromatolites (fossils that the researcher himself has brought from the Sahara) very striking in terms of structure; a brain; meteorites; etc. in order to stimulate visitors and put them in a situation.

In his work, Luis Miguel Gutiérrez does not use brushes, put the canvas on the table or on the floor and mix paint and varnishes in test tubes to build a story. It uses acrylic and oily pigments to which it incorporates a gel that allows them not to be diluted when mixed with other colors. Paint falls, mixes, repels, forms structures.

With this technique, get textures and compositions reminiscent of galaxies, to satellite images of Australian coral reefs and the inner structure of cells. «I never paint with anything in front»Gutiérrez explains. Although he began painting figurative pictures, over the years he has been seduced by abstraction: “creating from the inside out using my imagination,” he declares.

The Brain Week programming will be complemented with the Art and Neuroscience Cycle, which includes two informative conferences: “The Human Brain, the Universe made consciousness”, which will be given by the UMH professor Luis Miguel Gutierrez, and “What the eye does not see”, which will be imparted by the researcher Alex Gomez-Marin.

Painting by Luis Miguel Gutiérrez, professor at the UMH and plastic artist.

The first of the presentations will take place on March 16 at 7:00 p.m. and it is about science questions, “related in a way in which learning is very entertaining and evocative, which will not leave anyone indifferent”, according to the professor and researcher at UMH Gutiérrez. For its part, the Álex Gómez-Marín conference will be held on March 18 at 11:30 am.

Both conferences will have a dual format, with the presence of a restricted number of people in accordance with Covid-19 standards. Researchers will teach these Presentations in the Assembly Hall of the Institute of Neurosciences, located in the Santiago Ramón y Cajal building on the Sant Joan d’Alacant campus of the UMH, and will also be broadcast on streaming, through this link.