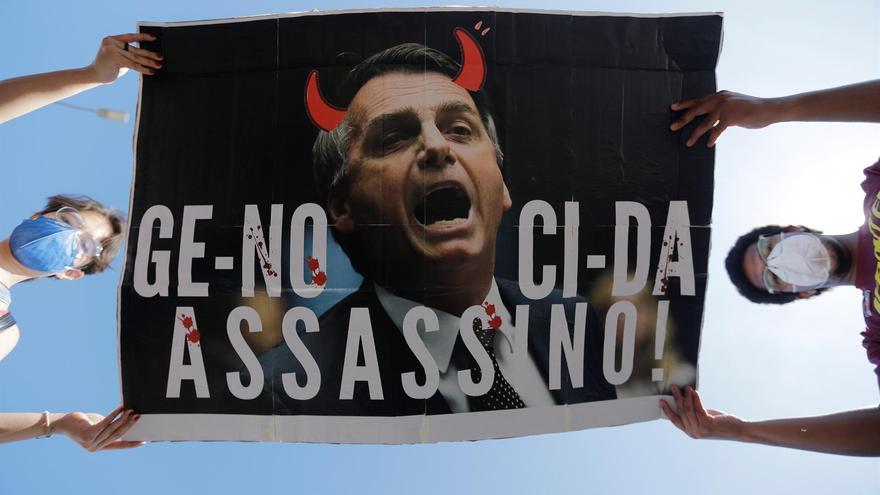 Brazil surpassed 500,000 deaths from covid-19 this Saturday, a fateful mark that the country reaches amid new protests against the erratic management of the pandemic by President Jair Bolsonaro.

The Latin American giant today became the second country in the world to exceed half a million deaths from coronavirus, behind the United States, which on June 15 reached 600,000 deaths from the disease.

Brazil, one of the countries in the world most affected by the health crisis, with 17.8 million cases, has seen the pandemic grow exponentially and this year alone it registered one of the highest numbers of deaths from coronavirus in the world.

In the first four months of 2021, the South American nation recorded more deaths than in the entire previous year, while between March 1 and today it added about 245,000 deaths, so at the current rate it could surpass the US in the next three months.

Brazil still does not contain the virus

The tragic record comes amid the silence of Bolsonaro, who has not yet spoken out on the matter, and at a time when Brazil is approaching a third wave of the disease, with an increase in cases and deaths in recent weeks.

In the last 24 hours, the country registered 2,301 deaths and 82,288 new infections of the virus, according to the latest balance of the Ministry of Health.

The daily average of deaths in the last 7 days rose above 2,000 after falling to 1,600 at the beginning of June, but it is still far from the 3,000 reached on April 12, when the country experienced its deadliest phase.

Regarding infections, the daily average has climbed to 72,000, close to the peak of 77,000 reached on March 25, an increase that specialists attribute, among other factors, to a decreasing adherence to social distancing.

The end of social restrictions has been defended from the first moment by Bolsonaro, leader of a Brazilian far-right denier, who this week once again affirmed that contracting the virus is “more effective than the vaccine,” contrary to what the community defends. scientific

The alleged omissions of the Government during the pandemic are being investigated by a parliamentary commission and this Saturday they were the object of demonstrations promoted by different social movements, mainly from the left, although they had the participation of groups and parties of the more moderate right.

Equipped with masks, thousands of people took to the streets again to press for the departure of the head of state on the day when the country exceeds half a million deaths, a tragic bar that was described as “genocide” by former President Luiz Inácio Lula da Silva.

Under the motto “Out Bolsonaro“, the protesters also demanded for a greater speed of the vaccination process, of whose initial delay they blame the Government due to the delay in signing contracts with large pharmaceuticals for the acquisition of doses.

Only 11% of the population has been immunized with the two doses of the drug in Brazil, although the percentage reaches 28% if the people who have only obtained one of them are taken into account.

Governors of various states hope to be able to vaccinate the entire population with at least one dose by the end of October, although the uncertainty about the delivery of vaccines still keeps the end of the pandemic in the country in the air.

“I work tirelessly to vaccinate all Brazilians in the shortest possible time and change this scenario that has devastated us for more than a year,” declared the Brazilian Minister of Health, Marcelo Queiroga, who lamented the 500,000 deaths from covid-19 in view of Bolsonaro’s silence.

The Minister of Communications, Fabio Faria, for his part, regretted that the 86 million doses of the anticovid vaccine applied in the country or the 18 million cured of the disease are not commemorated.

“The tone is always ‘the worse the better’. Unfortunately, they support the virus,” he added, referring to “politicians, artists and journalists.”