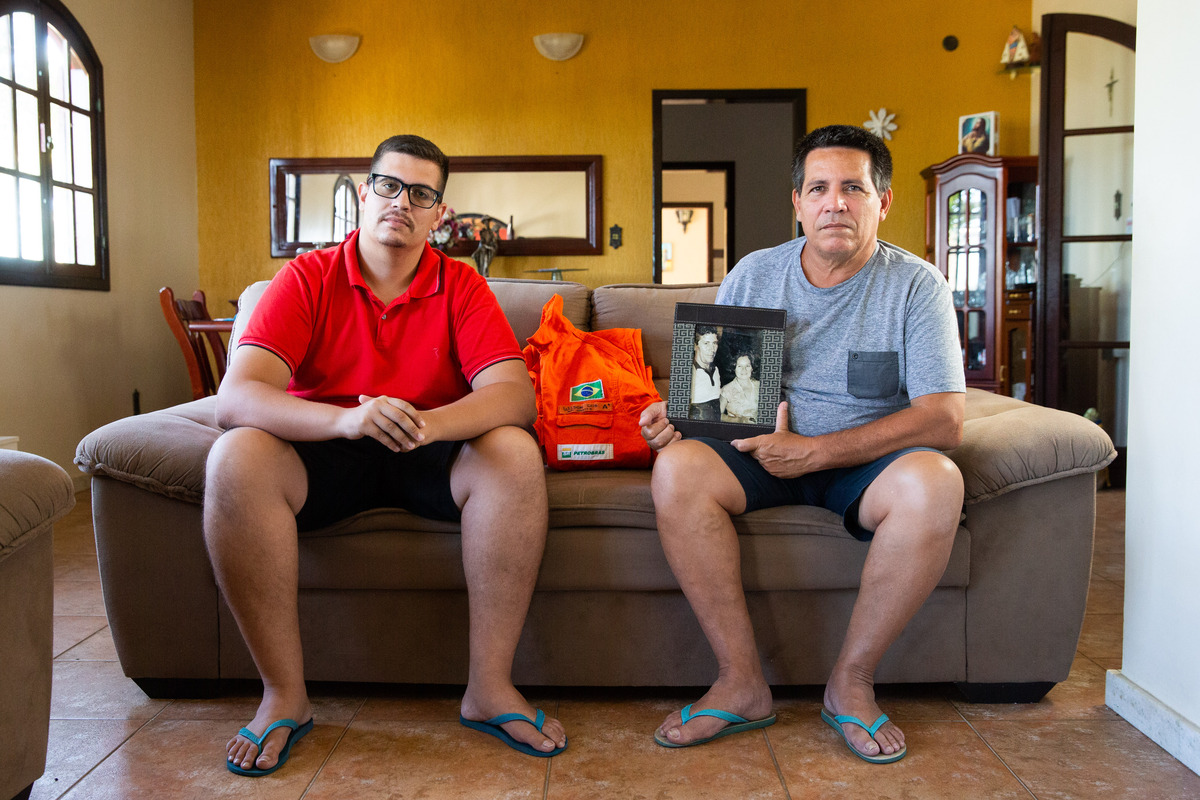 The family of retired oilman Wilson Reis is a portrait of the economic decline of the northern region of Rio de Janeiro, caused by the reduction of Petrobras activities in the Campos Basin. With the policy of sale of oil fields initiated by the Government of Michel Temer (2016-2018) and intensified in the current administration of Jair Bolsonaro, the region, once prosperous and a point of labor migration since the 1970s, suffers successive cuts in employees in the state oil company and its outsourced companies. Some 26,000 direct and indirect workers lost their jobs between 2014 and the first half of 2020.

Wilson, 58, has retired from Petrobras two years ago and is part of a family with three generations linked to the company. His father, Antônio, worked for the company for 25 years. One of Wilson’s sons, Fernando, 36, has already been an employee for 14 years. But something has changed. His youngest son, Vinícius, 26, could no longer take advantage of the good times in the region and is unemployed, although he wanted to follow in his family’s footsteps and work in the Petrobras production chain.

Wilson arrived in 1990 in Macaé, a municipality located 180 kilometers from Rio de Janeiro, where the Petrobras headquarters are located in the Campos Basin. He came from Bethlehem (in the north) to be employed as a production operator. He worked on a platform at sea for 15 days and the other 15 days he stayed at home. He also worked in the Urucu field, the first to produce oil in the Amazon. Wilson’s father, Antônio Rosa Reis, was a painter for the company for 25 years, until the 1980s. With just a primary education, Antônio supported six children in Bethlehem with his Petrobras salary “in a quiet way,” says Wilson. “There were limitations, he was a worker, but with a higher salary than other companies paid for his same position in Bethlehem,” says the oilman.

Moving to Macaé, Wilson soon realized the prosperity of the city and the contrast with the poverty of the Amazon. “There were better hotels, the city had many workers, many came from subcontracted companies,” he adds. Now, the situation is different: “We fight for a son, a relative of my wife or my mother-in-law to have a job. The economy is shrinking in this region. Two of my children are unemployed. They are qualified, but they don’t have a job, “he explains.

Of Wilson’s four children, Fernando is a technician at Petrobras and Yasmin, 31, works as a lawyer. The two youngest are unemployed. Liz, 29, is finishing her degree in architecture. The youngest, Vinícius, is an environmental technician and has not found a job since he finished the course in 2014 in the Federal Institute of Rio de Janeiro (IFRJ).

Vinícius wanted to get a position in a company that does environmental reporting for Petrobras. Before the crisis, Petrobras lenders went to federal institutes to look for apprentices. His brother Fernando, ten years older than him, thus entered the company. Federal institutes expanded greatly in the interior of Brazil during the governments of former President Lula da Silva (2003-2010) and Dilma Rousseff (2011-2016). In the north of the State of Rio, the Fluminense Federal Institute has 15 units of technical and higher courses. The objective of the network of federal institutes in the region was to train professionals for the oil sector.

“When I graduated as an environmental technician in 2014, there were already no job openings. Petrobras was reducing production since it introduced the pay-as-you-go regime and I was unable to work in an environmental company. Either I have to work in a city hall or I have to go to Rio de Janeiro, where the companies’ headquarters are located ”, he clarifies. The distribution system was established in 2010 for the pre-salt fields in the country and provides for the participation of the private sector in exploration and production in association with Petrobras. The state company is the operator of the zones and has a smaller stake, 30%, in the business.

The Campos basin was the most important in the country until commercial production of the pre-salt layer began in 2010. Currently, the production areas of the Campos basin have been closed, sold or are for sale to foreign private companies. During the years of the Workers’ Party governments, the company went into debt to invest in the entire production chain, including refining. But the strategy made Petrobras the world’s most indebted among oil companies. Operation Lava Jato in 2014, which revealed the group’s corruption schemes, also undermined its credibility.

It was under the government of former President Michel Temer that Petrobras changed its strategy: it sold billions in assets and gave priority to its investments in the pre-salt, whose fields are mostly located in the Santos Basin (southeast of the state of São Paulo ). The pre-salt, in addition to containing large reserves to be explored, has a higher profitability compared to other areas.

However, the areas located in the Campos basin pre-salt are for sale by Petrobras, such as the Albacora field. “There were more than 20 platforms deactivated or sold. There is an absurd reduction in production due to the lack of investment and the number of people working in the region ”, says Tezeu Bezerra, general coordinator of the oil workers union of the Norte Fluminense (Sindipetro-NF).

The privatization of Petrobras oil wells is not exclusive to the Campos Basin. The company has sold or is selling oil and gas exploration and production areas throughout the country, in addition to the refining business, gas pipelines and distribution of derivatives, such as gasoline and diesel. Petrobras has ceased to be a horizontal company to become a vertical company, losing competitiveness and profitability.

The cities of Campos and Macaé, the largest in the north of Rio de Janeiro, experienced rapid growth for a few decades with oil from their basin. But since 2015 they have had great difficulties due to the drastic reduction in income from royalties and special participations as crude production fell. The basin once accounted for about 80% of all oil production in the country. Today, it produces 40%. In 2011, production reached 1.9 million barrels per day. In 2019, it fell to 1.1 million barrels a day.

“It is a sad scene. Macaé and Campos are dead cities. Rio das Ostras, the dormitory town for these workers, is suffering from this crisis and is also a dead city, ”explains Wilson, who lives with his wife Márcia and their children in Barra de São João, a neighborhood in the municipality of Casimiro de Abreu, a about 50 kilometers from Macaé.

Wilson says that he was recently in Macaé and saw one of these buildings empty. “An entire building that Petrobras rented was closed and the jobs disappeared. It is a 10-story building without a soul. Only the contractors were relocated, the contract workers were laid off. There are many unemployed people, there were days when 2,000 workers met in the yard and were informed that from that day on they were laid off, ”says the retired oil worker.

Between formal and informal jobs, 55,942 jobs have been cut in Macaé and Campos between 2014 and 2018, as reported by the Brazilian Institute of Geography and Statistics (IBGE). The loss of places corresponds to 20.7% of the personnel employed in the two municipalities. The contingent of workers has gone from 270,377 to 214,435. Campos has an estimated population of 511,000. Macaé has 261,000. Unemployment has spread to other sectors of the economy. In commerce and services, from 2015 to 2019, Campos and Macaé have lost 21,143 formal jobs, according to the General Register of Employees and Unemployed (Caged).

A study of Intersindical Department of Statistics and Socioeconomic Studies (Dieese) Based on the annual report and the Petrobras business plan for 2019, it shows that investment in the Campos Basin fell by 64% between 2013 and 2019 and went from 9,000 million dollars to 3,200 million. “They are selling everything in the Campos Basin, taking advantage of the pandemic, even in some areas with pre-salt oil,” says Bezerra, from Sindipetro-NF. For the union leader, the indications point to the state company leaving the Campos basin.

In a mail message, Petrobras deepwater executive manager Carlos José Travassos denies that the state company is going to leave the basin. “The sale of assets does not mean a movement out of Petrobras from the Campos Basin. The Campos basin will receive investments worth 13,000 million dollars in the next five years, with a focus on strategic projects to maintain the sustainability of our oil and gas production, ”he clarifies. He affirms that the basin continues to have “a relevant role in the business strategy”, with investment and revitalization plans and that the company “divests in certain assets to invest in those that will bring it more profitability”.

“The sale of assets represents for Petrobras the possibility of financing areas of higher performance and, at the same time, provides an opportunity for other companies to invest in the potential and, thus, extract more value from the assets sold. In this way, we are preparing the way for a new investment cycle in Brazil, more competitive and challenging for companies in the sector, ”says the executive.

Without a job in the environmental area, Vinícius started a university course in Geography and will graduate this year. His desire is to teach in public education, but the prospect is not good, because in the private sector there is no demand. “It’s frustrating. People are leaving the region, enrollment in the private sector is decreasing, they don’t need teachers, ”he explains. Vinícius now intends to do a master’s degree and a doctorate. “We hope for change, we cannot give up,” he says, “because hope is the last thing that dies.”