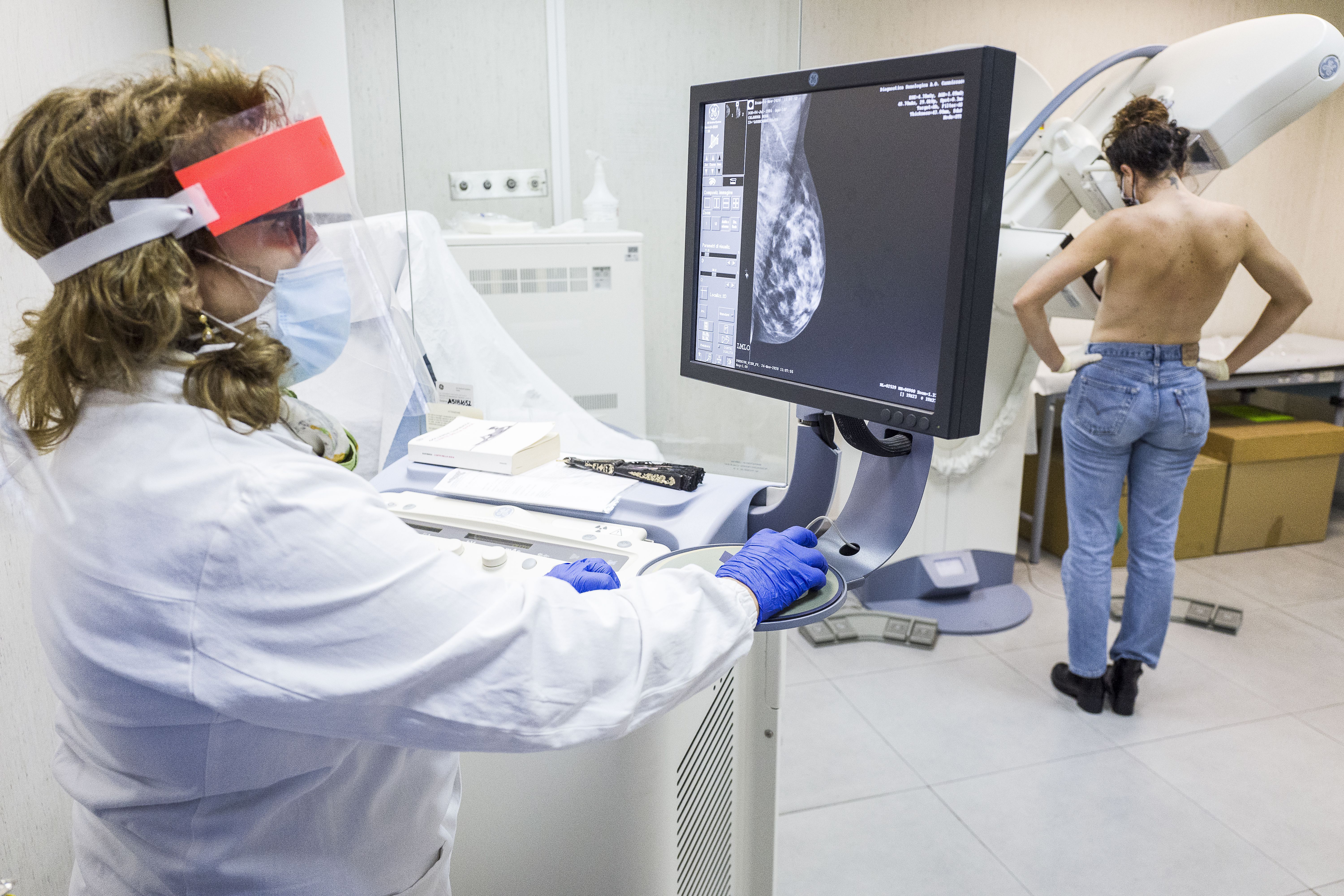 Lung cancer has been the most diagnosed of all for years, but statistics show that another type of tumor has just surpassed it in number of cases: breast cancer. With an estimate of 2.3 million diagnoses in 2020 (11.7% of the total) according to a recent report from the WHO, it has just become the most common cancer in the world.

That it is the cancer with the highest incidence is mainly due to “a conjunction of various factors”, as pointed out by Álvaro Rodríguez-Lescure, president of the Spanish Society of Medical Oncology (SEOM) and head of the Medical Oncology Service of the General University Hospital of Elche. Among them, the doctor highlights, on the one hand, “a greater diagnosis by population screening techniques”, and on the other, social factors such as the aging of the population, delayed maternity, less breastfeeding, not having offspring, taking the contraceptive pill, having the first menstruation at an early age, and a later menopause. Also “obesity, sedentary lifestyle, alcohol consumption and inadequate diets” have played a relevant role.

As most of these risk factors have historically occurred in developed countries, the incidence in them has also been higher. However, the recent WHO report points out that the incidence “is growing rapidly in South America, Africa and Asia, as well as in Japan and South Korea”, regions where it has traditionally been low. Social changes such as the incorporation of these women into the world of work, which forces them to delay pregnancy, or in lifestyle, such as a reduction in physical activity, make, according to the authors, women in these countries have a profile increasingly similar to that of Westerners, so the morbidity figures from breast cancer also tend to equalize.

The good news is that mortality figures are getting lower and lower: in our country, the overall survival rate is 85.5% five years after the diagnosis of this tumor

In Spain, it is estimated that one in 8 women will suffer from breast cancer throughout her life. The good news is that mortality figures are getting lower and lower: in our country, the overall survival rate is 85.5% five years after the diagnosis of this tumor, according to the AECC (Spanish Association Against Cancer) . These very positive data are largely due to the immense effort that the scientific community puts into better understanding and treating the disease: according to AECC data, breast cancer is, by far, the type of cancer that generates the most clinical trials.

Most studies are mainly focused on improving treatments, which vary mainly depending on the subtype of breast cancer. Three types of tumors are differentiated according to whether or not they express the estrogen, progesterone and / or HER2 receptors. Cristina Saura, head of the breast cancer unit of the Department of Medical Oncology of the Vall d’Hebron University Hospital (VHIO) and principal investigator of the breast cancer and melanoma group of the hospital, explains: “The most frequent subgroup is the tumor. luminal, which expresses estrogen or progesterone receptors. It represents 70% of the tumors that are diagnosed ”.

The great revolution in the treatment of these tumors came only a few years ago, with the approval of cell cycle inhibitors – the popular palbociclib, ribociclib, and abemaciclib – which are part of what are known as “targeted therapies.” In the case of these inhibitors, they prevent the proliferation of cells and thus reduce the progression of the disease, which “has allowed a lasting control of the disease in advanced stages, as well as a greater survival of the patients, and a delay in addition in the use of chemotherapy, with the consequent benefit in quality of life ”, indicates Rodríguez-Lescure. Currently they are also being tested “in the initial stages” of the disease, says Saura, to see to what extent they are also effective in preventing relapses of the disease.

The second type of tumor by frequency is the HER2-positive subgroup that, regardless of whether it expresses the estrogen or progesterone receptors, overexpresses HER2. These tumors, which affect 15% of patients, tend to grow faster than the others, and are usually treated, in addition to chemotherapy, with drugs that block this protein.

The great revolution in the treatment of these tumors came just a few years ago, with the approval of cell cycle inhibitors, which are part of what are known as “targeted therapies”

Antibodies have been used historically for this, but in recent years the potential of immunoconjugate drugs (ADC), a kind of chemotherapies that are given together with an antibody that recognizes HER2, has been investigated. This allows the treatment to be released into the tumor cells instead of into the blood, which means that “we can use more doses of chemotherapy while being less toxic,” says Saura.

Although this type of drug has been approved for some years for cases of HER2-positive tumors, such as T-DM1, “another has been found, trastuzumab-deruxtecan, which uses this technology, but is much more active,” says Saura. In fact, this new treatment has recently been approved by the European Medicines Agency, “And we are waiting for it to arrive soon in Spain.” Along with this there is another very promising drug, tucatinib, a HER2 inhibitor that has shown “a benefit in disease control and survival of patients with brain disease”, and for which doctors are “very excited”, he concludes Saura.

The last tumor subgroup is triple negative, which is so named because it does not overexpress any of the three receptors. It affects 10% of patients, but it is the one that generates the most concern among the scientific community because it is associated with lower survival — in advanced stages, less than 15% of patients survive beyond 5 years. It also has a smaller therapeutic arsenal: “We urgently need new effective treatment options for our patients,” says Rodríguez-Lescure.

The newest thing in this area is curiously immunotherapy, which although in breast cancer in general does not seem to be as effective as in other tumors, it seems to be showing good results both in metastatic patients and in those with early disease.

Of all the challenges that breast cancer has to face, the doctors consulted consider that improving early detection is the most urgent: “We should be able to diagnose tumors earlier, because we know that the opportunity to cure patients is when the disease is diagnosed localized ”, urges Saura.

For now, the main form of early cancer detection to date continues to be mammography, which, according to Rodríguez-Lescure, “has been shown to reduce mortality by up to 40% in women aged 50 to 69 years.” However, in recent years the efficacy of this diagnostic test has been questioned, and all experts agree that the reduction in mortality it produces is, in any case, insufficient.

For this reason, science also invests time and money in seeking an effective screening test, not only for the general population, but above all and especially for patients who have already passed the disease: “We have been doing the same thing we did 20 years, which is that the patient, after surgery, undergoes a mammogram every three or six months, and if said relapse appears, we treat it “, says Miguel Ángel Quintela, head of the Breast Cancer Clinical Research Unit of the National Center of Oncological Research (CNIO). “However, by the time the doctors detect it, we are already acting late: the tumor has already grown a lot and has spread,” laments the expert.

Of all the challenges that breast cancer has to face, the doctors consulted consider that improving early detection is the most urgent

To get there earlier, the great promise is the liquid biopsy, a blood test that seeks to detect mutant cancer genes before it is visible by other means. “There is already data that shows that the patients in whom this mutated DNA begins to be detected are on the verge of relapse,” says Quintela.

The problem with the liquid biopsy is that it is not yet sensitive enough, which means that many patients continue to relapse without any evidence of tumor DNA being detected in the test. Even so, doctors are optimistic about the development of the technique, and they anticipate that little by little its sensitivity will increase. “This will make it possible to detect this tumor DNA in the vast majority of patients,” concludes the expert.