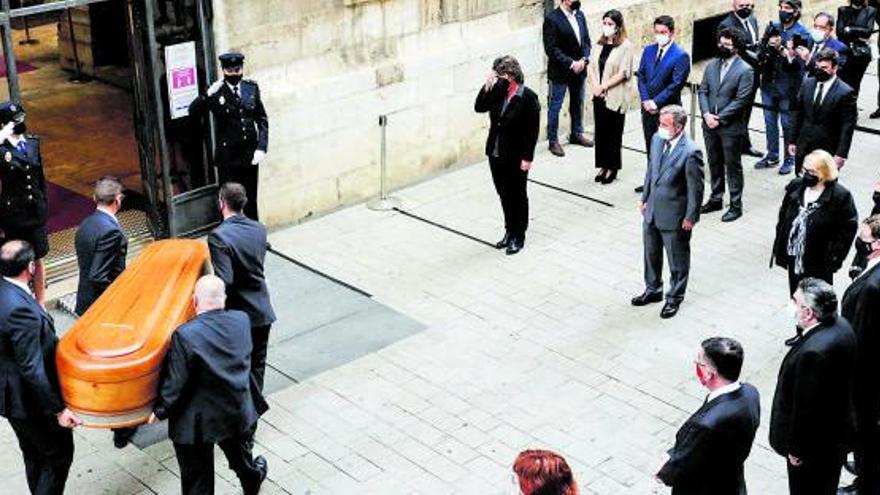 The family and the members of the Francisco Brines Foundation were the last to say goodbye to the only Valencian writer to be awarded the Cervantes Prize. In the morning he received a solemn tribute at the Palau de la Generalitat, where authorities, friends, acquaintances and admirers once again listened to his verses and saw him in one of his latest recordings.

“From the feeling, affection and sadness, we want to say that life is a parenthesis between two things, but Brines has not left us nothing, but a common space of love, tenderness, feeling and passion for life,” said the president of the Generalitat, Ximo Puig. The Minister of Culture, José Manuel Rodríguez Uribes, for his part, stressed that institutions must recognize “the men and women who sow intelligence and beauty,” as the author of Las brasas did.

The coffin of the poet de l’Elca arrived at the Palau after nine in the morning. Puig, Rodríguez Uribes, the President of the Corts, Enric Morera, the Government delegate, Gloria Calero, the Mayor of Oliva, David González and his niece Mariona Brines were waiting for him at the door of Calle Cavallers.

The coffin was placed in the center of the Pati Gòtic, while the rhapsodies Vicent Camps and Lola Camps recited the poet’s verses accompanied by the cello music of Gloria Aleza and the guitar of Miquel Pérez Perelló. An intense poetic offering that provoked emotions as the coffin was moved to the Saló Daurat where it remained all morning.

A red rose expressly brought from l’Elca, his fountain pen and the paper on which he wrote his farewell at the Gandia hospital hours before he died was placed on top of the coffin: “I love you.” Next to it was the case with the Cervantes Prize medal that Felipe VI hung on him on May 12 – which he did not take off all day – and the sculpture accrediting the best award in Hispanic literature.

One of the first to enter was the poet Marc Granell, who recalled his “very deep” friendship with Brines. “For the people of my generation, he has been a teacher of poetry for his poems, but also a teacher of life and love for life and for others,” he said.

The writer Fernando Delgado, who was already in the intimate homage of his friends in l’Elca, evoked how “his poetry has been tremendously related to the sea of ​​Oliva and València.” The poets Vicente Gallego and Juan Antonio Zapater also passed through the burning chapel. And his friends José Antonio Cañada and Esperanza Blasco, who shared many trips with him for 20 years and who hospitalized a day after receiving the Cervantes prevented them from celebrating the meeting they had planned.

Manuel Borrás, the editor of Pre-Textos and friend of the poet; the restorer Pilar Roig, the actress Rosana Pastor; and her friend and neighbor in Valencia, María José Muñoz Peirats, spent several minutes with the poet at the Saló Daurat.

The majority of members of the Consell, the mayor Joan Ribó, the president of the Provincial Council, Toni Gaspar and the former president Joan Lerma signed the book of condolences. Like many admirers of Brines, despite the rain, they came to the Palau de la Generalitat to say goodbye to the vitalist poet.

After more than three hours in the Palau de la Generalitat, the body of Francisco Brines left for the General Cemetery of Valencia, where in a family ceremony he was buried in the pantheon where his parents are. A unique burial made by the sculptor Nassio Bayarri.

It was the last trip of the eternal Mediterranean poet.

posthumous tribute. Images of the farewell act to the Francisco Brines Cervantes Prize that the Consell organized yesterday at the Palau de la Generalitat. 1 The poet Marc Granell was one of the first to pass through the burning chapel installed until noon in the Saló Daurat.

2 President Ximo Puig signs the condolence book between the President of the Cortes Enric Morera and the Minister of Culture, José Manuel Rodríguez Uribes.

3 The poet’s niece, Mariona Brines, excited while listening to her uncle’s verses at the Pati Gòtic.

4 The pantheon of the Brines family in the General Cemetery where the eternal poet of l’Elca is buried.