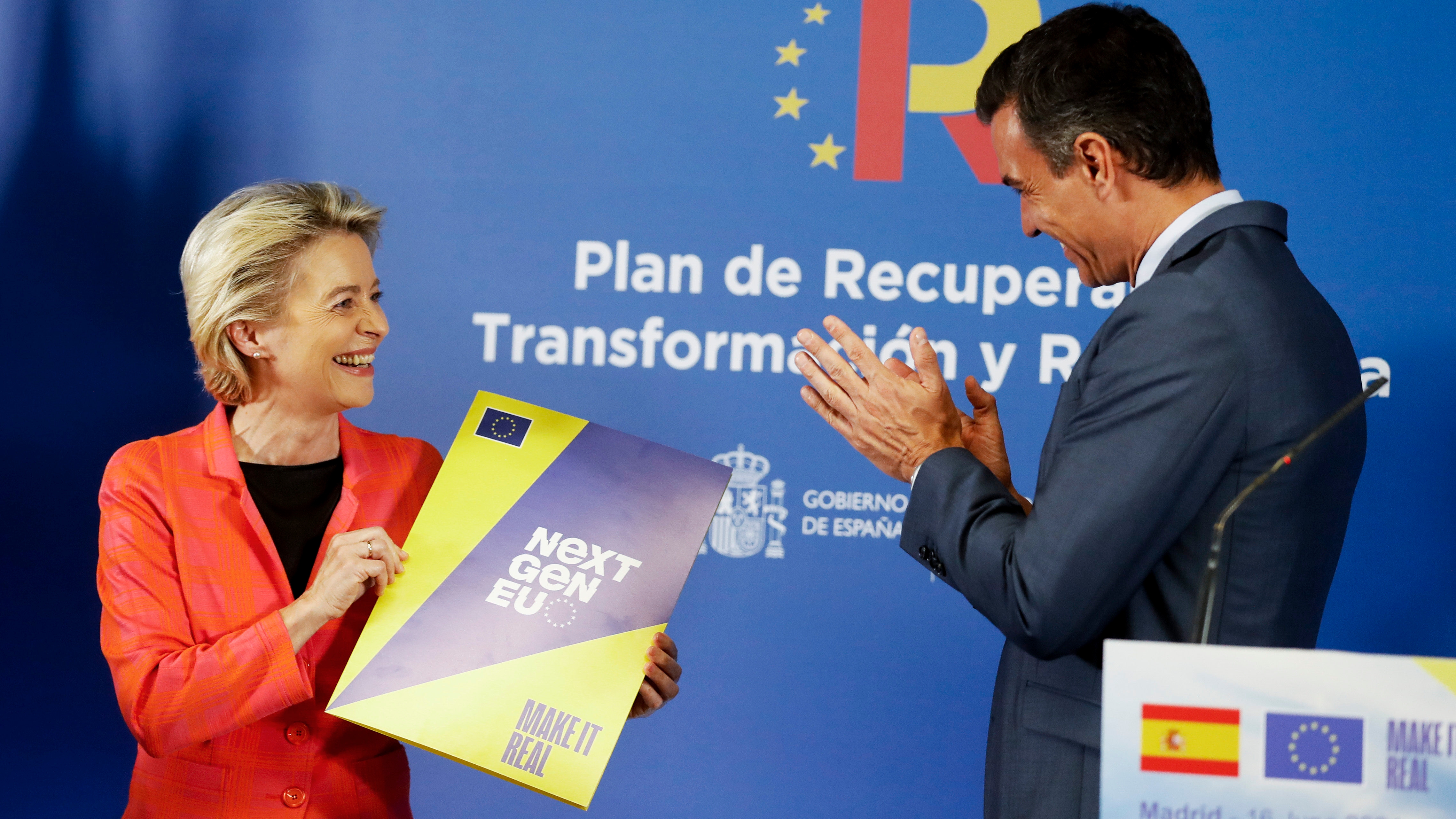 After a very tough year of pandemic, Brussels has approved this Wednesday the Spanish recovery plan that opens the door to receive up to 140,000 million euros. “This plan will profoundly transform the Spanish economy, making it greener, more digital and more resilient,” said the president of the European Commission, Ursula von der Leyen, who has traveled to Madrid to celebrate the news with President Pedro Sánchez. Von der Leyen has given him the document with the approval proposal, in a symbolic act at the headquarters of Red Eléctrica, a way to show that the focus is on the ecological transition. Both leaders have appealed to the unity of the political forces to carry out the plan.

The act with Von der Leyen was key for the Spanish Government, determined to show that it has done its homework and that it has the plan approved before anyone else. It has only tied with Portugal, the country that the president visited before traveling to Madrid. The European leader has always praised the Spanish plan and the reforms. And he has especially praised one of the most controversial, labor, because he believes that it focuses on improving access to employment for young people.

Both have asked all political forces to make an effort to agree on the reforms and thus be able to implement the plan. Sánchez has promised to convene a conference of regional presidents in July to discuss the plan and agree on its application. “It is the biggest reform drive in 40 years. I call on all political forces to support him. […] It is the great opportunity to modernize. There we are playing the future ”, has assured Sánchez.

Von der Leyen has also called for unity. “We Europeans have been through this horrible pandemic together. Now that things are starting to get on track, we need all the political groups to make the program a reality ”, he concluded.

The approval of the plan by Brussels does not mean the end of the exam. On the contrary: now another process begins in which the Government will have to execute 416 milestones and objectives to ensure the 69,500 million in subsidies and, if it ends up asking for them, as many millions in loans. Spain assumes that it has all the duties done to collect the first disbursement, in December 2021. From there, it will have to comply with the planned reforms and investments if it wants to receive the 18,000 million planned for next year.

Of the 140,000 million euros that Spain can receive, half will be direct transfers and the other part would come in the form of credits. Spain for now has only requested the direct aid tranche, but the economic vice president, Nadia Calviño, has advanced that she will also request the loans under advantageous conditions

The Community Executive concludes that the plan dedicates 40% of investments to the green economy, 28% to digitization and that it includes a “broad set of reforms and investments” that allows meeting the challenges set out in the recommendations made by Brussels. According to Sánchez himself, this year alone, 19,000 million euros will arrive to pay for investments and reforms. It is a lower figure than the 27,000 million budgeted by Spain for 2021 on account of this plan. Sánchez explained that the negotiation was not easy because there are 26 other states claiming their share and those 19,000 are “enough” for the first year. What will happen to the rest? Spain will assume it, as explained by the president. “We are talking about 6,000 or 7,000 million. It is perfectly acceptable for the Spanish Government ”, he concluded.

After some very tough negotiations in Brussels, the president of the Commission was especially interested in pointing out that the plan “has been designed in Spain”, to remove the idea that decisions are taken outside of Madrid. “There has been excellent cooperation with the Spanish authorities. There has been a very detailed analysis, it has been the hardest part, but it was necessary ”, he pointed out, looking at Sánchez with a smile. “The plan was developed in Spain. The Spanish are the owners of this growth. The reforms will make Spain emerge stronger ”, insisted the former German minister.

With this step, the European Commission approves a recovery plan that aims to boost and transform the economy in the next six years. The document will go to the Council of the EU, which has a month to examine it and decide by qualified majority if it supports it. The Union’s finance ministers will already be able to debate the first plans this Friday in Luxembourg, although they are not expected to go fully into those programs. Community sources indicated that the approval could take place on July 13. However, it will be a good opportunity for the Minister of Economy, Nadia Calviño, to take the pulse of her colleagues.

As an asset, Calviño counts on the fact that the Spanish program has been among the most advanced from the beginning, since it began to be negotiated last October. After evaluating it, Brussels considers that the plan exceeds the two objectives on green and digital investment and represents a “balanced response” to the economic and social situation in Spain.

“We have supported this plan because it is ambitious, forward-looking and will help build a better future for the Spanish,” said Von der Leyen in a statement. Brussels especially highlights the reforms tied in the main areas addressed in the recommendations made by the Commission: the business climate, through actions on insolvency legislation; public finances, with a tax reform; the pension system, with changes that seek to preserve its sustainability in the medium and long term, the design of which the Community Executive emphasizes that they will depend on the result of social dialogue, or the labor market.

The Commission made its first debt issue on Tuesday, the largest in the history of the EU, worth € 20 billion. In total, Brussels will ask the markets for up to 800,000 million euros between now and 2026, becoming one of the largest players in the global debt market. These funds will make it possible to give pre-financing to the countries whose plans it will approve. In the case of Spain, before August it could already receive 9,000 million. The remaining 10,000 million will arrive in December on account of the investments and reforms carried out until this Wednesday.