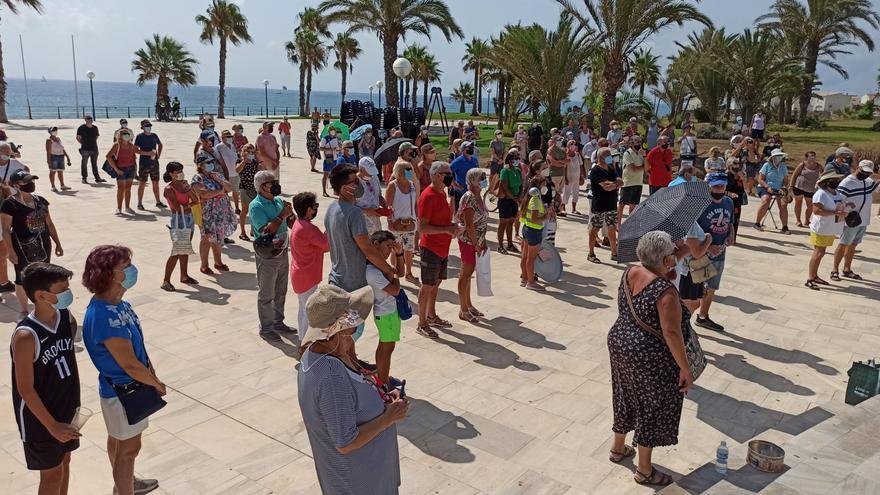 It is not the first time that residents of Orihuela Costa take to the streets to lament what they consider to be abandonment by a government that is thirty kilometers away. Nor will it be the last. More than two hundred residents of Orihuela Costa they have starred this Thursday a protest with a saucepan to demand that the City Council cover the minimum public services and provide some basic infrastructure that this area of ​​the Oriolano coast lacks, in which 30,000 residents reside permanently and triple during the summer months.

The concentration has been called by the Orihuela Costa in Action Association (AVOCA) and it has been supported by another 11 more neighborhood groups and associations. It coincided with the celebration of the ordinary plenary session and with it they wanted to express his “boredom and indignation” with a long list of unsolved problems for years and the grievance, which they assure, occurs within an area of ​​the municipal term that receives much less than what it contributes to the municipal budget.

The concentration has had to modify its initial location of the Oriolano City Council headquarters in Flamenco Beach to the Plaza de Cala La Mosca by indication of the Local Police, when the organizers made a forecast of attendance greater than the one initially indicated by one hundred people -and that in the end has doubled-. The change has been notified at the last minute so most of those summoned have appeared at the Town Hall headquarters although they have been later escorted by the Local Police to the new location.

Tomás Moreno, president of AVOCA, has read a manifesto in which he has assured that the residents of Orihuela Costa, in the opinion of the organizers, “have suffered the same problems for many years, but increasingly more serious” and in summer “the deficiencies are further aggravated and they affect not only the residents but also the tourism that visits us, and that we run the risk of losing as a result of the situation we suffer. ”

The motto of the most repeated concentration this Thursday It has been “Enough already” and “We want services, we pay taxes”, accompanied by banners denouncing the “abandonment” of the coastline and some allusion to the segregation of the rest of Orihuela.

The main criticisms have been directed against the mayor Emilio Bascuñana which today the neighbors accused of appearing in Orihuela Costa “just to take a picture” and to whom they attribute the absence of a municipal library and a cultural center that allows “to have a meeting place where associations, young people, retirees, and other groups can meet to develop a series of hobbies and cultural events.” The main social and sometimes cultural meeting area, although by private initiative, is the La Zenia shopping center.

An abandonment that is also symbolic because although cultural activities and other councils have increased in recent years, for example, no one remembers on the coast if on some occasion the City Council has moved a plenary session to Orihuela Costa -since that began the pandemic are still telematics.

They also reproach Bascuñana for the lack of resolution of a particularly controversial issue. And it is that after more than 12 years and, “despite their repeated unfulfilled commitments, the pedestrian unfolding of the bridge over the AP7 continues without being done, condemning the residents of Lomas de Cabo Roig to risk their lives crossing the bridge every day” .

The associations have once again reproached the first mayor that in recent years the Oriolano City Council has received more than 20 million euros from the sale of plots on the coast but mp “they have served to improve and renew our obsolete infrastructures” on the Coast , while the plenary session has just approved an investment of 10 million euros with EDUSI funds from the European Union destined exclusively for projects in Orihuela City.

Neighborhood groups have also reminded that if it carries out the construction of more than 2,000 homes in Cala Mosca, “our infrastructures will be even more insufficient than at present, if they do not remedy it by acting urgently. Because of the more than 20 million of remnants, a single euro has not yet been destined to the coast “.

Posted by Information about Vega Baja on Thursday, July 29, 2021

With their casserole the neighbors have reproached the councilorl Dámaso Aparicio his “fed up and indignation” at the state that, in his opinion, the streets are “dirty, with the pavement impregnated with leachate and old and broken containers, with garbage around”. Also the presence of pruning and belongings that “remain for weeks in the streets, pending collection, as a result of the deficiencies of the service, the lack of an eco-park, citizen incivism and the lack of police control.”

In the same tone, they have expressed themselves on the management of the councill Angel Noguera due to the lack of maintenance of public roads due to “the huge bushes of brush and weeds that are in our streets and the palm trees without pruning”, the deficiencies in the obsolete public lighting network that cries out for a renovation, the “floods recurrent problems that we suffer from not implementing the Rainfall Plan with more agility or the lack of repair, despite the time that has elapsed, of the coastal cliffs, which suffer collapses in many areas, due to lack of maintenance, being the maximum exponent the La Caleta sinkhole, which is almost 2 years old and threatens to collapse part of the walk. we suffer in the houses and in the vehicles parked in the street, the absence, in his opinion, “of control and sanctions of the antiviral conducts and episodes of vandalism or” the serious deficiencies of some roundabouts outside standards and horizontal and vertical signage, which pose a serious risk to road safety “.

They have also questioned the lack of a “minimally acceptable public transport, which connects all the urbanizations of the coast with the health center and hospital: and the urbanizations with the beaches” or the absence of a promotion of an economic activity other than residential tourism , with the creation, for example, of an industrial estate, “which would serve as a complement to the current model.”

In addition to the neighbors, many of them of British origin, a large group of members of the Orihuela Costa Party (Claro) has attended.

Vox militants have also been seen in this area of ​​the municipality accompanied by the national deputy of this formation, the Oriolano from La Murada, Manuel Mestre.