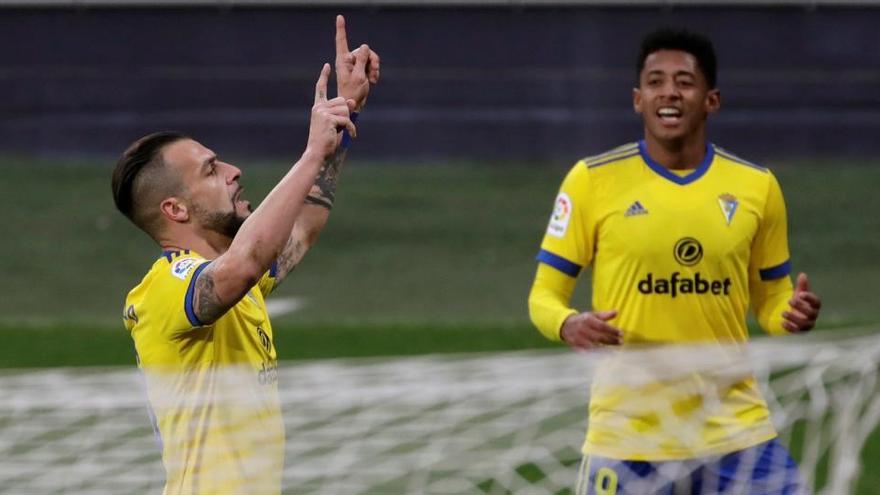 He Cádiz he won again a month later and defeated Alavés 3-1, which was inferior since he stayed with ten players at the start of the second half for the expulsion of Alberto Rodríguez ‘Tachi’, which the locals took advantage of with the goals of the Honduran ‘Chocho’ Lozano and Alvaro Negredo after the 1-1 with which he came to rest.

After this result, Cádiz adds 23 points in the standings away from the relegation zone, from which Alavés, who has 18, is trying to break away.

Cádiz presented the novelty of midfielder Alberto Perea in the starting line-up to replace Jairo Izquierdo, while in Vitoria, Pablo Machín made five changes with respect to the last line-up, highlighting the presence of central Tachi instead of the sanctioned Víctor Laguardia, in addition by José Luis Mato ‘Joselu’ reinforcing the lead.

Cádiz came out with force, who had two approaches in the first minutes by Álvaro Negredo, one offside and the second in a header from a lateral free kick that was stopped by goalkeeper Fernando Pacheco (m.6).

In minute 14, Cádiz went ahead with a goal from Álex Fernández, which ended in goal after a good move by Alberto Perea, an action that was reviewed by the VAR for possible offside, which finally the referee team did not consider punishable.

Shortly after the Alavés tied, after a penalty by Rafael Giménez ‘Fali’ on Tachi that Joselu transformed (m.23).

As a result of the 1-1, Cádiz barricaded themselves behind, looking for theft and quick exits, while Alavés dedicated themselves to touching the ball with the intention of finding a free way forward.

As soon as the second half started, Alavés were left with ten players due to the expulsion of Tachi, who saw the second yellow card for a tackle on the Honduran Anthony ‘Choco’ Lozano (m.49).

Cádiz took advantage of the numerical superiority in a gallop by Uruguayan Luis Alfonso Espino down the left wing, with service at the near post so that Lozano finished first from goal, putting his team ahead (m.55).

The game was broken and Lozano had another chance at 60 minutes, sending a good ball out.

Luis Rioja stood alone in one against Alavés and sent to the stick what could be the tie (m.63), but another counterattack move was scored by Cádiz, after a deepening of Lozano that Negredo culminated andn a service behind the Honduran (m.68).

In the final stretch, Cádiz was able to increase the advantage with a shot from Negredo that ended with the ball repelled by the post in what could be the fourth goal for the locals.

Referee: José María Sánchez Martínez (Murcian Committee). He expelled the visitor Tachi for an entry on the Honduran Lozano (m.49). In addition, he admonished the Cádiz coach, Álvaro Cervera, the Alavés players Pina and Deyverson and the local Fali with yellow cardboard.

Incidents: Match of the eighteenth day of LaLiga Santander played at the Ramón de Carranza stadium. No audience. A minute’s silence was observed in memory of former Cádiz player Marcelo García Robles.