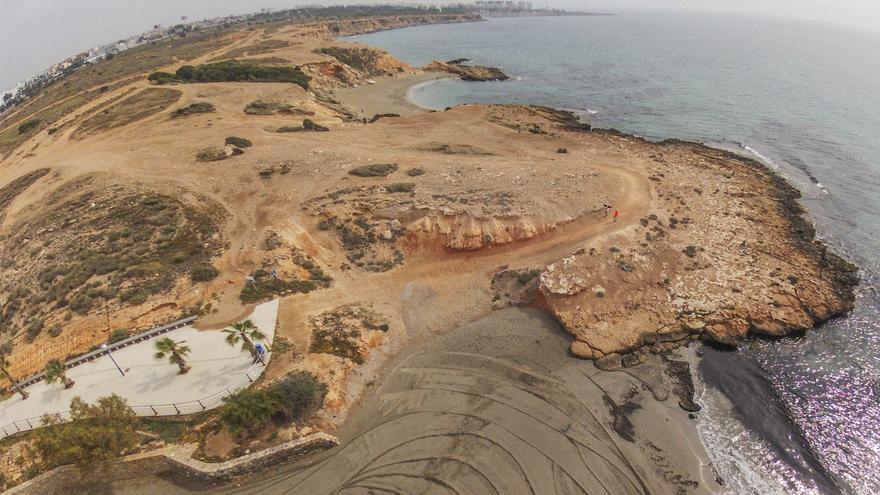 Ecologists in Action highlights the urbanization of the last virgin kilometer of the municipality of Orihuela, with el Partial Plan and urbanization project of the EU-2 of sector D-1 “Alameda del Mar” of the PGOU of Orihuela. Cala Mosca, highlights the organization, has great environmental and landscape values, endangered by the construction of hundreds of houses that hangs over it. Sector D-1 Cala Mosca y la Campana was declared developable in the 1990 PGOU and was not submitted to an environmental evaluation. In 1998, the Partial Plan for this sector was definitively approved and in 2003 Execution Unit 1 was urbanized. In 2005 the EU-2 PAI was processed, and in 2007 the PAI was approved and the program was awarded to the commercial Playa Salvaje SA During the development of the urbanization works, the presence of threatened and protected flora and fauna was detected in the sector, especially the plant Heliantemum caputfelis (Cat-headed Jarilla) and the gastropod Tudorella mauretanica (a snail). In 2012, the Department of the Environment decided to environmentally evaluate the Urbanization Project and forced the promoter to redo it, since the one that was already approved in 2007 did not take into account the existence of threatened flora and fauna.

Protest banners highlighting the presence of the Jarilla and the snail in Cala Mosca. Tony Sevilla

In 2014, Ecologistas en Acción presented a document of allegations specifying that the environmental legislation applied in the Environmental Impact Study (EIA) was repealed and compliance with some of the determinations of the current Law 21/2013 on Evaluation was not observed. Environmental. The environmental organization considered that there was a wrong assessment of the impacts of the urban project on the populations of threatened flora and fauna and recalled that the population of Jarilla Cabeza de Gato in said sector was one of the best preserved and with the largest number of specimens, together with those existing in the Micro-Reserve of Flora of the Punta de la Glea. Another alleged deficiency was the damage to an existing Livestock Road that crosses the sector parallel to the coastline and that legally could not be integrated into the area of ​​the sector. The EIA omitted the existence of this Via Pecuaria.

The environmental organization highlights that, at present, the project has been reactivated with the citizen opposition and some political parties such as Cambiemos and CLARO, who denounce that the Town Planning area of ​​the City Council is not requiring all the relevant reports to that the timely modification of this partial plan for the improvement of sector D.1 “Alameda del Mar” can be fully approved, which provides for the construction of 1,500 homes in Cala Mosca on 456,000 square meters. According to Ecologists in Action in the report“It seems that Urban Planning reports have been prepared on planning for the partial modification”, which is denounced as an interest on the part of the government team of PP and Cs to speed up the procedures so that it is presented in full as soon as possible.

In the Environmental Impact Statement (DIA) -favorable- it was already indicated that the urban development agent had to correct a series of aspects, such as eliminating some roads, preparing a study of threatened species, and the plant restoration of the areas that were freed from pedestrian traffic, among others. It also indicated that the modifications to the urbanization project required the modification of the detailed management of the sector and, therefore, the specific modification of the Partial Plan. It established as conditions for the approval and execution of the urbanization project the availability of water resources to meet the demand, the sufficiency of the current wastewater treatment infrastructures to guarantee adequate evacuation and treatment, and the sufficiency of the collection and treatment infrastructures. management of urban solid waste. The latest setback suffered by the mercantile Recommendation, promoter of the urbanization project, is the issuance of a report from the General Directorate of Roads in which it determines as unfavorable the construction of this project. As revealed by Cambiemos, the promoter submitted a letter to the City Council urging it “not to take into account the road report” which would indicate that the promoter, according to Ecologists in Action, “It is pressuring the City Council to ignore a devastating report that prevents the licensing of work as the project is”.

From the environmental organization they propose to the Orihuela City Council, based on all the irregularities that have arisen in the administrative process, to reject the approval of the urbanization initiative from the only virgin area of ​​the Orihuela coastline. “It is clear that the process of urban saturation of the coastline is negative from the environmental point of view, but it is also negative for the citizens of Orihuela, who are going to lose forever one of the few places for recreation and enjoyment of the coastline” , they regret from Ecologists in Action, which gives a hard setback by granting the black flag to Cala Mosca and placing it next to other 47 beaches “to avoid” on the Spanish coast. The Cala Mosca area has two beaches, one of them recently enabled for dogs, and which is being a success of assistance. The beach for dogs is the closest to the space in which the construction of 1,500 homes is planned. Orihuela Costa already has a high saturation of residential homes.

The distinctive Black flag has been taken by two beaches for each province with a coastline, plus Ceuta and Melilla. In the case of the province of Alicante, in addition to Cala Mosca, the Bay of Xàbia has been worthy of it, this time due to contamination.