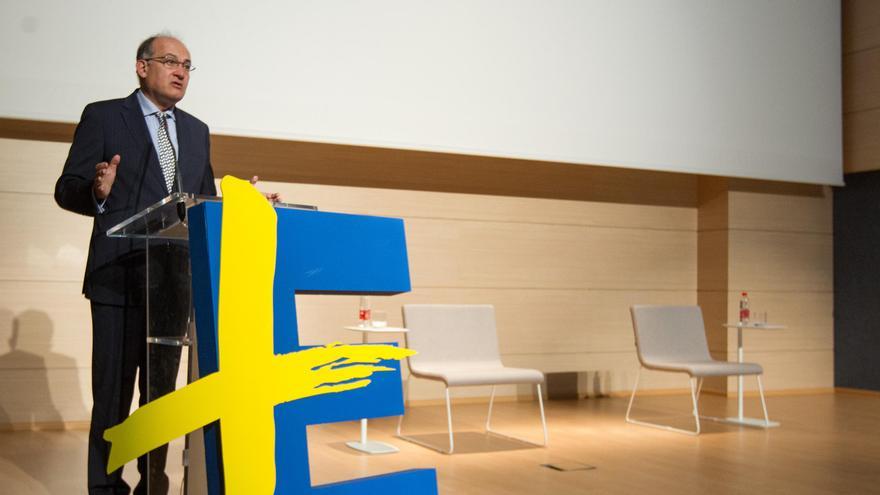 “We are in a transformation time, not only essential, but inevitable to face the challenges of the future “, has warned this morning Joan Calabuig, regional secretary for the European Union and External Relations, in the presentation of his presentation on European funds at the Forum + Europe, organized by INFORMATION and Casa Mediterráneo, and in which the Alicante Chamber of Commerce; the Generalitat Valenciana; the Euipo (Intellectual Property Office of the European Union); and the Miguel Hernández University (UMH) of Elche.

In the last edition of this year 2020 of the Forum + Europe, Calabuig titled his conference “European funds, the beginning of a new time”. A forecast of which he has been very convinced, after the significant amount of funds allocated by the EU for the reconstruction and transformation of the community territory (750,000 million). “A ‘mountain of millions’ that will not only help us to get out of the crisis, but also to come out reinforced”, Has indicated the regional secretary for the EU.

His presentation took on special validity today, since after a long negotiation, finally, yesterday the long-awaited agreement was reached to approve the European funds, after meetings with representatives of Poland and Hungary that they had vetoed funds, which was a serious threat so that the EU’s anti-crisis plan could be launched.

The expert on Europe, not in vain was a MEP of the Socialist Group in the European Parliament, has repeatedly reiterated the “opportunity” that the arrival of EU funds for the transformation of our sectors, including the traditional ones of the province, as well as SMEs to advance in digitization, energy and resilience (ability to overcome adverse situations). The latter is one of the three keys on which the European Community is based and which is mainly focused on avoiding the destruction of the business fabric.

During his speech, Calabuig stressed that within this important support provided by European funds, the tourism sector and the hospitality industry “are key points in the reconstruction plans”. In this sense, the regional secretary for the EU recalled that there have been two of the sectors most affected by the covid-19 crisis, “and, especially, in Alicante, where they have great weight in the economy”.

He has also alluded to the fact that its transformation should focus on the pillars of the European plan, such as the digitization and green energy, because for Calabuig, the projects “are a good opportunity to transform. But we are not talking about a recovery with reference to the day before the pandemic, but looking ahead, “he warned.

Calabuig has developed his presentation in the assembly hall of the Club INFORMATION, with face-to-face assistance limited by capacity due to covid-measures, at the same time as there has been telematic assistance. The conference was moderated by the director of the Club INFORMATION, Toni Cabot, and the presentation of the speaker has been in charge of the vice-rector of International Relations of the UMH, Vicente Micol, who has highlighted the role of universities in the process of cohesion in Europe, through transnational cooperation in many research projects with different EU universities. Among the attendees were politicians from Alicante, as well as provincial and local authorities.

The rapporteur has also reiterated several times that for the Community and for Alicante the arrival of the European funds will also be an important moment. In addition, he stressed that The Valencian Community has already presented its plan, as has Spain. And after studying the national proposals, which include the regional ones, it will be known how much corresponds to each project. For Calabuig, it will be in spring when “the new time begins”. However, it has warned that “you have to make a great effort” to manage resources and has influenced that the Community must be prepared. In this sense, it has reported that both the Government and the Generalitat itself are preparing the necessary changes so that the procedures are more agile.

On the other hand, responding to a question about what amount Alicante may receive from the European reconstruction plan, the regional secretary has said that it is not yet known. But, also, it has emphasized that “more than seeing how much we have to do, we must reflect on how much we are capable of promoting this transformation process “. With that attitude, “we will get the funds.” In fact, he has assured that in the meetings they are holding with the sectors of the Community, “both the institutions and the companies are overturned and excited.” And he insisted that “what will come will depend on the will and what we let’s get involved in the change. ”

Given his long political experience and his knowledge of the European institutions, some of the questions posed by the telematics assistants concerned the Brexit negotiations. Although Calabuig has relied on an agreement, “even in the last minute”, Has admitted that the current situation is still open and that “the latest movements are worrying, since the EU has recalled that it has a contingency plan on mobility issues, such as air, road traffic or fishing “in case, finally, there is no pact and the United Kingdom leaves the European Union abruptly.