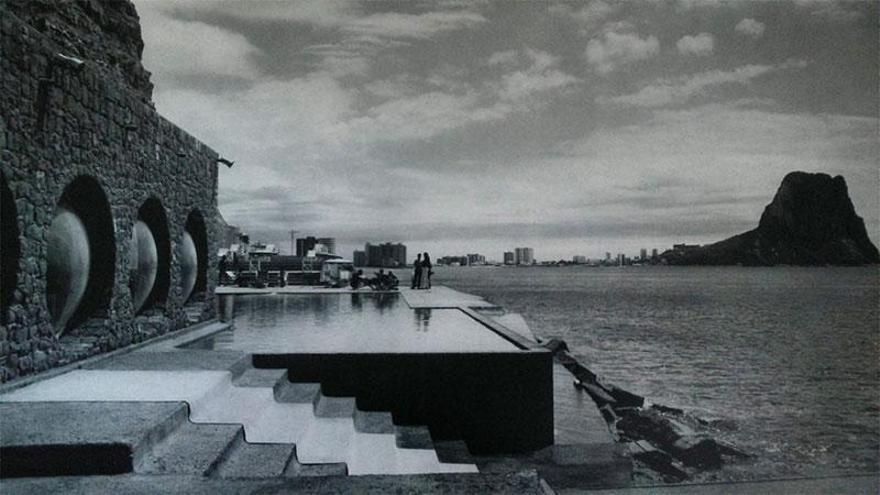 In 1962, the Ricardo Bofill Architecture Workshop began to design a master plan for a tourist complex in Calp, in front of the Rock of Ifach. The program itself was similar to that of other existing residential complexes in the spanish mediterranean coast but it started from the concept of landscape integration. They were commissioned to design and build in stages condominiums, apartments, single-family homes, a small hotel, bar, restaurants, and sports facilities. That project turned La Manzanera de Calp into a benchmark for urban planning integrated into the landscape.

Next to the well-known buildings The Red Wall, the Amphitheater or Xanadú, Bofill devised a recreational facility built in the 70s by the sea that housed a restaurant, a pool area and a small jetty. It was a singular space since it is located within the terrestrial public domain which was called La Manzanera Social Club. Its position exposed to marine action and long years of neglect have led it to a severely deteriorated condition.

For years the Calpe Town Hall try recover this emblematic place through various projects that have been modified at the request of other administrations in order to obtain the necessary authorization to undertake the rehabilitation works.

Thus, a few months ago the City Council modified the execution project for the coastal walkway and the breakwaters of the La Manzanera Social Club to avoid any environmental impact and approved that the works be carried out dry, without any intervention in the sea.

The objective of the City Council is recover the area respecting its original design and structure, its characteristic circular windows and its initial materials. Regarding the use of these facilities, the Ministry for the Ecological Transition has been asked for a concession, for the occupation of 1062 m² of maritime-terrestrial public domain for free public use cultural, scientific and educational.

From the City Council they point out that for the consistory “obtaining concession is paramount to be able to carry out the bidding for the rehabilitation works before their deterioration prevents any type of Recovery». The Social Club of La Manzanera is an emblematic place for Calpinos and Calpinas and its recovery would allow preserving the legacy of the architect Ricardo Bofill in the town.

Sala is proud that Calp has such a notorious architectural legacy known throughout the world.

I think we have not been aware of the legacy that Ricardo Bofill has left us in Calp until the tourists, film producers, renowned fashion brands or models to use as stage its iconic buildings such as the Red Wall, the Xanadu building, the Amphitheater, all of them being unique works. And of course, the La Manzanera social club, which is the subject of many photographs as it is in a privileged and idyllic enclave.

However, those who did not know the splendor of all these works are not able to see what this wonder meant for Calpins and tourists of the time. The architect Bofill is positioning us worldwide, not only as a tourist destination but also an architectural one, and we are very proud that he thought of Calp from the beginning.

Calp City Council has since 1997 requesting the concession of that space to then be able to allocate it at the municipal level for cultural or educational purposes. At first it was thought of as the headquarters of the University of Marine Sciences and later as a nautical station. However, the Department of the Environment pushed us back from the project because there is a protected species in the rocks of the sea, so we have had to redirect the plan renouncing the breakwaters. Now we are waiting for them to answer us to the new concession request to carry out the works, for whose project it is planned to allocate one million euros.

Immediately, the most important thing is to rehabilitate the building with the same materials and respecting the original structure of the 70s as Bofill devised it. Then it will be given a use and a maintenance so that it does not go into oblivion again.

next year they meet 50 years since the completion of the Red Wall and we see fit to render a tribute not only to the architectural complex but also to the figure of Bofill, and after hearing the news of his death with more reason is justified. Let’s create a special commissioner to work on the organization of all the commemorative acts and in the next plenary session in February we will take their approval and composition. In that February commissioner there will be members of the city council, technicians, we will invite professionals from the UA, the College of Architects, and even members of the Bofill family to participate. It will be a broad body so that everyone can participate. Ultimately, a Recognition of the legacy of Ricardo Bofill in Calp.