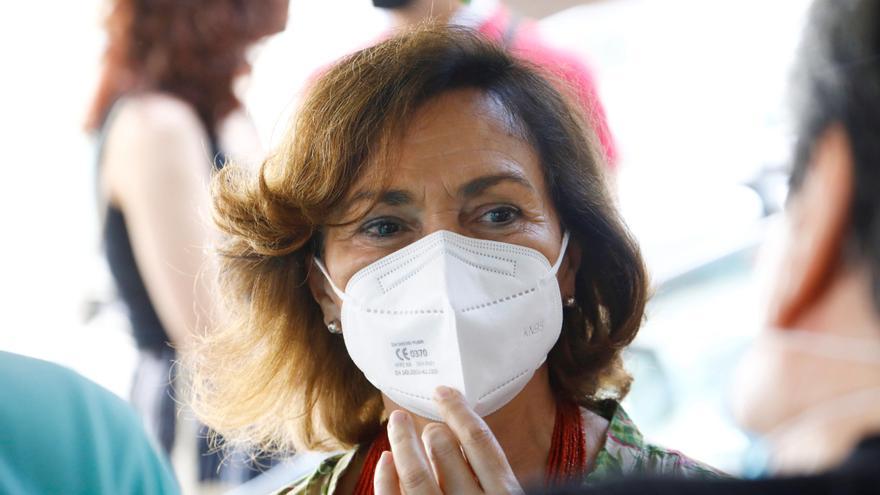 The First Vice President of the Government, Carmen Calvo, has affirmed that Colón’s is “the photo of the impotence of not having accepted the PP the arrival of the PSOE to power through the motion of censure which is, most fully, a democratic instrument “.

After voting in Córdoba in the PSOE-A primary process, Calvo pointed out to journalists that “the PP, instead of being in the Plaza de Colón, which had to be doing is a review of what he has done for ten years against Catalonia, what has made it so that it has practically no electoral support in Catalonia or the Basque Country at this time “.

For the vice president, Colón represents “the impotence of not having been in politics for ten years and of having done it with carelessness against Catalonia, in addition, evidently, of the immense responsibility of the independentistas when they tried to break our constitutional order and the territorial unity of the State “.

In his opinion, the PP has been dragged “by the far right and because of the situation of practically disappearance of Citizens to continue making a policy format that leads Spain nowhere. ”

Faced with this, Carmen Calvo, who has affirmed that the processing of pardons are in their final phase and will soon be on the table of the Council of Ministers, has defended that “” those of us who want Catalonia to be what it is at this time, an important part of the Spanish territory, have to look for common working formulas “, which, he specified,” is called meeting again in the democratic parameters, which are respect and dialogue “.

“The alternative to that does not exist and that is why being in the Plaza de Colón launching papier-mâché proclamations does not mean more that the impotence to do politics of the Spanish right, of the Spanish extreme right that does not quite understand the history of Spain or the recent events of which they should be apologizing at this time, “he asserted.

The vice president has wondered “What kind of alternative is a party that has no political position in either the Basque Country or Catalonia?, where there are almost seven million Spaniards “, to also ensure that” the PP has no alternative and since it is not an alternative for Spain, it goes to the Plaza de Colón to be under the empty and disturbing phrases of Santiago Abascal, which is who gives the precise orders to be in the situation in which they are at the moment “.

In any case, He has demanded that they be “cowards, not to fool the Spaniards, to take their picture because the three of them are there, but also to say something constructive for Catalonia and that he has a future and that he has hope for the rest of Spain, which obviously has to get out of this situation. ”

On the other hand, the secretary general of the socialist parliamentary group, Rafael Simancas, has demanded this Sunday from the PP an “exercise in patriotism” that places the general interest above partisan calculations, “and the interest of the Spanish is to solve the problem. problem of Catalonia “.

“We need less yelling and more loyalty, less rancor and more solidarity, less partisanship and more effort for the common good, “Simancas said in a statement at the PSOE headquarters in Ferraz, where he also asked the leader of the PP, Pablo Casado, to” reflect “on why today his barons “have left him alone” in the concentration of Colón, “only with the radical Ayuso.”

Simancas has reproached the right and the center-right that from Columbus they are promoting “discord, division and confrontation “when Spanish society,” today, more than ever, needs harmony, understanding and unity “.

The socialist leader has remarked that the interest of the Spanish does not go through “aggravating, exacerbating or exciting the problem in Catalonia” which, in his opinion, is what the protagonists of the Plaza de Colón are doing.

Simancas has regretted that the PP in the opposition is not acting with due loyalty and solidarity with the Government, and has accused them of returning to the confrontation with the issue of Catalonia, as when they collected signatures against the Statute, “for a merely selfish calculation.”

The secretary general of the Socialists in Congress has reproached the PP that its “radical drift and its complicity with the extreme right” is distancing it from the moderate right.

And he has considered that the path for the integration of Catalonia in Spain “does not pass through the Plaza de Colón”, it passes through unity and that is the roadmap proposed by Pedro Sánchez despite “the obstacles posed by the right.”