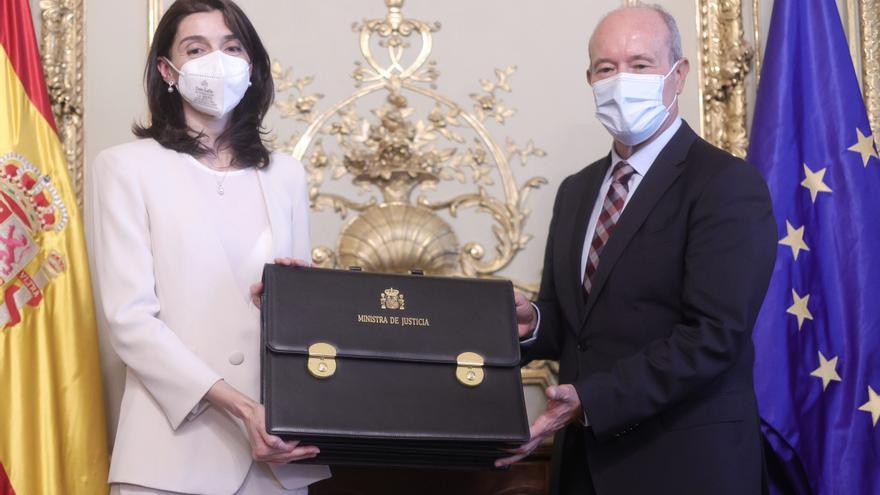 The former Minister of Justice, Juan Carlos Campo, has come up against the misgivings that his return to the National Court may generate after being dismissed by the Prime Minister Pedro Sánchez. In an interview with Europa Press, he stated that “Going back to the job you entered 34 years ago is neither pollution nor revolving door, it’s a return to your profession “.

According to Campo, his status as a former Minister of Justice will not pose any problem because in the Law itself establishes its obligation to abstain from all procedures “in which the parties or party representatives are involved.”, so the situation does not generate any problem. “And then there are the traditional mechanisms of abstention and recusal, they are mechanisms that are there,” he adds.

For the now active judge, the important thing is that the National Court, and specifically the Criminal Chamber of which he will be a part, It is a body in which decisions are taken collegially, “and there is no room for the influence of anyone except the legal one.”

“In that sense I have the absolute tranquility that I am not going to put tension on my colleagues or they on me, because we are aware that the law is very clear on this matter and there is no problem,” he adds, to emphasize that his place in the National Court is “purely ranked”, by contest in which it has agreed to be the oldest to request it.

According to Campo “we must send a message of tranquility” since Justice is strong enough so that your return does not involve any kind of disturbance. “There are very easy mechanisms of application to avoid not only the loss of impartiality but also the perception of that loss, which is an element to take care of,” he insists.

For this reason, he concludes that it is important to explain that “someone who has been in politics does not arrive contaminated” to a judicial body, and that what needs to be done is to structure a system for citizens to trust in independence. For his part, he affirms to have been received with “warmth” both by the president of the National Court and by the president of the Criminal Chamber, Concepción Espejel and the president of his section, Alfonso Guevara. “So everything is easy,” he says.

Asked about the reasons for his dismissal as Minister of Justice, Campo has assured that he does not know them. “What I have seen (is) the president’s demonstration in order to what is truly important: hitting the government with a change at a moment of momentum and reconstruction of the country, “he says, assuming that at this juncture Pedro Sánchez” understands that specific people are the ones who are best able to face the new challenge of the country. ”

In any case, he considers that “you do not have to worry too much” about the reasons, because from the moment you come to the government you have to be aware that “whoever has the competence grants confidence and, with the same legitimacy, withdraws it.” “I only have words of gratitude for the president,” says Campo, stressing that it has been “an honor” to have been part of the Executive. Pondering why it ends “can only lead to melancholy”, has settled.

Campo has also denied that he feels used because he was dismissed shortly after the proposal to forgive the prison sentence for those convicted of the independence process in Catalonia was brought to the Council of Ministers. “No, not at all (…). I insist, I only have words of appreciation for the president. I have never felt used at all,” he answered bluntly, adding that to process pardons requests made in favor of the inmates of the ‘procés’ “was an obligatory question” by law. “And now that this happens, I am not going to say that I have been used,” he added, estimating that he has done at all times what “responsibility” as Minister of Justice required of him.

Beyond defending the government’s decision to pardon the independence leaders, Campo has refused to rule on the possible effects of the grace measure. Given his new responsibilities as a judge in the Criminal Chamber of the National Court, he prefers to be “super cautious.”

“I only hope, yes, that a problem of coexistence is resolved, because that is what has been intended with the pardons,” he said, arguing that it is necessary to remove the “obstacles” that prevent dialogue, “the key to democracy. “.

Campo has emphasized that we are facing “a problem that is deeply political” but also a social problem because “it has Catalans facing off against Catalans and Catalans against the rest of Spaniards.” “I think a government has to try to overcome all these difficulties,” he claimed.

Questioned by the pending issue of the renewal of the General Council of the Judiciary (CGPJ), in office since December 2018, Campo has pointed out that in his day the only thing missing was “the courage of the PP in making public “, an agreement that had already been reached. And thus they have recognized it, has aimed.

For this reason, it trusts that the new ministers of Justice and the Presidency, Pilar Llop and Félix Bolaños, “move the obstacles” that prevent the agreement today. “I am concerned, also as an active judge, that the quality of democracies is measured by the solidity of their institutions, and I believe that we have to believe in institutions and their renewal when it comes down to it, is a way of strengthening our democracy that it is very full, but we cannot neglect it “, he adds.

Regarding the relationship with Podemos in the coalition government, Campo has limited himself to pointing out that the work to achieve laws such as “yes is yes”, “was complicated”, although “the important thing is the result, not the effort that was left on the road “, because the laws come out and are from a government. At this point, he affirms that he stays with the words that the former vice president Iglesias addressed to him when he left or those of the Minister of Equality when he was dismissed.

On the other hand, he has reviewed the projects that he has launched in the year and a half of his mandate, among which the new Criminal Procedure Law (LeCrim). He has been “convinced” that he will go ahead because the current “It has given an extraordinary result but it is 140 years old and I believe that the criminal process must be adjusted to the constitutional model”.

Questioned about the response to the new LeCrim in the Fiscal Council, despite the fact that it takes the instruction from the judges to give it to the prosecutors, he has played down it because “the moment of discrepancy is now.” Thus, he has predicted that “there will be tremendously interesting things that can improve the text”, stressing that the draft approved by the Government is only “the first word.”

What’s more, has predicted that both LeCrim and the laws of procedural, organizational and digital efficiency, which it defines as “pieces” of the “motherboard” to modernize Justice Through the 2030 plan, “they will have enormous support in the parliamentary arch” because “they are absolutely consensual norms.” “I hope they are laws that we see in the BOE,” he confided.

He also highlighted the collaboration of the Autonomous Communities, with which he unanimously approved the first distribution of EU funds. “It is necessary to feel, with humility, tremendously proud that we have done that. There has been a reciprocal sacrifice,” he valued. On the whole, he declares himself “very satisfied and very grateful”, although he is aware that “there is still a lot to do”.