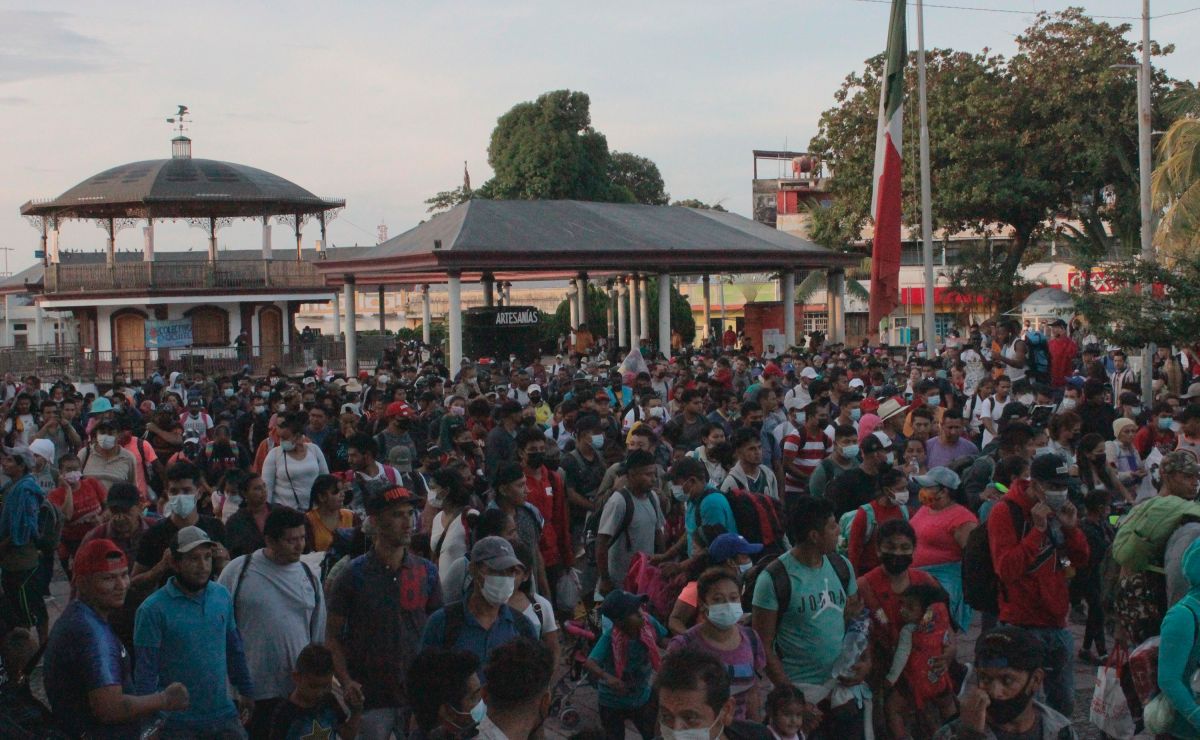 TAPACHULA, Mexico – A new caravan made up of about 6,000 migrants, mostly from Haiti, El Salvador, Honduras and Guatemala, left this Saturday from the Mexican city of Tapachula, in the southern state of Chiapas, bordering Guatemala, but now with a previous destination to the United States: Mexico City.

Travelers try to reach the Mexican capital to regularize their situation before the National Institute of Migration (INM), dependent on the Secretariat (ministry) of the Interior.

After several days of organizing to leave Tapachula, a city that in recent weeks has seen the unusual arrival of thousands of migrants from at least 11 countries, the caravan began its walk.

The huge contingent carried suitcases, backpacks, bags, water, strollers, umbrellas, in addition to the illusion and hope of being able to reach their destination and then try to enter the United States.

The migrant march “for freedom, dignity and peace” started this Saturday at 8:00 am (13:00 GMT) from the Bicentennial Park, in the city of Tapachula, and seeks to travel about 1,160 kilometers to the Mexican capital.

To the voice of “Yes, you can, yes you can!”, The contingent of migrants, among which there are also people from Venezuela, Cuba, Colombia, Costa Rica, Nicaragua, Peru, China and from some countries in Africa, he left the city and traveled his first kilometers on the highway that is practically on the coast of Chiapas.

Salvadoran Isaac Andrés told Efe that the INM is not letting them leave Chiapas despite the fact that they have documents and, although they have been working in Tapachula, opportunities are few or nonexistent.

“We are civilized people and we want to fulfill our dreams, we are going to walk as far as we go, there is no fear, there is nothing, we want to reach our goals,” he added.

Unlike other caravans, this day go slowly, because within the organization’s rules, women and children must be expected to prevent them from being left behind and being detained by agents of the National Guard or Migration.

Honduran Edgar Antonio Gutiérrez, who has been stationed at the southern border of Mexico for 14 months, commented that the authorities have them trapped in Tapachula and although he tried to illegally “buy” the official records, he was unsuccessful.

“With peace and freedom, we will ask the National Migration Institute to let us pass. They have us trapped, locked up and we want to seek our freedom, “he told Efe.

Most of the migrants walk with flags of their respective countries and a cross on the road where temperatures exceed 36 degrees Celsius.

This caravan is accompanied by activists Luis Rey García Villagrán, coordinator of the Center for Human Dignification in Tapachula, and human rights defender Irineo Mujica, director of the NGO Pueblo Sin Fronteras in Mexico, who said that the caravan is not looking for any confrontation and that migrants only want to be heard and have their needs addressed.

“We are going in the name of God and peacefully and what we ask is that the administrative procedures be taken care of,” they said.

Last Wednesday, García Villagrán and Mujica brought 46 packages with petitions to federal judges to allow the migrants to leave Tapachula in a caravan and continue their journey to the United States.

In the first days of September, the Mexican authorities thwarted the advance of four migrant caravans that departed precisely from Tapachula.

At that time, several UN agencies and NGOs criticized the use of force in the operations to disintegrate these caravans.

After about three hours of travel, the caravan faced and broke the first Siege of National Guard and State Police agents.

In the action, the migrants held hands, formed a block and advanced towards the line of federal forces, who were waiting for them with riot gear at an underpass.

Between shoves, blows and screams, the foreigners ran past the blockade that the agents deployed. In the containment of the caravan, several women from the National Guard were run over by the crowd and fell to the ground.

The crash, which lasted about 30 minutes, injured several children and women who were treated by Civil Protection personnel accompanying the march.

After the incident, the migrants continued their advance, guarded by State, Migration and National Guard agents, whose work is observed by personnel of the National Human Rights Commission (CNDH).

The state representative of the INM in Chiapas, Aristeo Taboada, told the media that the migrants “have been given the wrong information and are deceived” with which they will obtain a legal stay in Mexico.

The region has experienced an unprecedented migratory wave since the beginning of the year, with a historical flow of 147,000 illegal immigrants detected in Mexico from January to August, triple that of 2020.

The “mother” of the migrant caravans leaves Tapachula, Mexico this Saturday, with no less than 4,000 foreigners