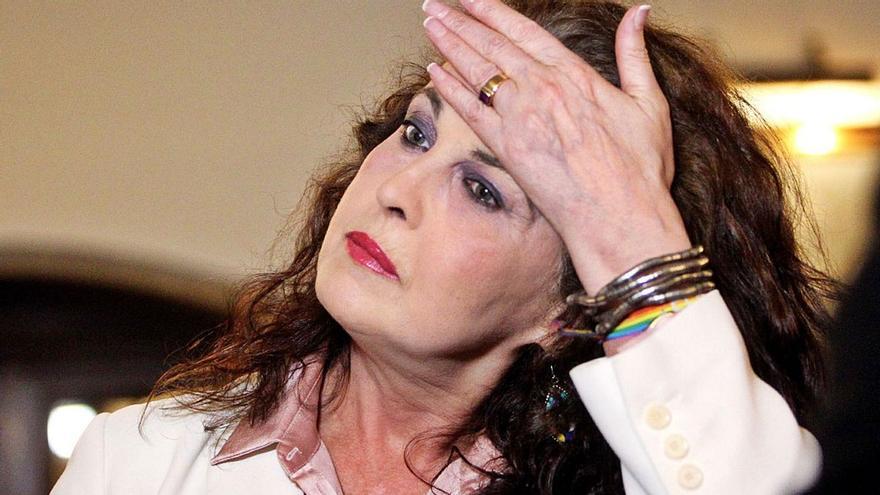 It is not usually spared a phrase from which to promote a controversy if with this it manages to make visible the harsh reality of a group that is about to secure a great conquest with the processing of the new trans law. That fight has been blurred in the last 72 hours by a reference from the far right Mariano Calabuig (Vox), who addressed the Tenerife woman in a disparaging tone Carla Antonelli (Güímar, 1959) in the Madrid Assembly, where the Canarian is a deputy for the Socialist Party. “The generic male is accepted by the RAE“, he specified after the PSOE leader declared that he was not” a generic male “:”I am a woman in the singular“.

The actress and LGTBI rights activist assures that “none of this arises by spontaneous generation; every reaction triggers a counter-reaction and the trans collective has been suffering from harassment and aggression for more than a year and a half … The extreme right could not stay back and continue to tighten the rope with surreal, dangerous and shameful behaviors. Not everything goes here. They want to hold us responsible for all the ills of this country, but attitudes like this are unfair and regrettable “, has denounced regarding the comments of the Vox deputy in the Madrid regional executive.

Antonelli is clear that at his age no one is going to question his identity, but stresses that “there are children who are growing up in a social model in which there are people who continue to be determined to put an indelible watermark on them that makes them feel marked for the rest of their lives. ”

This stigmatization that is still evident in the trans community is what infuriates Carla Antonelli the most when she talks about a non-existent equality: I do not know for what purpose the women’s bathrooms, because they do not clarify it, but with the idea of ​​causing inhuman situations and debates loaded with perversion, “he denounces.

A member of the PSOE since 1997, Antonelli believes that if she, who is a deputy, has had to endure situations such as those promoted by Mariano Calabuig, what “anonymous people will not be suffering daily… Ask the trans boy who had his face smashed in Toledo or who was beaten up in Pamplona “, he put as examples before launching a desperate cry in favor of harmony.” Do not feed this spiral of I hate … Stop getting into other people’s panties and underpants, “the woman from Tenerife underlines.

“The glass is overflowing”

“Mariano Calabuig is just one more drop that has fallen into a glass of water that is overflowing… We are at the limit and we cannot allow behaviors like those that occurred at specific moments in our history when a deranged who seemed innocuous sent millions of Jews to the gas chamber … We are not going to allow four crazy people to give the pleasure of living another night of broken glass, “he says about the humanitarian excesses committed by the Nazis.

Verbal attacks are for the Canarian deputy in the Madrid Assembly just as serious as the physical attacks that “we read from time to time in the newspapers or hear on radio stations … Words are not carried away by the wind and, therefore, semantics is a weapon that is loaded with unpredictable results, “he denounces without losing sight of the fact that” we are going to defend tooth and nail the rights that belong to us; those that were stolen from us in a part of our history and that We are trying to recover from the beginning of Democracy. For the people who continue to fight and for those who stayed on the road, we are going to fight until the end because this is a battle that we are going to win “, he makes clear in a phase of the conversation in which it is allowed to give advice to the intolerant: “If someone has a sexual problem, buy a Satisfyer or a Tamagotchi.”

The first and only transsexual woman who, for now, has acceded to a political position in Spain considers that “50,000 trans cannot be considered a threat to women of this country or for the 47 million people “who live in the country, adding that” we cannot continue to be the pim, pam, pum of some repressed who try to position the trans law as a matter of State, when what is It is about obtaining rights that belong to us “, he points out while” it is time to banish once and for all those who encourage a feeling of animosity towards the trans community. ”

Regarding the cracks detected between the Government partners when scheduling the steps to follow in reference to the processing of the trans law – it has been criticized that at first there is no will to address the issue in the council of ministers of the February 23–, Carla Antonelli considers that “All this is the result of a false controversy that they intentionally want to air to generate a sense of enmity that is not real: the trans law will go ahead yes or yes… It is a firm commitment from Pedro Sánchez; It is also an objective of Minister Irene Montero that I do not have to distrust, “she defends tooth and nail without shutting up in the face of possible critical voices that have been heard in recent days.” I am a socialist, it is included in the coalition agreement and we have worked on our program for years … If someone on a personal level, not in the mouth of one party or another, wants to say something against that is brave and speaks for him or her, not on behalf of all “, concludes.