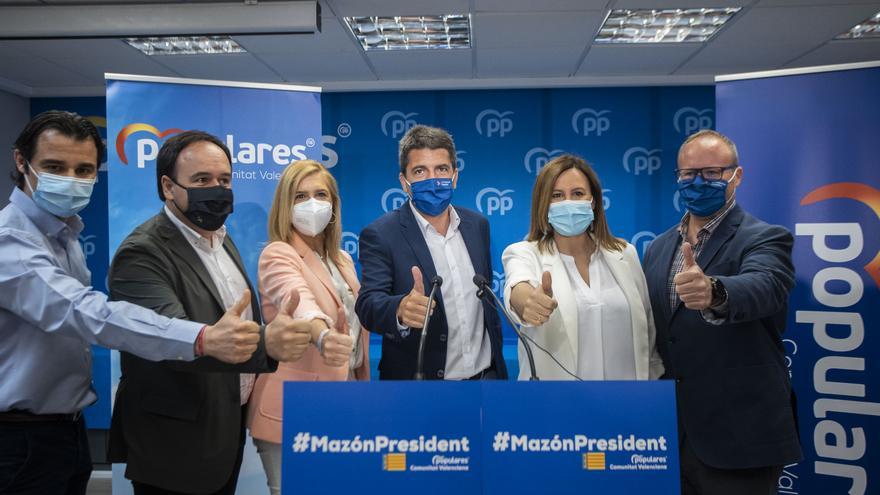 The president of the Provincial Council had marked his roadmap for months, but he wanted to be faithful to the times of the party in which he has been active since . So he waited for Isabel Bonig to announce that she was leaving the first political line to confirm that she wants to become the next leader of the popular in the Community.

The candidate to lead the regional leadership embarks on this race with two objectives: to strengthen the organization and turn it back into the first electoral force. At all times, he kept in mind the work carried out in this province to broaden the base and reunite the center-right and, from that experience, he wanted to make it clear that he would transfer the same project to the Community. This game began when the general secretary of the PP, Teodoro García Egea, recovered Carlos Mazón from the past to place him in the Diputación. And after two years of constant promotions, now the provincial leader is going to pivot his project around three fundamental axes: employment, lower taxes and the defense of traditional sectors. In his first official act, the Spaniard traced the model of Isabel Díaz Ayuso to defend the freedom that the Community needs in matters such as health, the economy or education and charged against the Botànic’s policies due to the high rates of youth unemployment, the support for nationalisms or what he considers a lack of forcefulness when defending the transfer or financing. «We reveal ourselves to this situation because we defend a Community where there is educational, health, and economic freedom. A Community that defends its identity without complexes before anyone ». And it is that the path that is outlined in the ranks of the PP to face the policies of the Botànic goes through not losing sight of the story of Isabel Díaz Ayuso and prioritizing the economy. The popular ones had always remained in recent times in that devilish dichotomy between the more moderate speech of Alberto Nuñez Feijoó and the most extreme of Vox. But after the political earthquake caused by the elections in Madrid, Genoa has imposed the Ayuso model to awaken the reaction of the middle classes that had a hard time with the 2008 crisis and are now desperate with the pandemic. It is to this audience that Mazón is going to direct his message. After the elections in Madrid, the Valencian Community has become the center of attention of the popular. It is in this territory that the battle for the votes will take place and it is here that Carlos Mazón will try to launch a differentiating message to gather up voters who are disgusted with the Botànic’s management.

The meeting with more than 200 leaders and supporters in Valencia. information

The slogan of Mazón’s campaign is nothing less than “Mazón president”, which provoked more than one critical comment among socialist circles, which understood it as a clear fight against Ximo Puig. During the event, the Alicante-born man made it clear that his plans are not to leave the Provincial Palace and that he will continue to bet on the successful model that unites the institutional leadership of the Provincial Council with that of the party. The president of the Alicante Provincial Council will run for the presidency at the regional congress to be held on July 3, as he sees himself “capable and with the necessary strength to lead a project for all.” This was stated before dozens of media in the same headquarters in which just 24 hours before Isabel Bonig was excited saying goodbye to politics and renouncing the act of regional deputy for not having the confidence of the current national leadership of PP. Precisely, Mazón’s first words were addressed to her, assuring that she had not made this announcement before to respect her fellow party members, the process and also Bonig, whom she thanked for her dedication and generosity, and of whom she said that she has proved to be “a party woman.”

It is obvious that Mazón has the support of the national leadership of the PP, but he wanted to make it clear that there will be no favoritism in the congress. He said that he maintains a fluid relationship with the leadership and, although he acknowledged that he returned to politics a couple of years ago at the hands of the president of the PP, Pablo Casado, affirmed that the endorsement he seeks, which is that of his colleagues and affiliates, it has not yet occurred. “There is no appointment of the national leadership, it would be a breach of the statutes,” said Carlos Mazón, noting that, for this process, his relationship with the national leadership has been to communicate that he had made the decision to take a step forward and it went well. received, “like anyone else’s,” he said.

Also Read  What is the most viewed on Facebook? His attempt to explain it ends with a failure in transparency | Digital Transformation | Technology

Accompanied by the members of his campaign team, who will be directed by the spokesperson in the Valencia City Council, María José Catalá, the candidate gave the starting signal to start the process with the collection of guarantees to be able to formalize his candidacy, after having undertaken « a calm and orderly process of reflection »that has brought you here. Mazón, who hopes that Catalá will be the next general secretary of the PPCV, will have the mayor of Finestrat, Juan Francisco Pérez Llorca, as regional campaign coordinator, and the senator for Castellón Salomé Pradas and the mayors of Torrevieja, Eduardo Dolón, and Xeraco , Avelino Mascarell, as provincial coordinators. After defending the management carried out at the head of the Alicante Provincial Council, which he has presided over since July 2019, the popular leader stressed that the PP is prepared to give “the last push it needs to win” the next elections to the Generalitat. He hopes to be able to reach “a meeting point” with the rest of the candidates who come forward to lead the PP in order to reach the regional congress together, and he indicated that he would not have cared if Isabel Bonig had decided to present her candidacy.

He also made reference to the escape of charges of Citizens to clarify in Valencia that his pact in the Diputación with the oranges is armored. Regarding the possibility that these deputies, or even the ex-Citizen Toni Cantó could enter the PP, Mazón advocated for the reunification of the Valencian center-right, for which he said that, if there are Citizens deputies who believe that the PP should be helped , «Fantastic», because in this game they have «open arms».

Also Read  Winter time change in the US: What day does it start and in which states does it apply?

Carlos Mazón is concerned about the influence of the PP among young people and yesterday he affected the low rate of youth employment as one of the challenges he wants to face in this new stage. The low penetration of the popular in the younger age groups and the low incidence of New Generations are two of the issues that he will deal with from now on. Carlos Mazón, who was general director of Youth during the presidency of the Generalitat of Eduardo Zaplana, assured that he is proud of the legacy he left, since he ended the legislature with 13% youth unemployment, and now there is 42%.

Marta Barrachina will begin today the renewal of the party

Marta Barrachina, mayor of Vall d’Alba, will be elected today president of the PP of Castellón in the fifteenth provincial congress, with which the mandate of Miguel Barrachina, who resigned to opt for reelection, will end. Marta Barrachina this Saturday will have the support of the general secretary of the PP, Teodoro García Egea, as well as the presidents of the PP of the provinces of Alicante and Valencia, Carlos Mazón and Vicente Mompó, respectively; and the president of the PP of Valencia city, María José Catalá, among other institutional and political positions.