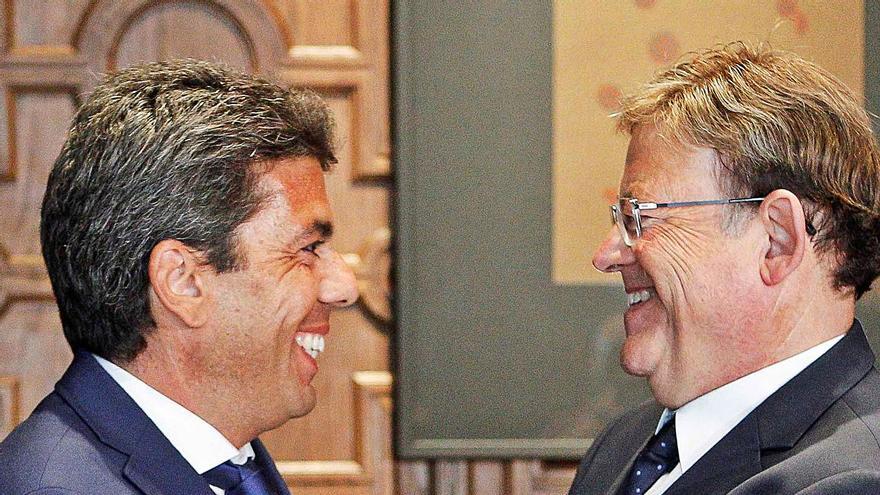 Carlos Mazón will speak for the first time in the Cortes tomorrow, Monday. Uploaded to the wave of the victory of the PP in the Madrid elections, the president of the Alicante Provincial Council will stage his debut in the regional Parliament in his race to become the new president of the popular Valencians. His intervention is part of the processing of the Cooperation Fund Law that the Alicante Provincial Council has been rejecting for five years, but, although the leader announced three months ago his willingness to position himself in the Chamber against the criteria established by the Consell in this distribution of aid to the municipalities, his message will be looked at with a magnifying glass, and not only because of his position in the Provincial Palace, but he will be examined as a regional leader of the PP that for the first time faces a new scenario in which the rest of parliamentarians is totally accustomed and in which he must demonstrate if he can put together a convincing Valencian story. Separating these two facets is complicated and, now that the countdown to the celebration of the regional congress has begun, this will be the first round that he stars in Ximo Puig’s field. Therefore, among the opposition, and also among his own, there is expectation to hear his words and assess how he unfolds for the first time in the Cortes.

Carlos Mazón, who has already resolved his fit in the PP with the seamless support of Genoa, does not usually have this speaker to gain visibility and, precisely for this reason, tomorrow’s opportunity is key to show whether, in addition to being a benchmark in Alicante, it can also be in Valencia and Castellón. It is his first official act since he announced his candidacy to become leader of the Valencian PP and it comes to him like a glove to mark positions against Ximo Puig in one of his main political struggles since the beginning of the mandate. Although the head of the Consell is not present, there is no doubt that the Alicante leader will address him at all times. As Isabel Díaz Ayuso did with Pedro Sanchez. The PSPV will try to dilute its presence and downplay its act, but the truth is that no one at the Palau is aware that Carlos Mazón has his sights set on Valencia and that he will try to gain notoriety on the regional scene thanks to this commission in the that the hearings of experts and political leaders will be held to enrich the Cooperation Fund Law. The strategy of the PSPV goes through trying to isolate its opponent, who will also go with the provincial deputy Adrián Ballester, one of his strong men. The Botànic, for its part, will have no less than eleven representatives. Among them, the presidents of the Valencia and Castellón councils, the socialists Toni Gaspar and Josep Martí, will participate, as well as other left-wing municipal positions. The president of the Valencian Federation of Municipalities and Provinces, Rubén Alfaro, or the socialist spokesman in the Provincial Council, Toni Francés, will also be present. The deputy in charge of replying to Carlos Mazón will be José Chulvi, general secretary of the Alicante Socialists. The position of Citizens will also be key in this commission, whose provincial deputies have played two-sided with the Cooperation Fund and have not finished positioning themselves. The usual. But beyond the debate on these aid among the peoples, the message that Carlos Mazón conveys will be important from different points of view. And it is that not only does it have the objective of explaining why it is rejecting the Cooperation Fund from Alicante, but it also has to show that it also speaks in Valencian and Castellón language and raise the discourse to justify that this financing mechanism, done differently It would also benefit the rest of the Community. The socialists will press him to show that denying this program is an example of his one-sidedness and that his refusal responds to a political question. With this boycott, Carlos Mazón is leaving the Alicante municipalities without the 13.7 million a year from this fund to face current spending or investments, while the rest of the councils have joined and, in fact, have doubled the amount. But it is also true that the PP, with the support of Ciudadanos, has carried out several work plans to compensate the towns and benefit those with a smaller population. From the Botànic they will try to show that Carlos Mazón has a problem with the management and that, with his refusal, he is committing an outrage against the interests of the Alicante municipalities. His plans for works are branded from the left as an attempt to control the investment distribution rather than distributing money objectively.

«The hawks of the Palau saw that I wanted to intervene and they have presented all their mayors. It is a book anti-weed reaction, “said the Alicante leader, who is not going to position himself directly against the Cooperation Fund, but is going to limit himself to asking that two criteria be respected: the non-imposition so that each province can organize as it considers and the defense of the Constitution so as not to violate the autonomy of local entities. “I am willing to negotiate the Cooperation Fund and work on it, but I believe that small municipalities must be treated better and the Generalitat cannot impose how a province has to be organized when there is a specific reality that must be respected,” said Mazón .