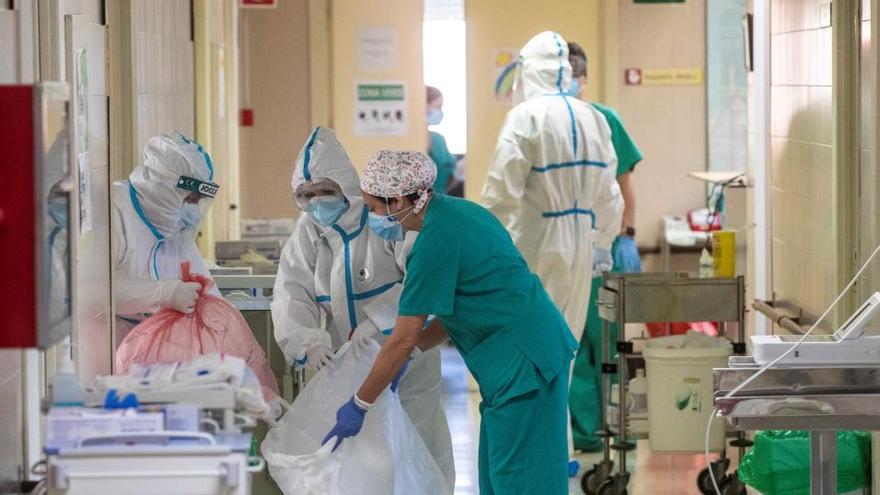 In four months Castile and Leon has set up in the old Valladolid residence a covid hospital with capacity for 188 patients to relieve hospitals throughout the Community, which has led to criticism of the toilets who denounce that the personnel “have been removed” from other centers and “have forced” transfers.

The idea is to have a resource for the entire Community that allow the other 14 public hospitals to continue with non-covid activity, these other serious pathologies that can be affected by the pressure of the pandemic, which in this second wave already has the ucis at 69%, and that almost 200 more beds for critics have been enabled, up to 520, and the hospital floors are listed this week to 72 percent of its 6,230 seats.

Launched on November 9, with 48 initial beds, this Thursday it already had 28 patients, a good part of the main hospitals in the Community, such as HUBU and Clínico and Río Hortega in Valladolid, but also in Palencia and Medina del Campo.

With a staff of 98 professionals, infrastructure has cost more than 3.7 million euros, to guarantee maximum safety against covid, with special ventilation systems, separate circuits for clean and dirty material, automatic doors with card opening or an own entrance for patients.

The main problem when starting it up, in principle only one of the two plants that will attend COVID, has been, as happens in all regional and national health, to provide it with toilets, at a time when job boards They are at zero in doctors and nursing and also the professionals are exhausted after the hard previous months and many also affected by the coronavirus.

“The templates are very tight in all hospitals and there are no personnel in the stock exchanges so the only option has been “for the hospitals to yield” where they can yield, “the manager of Valladolid, Eduardo García Prieto, explains to Efe, who states that they have hired every nurse likely to be hired , the same as any internist, neurologist or geriatrician.

“The idea does not seem bad but it opens without sufficient staffing”, which has had to “remove from other places”, or “force professionals to move”, when in addition there was already a resource for covid in the first wave, the Hospital Feria de Valladolid, “which was set up and dismantled with a lost investment,” the secretary of the Satse Community Nursing union, Mercedes Gago, told EFE.

The manager of Valladolid explains that in principle participation in the project is voluntary, through an attribution of functions, which unions like CESM consider in practice a “forced transfer”, as well as some of the “nominees” for this change of workplace, as is the case of an internist from Salamanca, who has declined to be a volunteer and will only go if they force him.

This did not happen in the first wave of the covid, where voluntariness worked with professionals from some hospitals who moved to others in the Community to lend a hand and work as a single large health area, recalls García Prieto.

Now in the second wave there is “a fatigue, almost exhaustion of health professionals”, with the addition that in the first wave they had all the support of the population, which now shows a certain degree of misunderstanding because the population is also tired and needs a normality of care “, reflects the manager of Valladolid.

At the moment the first part of the game is over, with those 92 professionals working on the first floor, but if the second is started, another 24 nurses, five or six doctors, 19 or 20 assistants, anticipates García Prieto.

The person in charge of Satse in the Community warns that recruiting toilets requires better contracts, since nobody is going to come to Castilla y León from other autonomous regions or from England for a two-month contract, or charging 600 euros less than the Basque Country, Navarra or Cantabria, and denounces that “people who run out hiring is not renewed to force him to go to other positions “.

García Prieto explains that in the first wave, the urgency led to the setting up of the Hospital Feria, with the same objective of serving the entire Community, but in this second the regional health opted for a more permanent resource and those two plants of the former residence, which in the first three has consultations, and which has two more still free that could be used if necessary.

It is a hospital aimed at very specific patients: covid patients over 15 years of age who need hospitalization, with a stable clinical situation, who may require assisted breathing but not be intubated, and without chronic diseases that may aggravate the situation, he details.

It is the Community’s own hospitals that select the patients who can go to this new resource, the Rondilla building, which takes the name of the neighborhood in which it is located, taking into account clinical and social situations.

“If it was an easy solution and did not pose any problem for the patient we would have all the plants full“, argues García Prieto, referring to the fact that it is necessary to move from another city, with what that means for the patient and the relatives, who can resort to the aid that is available for travel for this.

They are not patients who are going to be discharged in a couple of days, but they require a certain time of hospitalization, and this week there are more than twenty admitted, from different parts of the Community.

The idea is that this new structure is permanent and that it can allow the mobilization of people from the Valladolid Clinic during the works of that hospital and, in the longer term, it is proposed to transform it into a convalescent unit and a palliative unit for social and health hospitalization .